[ Power ] Animal Morphing (into a raven and wolf) 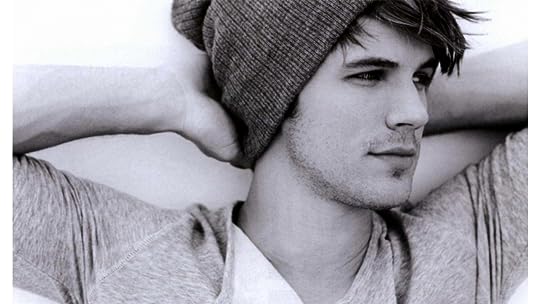 Physically, Tobias is described to be classically handsome and athletic, with a brooding, mysterious and intense aura. Physically, Tobias has a pale complexion, a broad forehead, strong bone structure (angular jawline), deep-set, blue eyes like lapis lazuli, a straight nose and a well-formed mouth. He has straight, short, light brown hair with faint natural blonde highlights. Tobias also has straight teeth with a heartwarming smile. Tobias is of slightly above average height, about 5'11", and he has a lean, flat-muscled and athletic physique.

[ Dressing Style ] He is often seen wearing darker colors such as black, grey and dark blue although sometimes, he does wear lighter colors. He is often seen wearing t-shirts, shirts or sweaters of darker colors and in various styles (such as short-sleeved, round-necked and v-necked shirts). He often wears dark or black jeans with a belt with black, leather boots with a buckle. On occasion, Tobias will sometimes wear black leather jackets. Tobias will wear more formal clothing, such as suits and tuxedos, if he is either attending a formal gathering/event or a special occasion.

[ Personality ] When Tobias was sixteen he was a reckless and impulsive person. He enjoys partying, drinking and girls, often getting himself and others into trouble just for fun. He considered himself a novelty, as he always pulls off the crazy stunts and makes the wise cracks for entertainment. Although he was somewhat flirty with other females, and would make out with those who caught his eye, he was not necessarily promiscuous, considering he remained a virgin. Tobias also held very little respect for authority figures, often mouthing off to teachers and earning himself detention. Tobias could also be somewhat violent towards those who antagonized him. He had a reputation on campus for being someone who you did not want to pick a fight with, especially after he broke a boy's arm in the ninth grade. Basically, Tobias was not all talk: not only can he shoot out hilarious and seething comebacks, but he can pack a mean punch too.

However, as time passed, especially after he was told his father and sister's death, Tobias began to become much more grounded and responsible. He thought through his actions much more, in contrast to his old reckless self, shedding some of that old impulsiveness. He also showed that he had become much more practical. Despite his changes, he still uses what his parents call "Tobias-logic". Tobias-logic mostly just entails trying to find loopholes in everything in order to rationalize doing something unreasonable, or when Tobias tries to justify something that makes little sense.

Tobias has very powerful protective instincts. He cannot stand to sit back and see people get hurt, always trying to do something to help wherever possible, even if for a complete and total stranger. He is extraordinarily devoted to helping innocent people and protecting the others. Most often, this protectiveness was directed towards his sister, although he has shown to be protective over others.

Tobias can be very sarcastic and sharp-tongued at times. He always has a smartass comment ready whenever someone says something antagonistic to him, and always bites back with a witty insult. He doesn't hesitate to speak his mind, and can be extremely stubborn in his opinions. He can still be rebellious towards authority figures.

Although Tobias is not necessarily conceited, he is very aware of the fact that he is handsome. He is rather proud of his body. Also, although he has become much more practical, he can still be somewhat vain at times about his appearance, taking pride in how he looks.

Despite many changes in his personality, Tobias remains a social creature. He could be friendly, warm, not shying away from meeting new people, and has considerable skill in social interactions.

Tobias also is shown to be adept of using his masculine wiles. E has shown an ability to seduce women and sweet talk them into giving him what he wants. Tobias has also showed an ability to read people. He is excellent at reading body language, noticing things that others wouldn't. Tobias can also be somewhat prejudice in some matters.

[ History ] Tobias Roman Daray was born to an unknown father (power and kingdom unknown) and Lenobia Daray, roughly a year after his older sister, Aurora. If his father had known about him and had his way, he would have been named Loren, after his father.

During the time after his mother's first child was born, she was suffering depression because of her strange feelings of rejection towards her daughter. Hoping to help Lenobia, her mother, Serefine, secretly gave her doses of Healer blood, hoping to "cure" her depression, unaware that she was pregnant with Tobias, therefore making her grandson an "accidental" experiment.

Eventually, Lenobia ran away from a man searching for her hand in marriage, with her mother and her aunt, Qetsiyah. She would have just left him, but realized that he would come after them, so she hoped to kill the man to protect her unborn child. When she and her mother and aunt believed they had finally succeeded, she ran from the main city world and culture, claiming that the suitor had turned her first child into a monster and wouldn't let him do the same to her other, fled to the outskirts of the shapeshifting kingdom to raise Tobias away from her past, where her family later followed them.

Lenobia hoped that Tobias would have a blind Inner Eye and be unable to shapeshift. However, Tobias saw the transformations of others perfectly fine. Growing up, he was led to believe that his father was a deceased soldier and that the box in her mother's room with the initials A.K. were his.

When Tobias was sixteen, he moved back to the main kingdom and changed her name to his middle name Roman.