I'm not sure exactly where to post this, but, today as I was looking through a few book blogs, I came across the cover for Elizabeth's new book The Unwritten Rule. Amazon says it comes out April 6th, 2010 which can be subject to change etc. Anyways, I thought I'd share it with you guys. :D 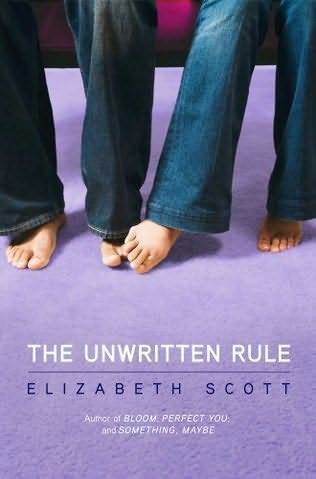 There's no summary yet but based on the excerpt Elizabeth posted in this group a little while ago, I'm assuming it's about a girl who's in love with her best friend's boyfriend.

Mod
It is about that.

Mod
And Michelle, YES, I confirmed with Elizabeth that that is the cover. LOVE THE COVER!

Mod
Except for there is a review in the middle, otherwise yes!

I cannot wait for this!

I have the inside jacket copy for The Unwritten Rule (yay!!):

Everyone knows the unwritten rule. You don't like your best friend's boyfriend."

Sarah has had a crush on Ryan for years. He's easy to talk to, supersmart, and totally gets her. Lately it even seems like he's paying extra attention to her. Everything would be perfect except for two things: Ryan is Brianna's boyfriend, and Brianna is Sarah's best friend.

Sarah forces herself to avoid Ryan and tries to convince herself not to like him. She feels so guilty for wanting him, and the last thing she wants is to hurt her best friend. But when she's thrown together with Ryan one night, something happens. It's wonderful...and awful.

Sarah is torn apart by guilt, but what she feels is nothing short of addiction, and she can't stop herself from wanting more...

Yay, a summary! I'm even more excited now. :D Thanks for the update Elizabeth.