Name: Poppi
Gender: female
Age: 15
Appearance: long curly dark brown hair, big dark hazel eyes, fair skin, 5'1"
Personality: quiet, shy, proper, lady-like
Background: Her family is nobility, fairly close to the crown, and very wealthy. Her mother "died" a few years after she was born and her father never remarried. She is an only child, and doted upon by her father.
Other: Lenna's her best friend. Her father is one of the few who loved Chaos (Poppi's mother) without going insane. She's a demi-god with the power of... night, although she knows of neither.

Oh yeah, not like her though. That was an... interesting movie, to say the least.

Name: Clarissa
Age: 15
Personality: Very outgoing and aggressive but that can get her into trouble in the noble dominated world of Ancient Rome.
Background: Lived in Northern Africa but captured when 6 as a war prisoner. Was a slave to Poppi? and was set free when she was 13. Is now a free plebeian (civilian) but still works in Poppi's household.
Status: Freed Slave, poor
Looks: African and very dark skinned but wears her hair in a rolled bun like most regular Romans. Always wears snow white tunics.
Other: Aspires to be a senator, which is impossible to attain for a girl and a slave like her.

Name: Lenna
Gender: female
Age: 16
Appearance: slightly wavy long dark hair, green eyes with a dash of gray, fair skinned, tall and beautiful.
Personality: kind, soft, caring, out going, out spoken.
Background: Comes from a Rich family background. Her father is one of the greatest and bravest head soldier of the king. She has a mother named Marie and a fahter named Maccalus.
Other: Poppie's best friend and has a brother named Ronan

Name: Ronan
Gender:Male
Age:16
Appearance: 5-3 brown hair, bright green eyes
Personality: Strong willed and responsible, but has a fun side as well
Background: Rich, but is not a gladiator person thing.
other: none

Christopher wrote: "Was that about my question"

idk, I'm not a mod and didn't create this rp

((can Ronan also like Poppi, that would be interesting))

Christopher wrote: "yea sence this is ancient rome can we have a mithical creater form that time or maby even a demigod."

can someone make a Tobey, who wants to marry Lenna, we have him in the story but no one to play him

Personality: Kind
Background: was born poor
other: Is a demigod dosen't know witch parent was a god has the power of fire is a orphan.

can Lenna have a crush on Sam?

Campbema wrote: "((can Ronan also like Poppi, that would be interesting))"

name: Chaos/Neiv
gender: female
age: immortal, appears the age of about 21
goddess appearance: long curly bright yellow-orange hair that is constantly moving, multi-coloured constantly changing eyes, fair skin, beautiful
Lampade appearance: straight long ivory-black hair, orange and brown eyes that sometimes flicker like fire, pale skin, slight
species: goddess
disguqise: Lampade (dark/shadow/death nymph)
other: Fights with magic rather than relying on weapons.
Lampade powers: fire, darkness, chaos, madness
goddess powers: chaos, the four elements (Based off some minor research, but I've never heard that before.), madness, darkness
background: Wanders, often with chaos in her wake (literally). All her previous loves have been driven insane only to slowly die. Woke up from her long sleep and fell in love with Antanas, and Poppi was born a few years later. She was summoned to Mount Olympus and had to leave, but not before bestowing immortality upon her daughter.
Other: She is the goddess Chaos, disguised as a Lampade. Poppi is her daughter. She is not, however, married to Antanas. She has been petitioning Zeus to make her daughter (Poppi) a goddess, without so much as asking for her daughter's opinion.

She seems oh so cheerful.

I love them both!

name: mara(egyptian name)
gander:female
age:12-13
race: egyptian
social class: slave
apperance: dark skin, though not african american dark, wavy hair cut short by master to signify she was a slave, round, atractive face, short, skinny and under-fed.
personality: you shall soon find out, MuAhaHaHAAHA
OTHER: has BEEN seperated FROM family BACK in EGYPT seence age of 4.

Other: Sam is her son.

Does that work? Do you want me to add anything?

Name: Antanas
Gender: male
Age: late 40's
Appearance: greying curly brown hair, small beard, hazel eyes, 5'10", fairly fit
Personality: kind, caring, intelligent
Background: Fell in love with Chaos a few years after she woke up from her long sleep and they fell in love. Poppi was born a little later, but then Chaos had to leave. He told Poppi she'd died because he didn't know what else to say.
Other: Still hopes Chaos will return someday. 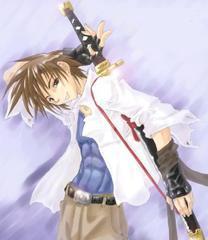 Personality: evil
Background: wants to rule the world was throughn into the underworld by sam four years ago befor he meet lenna and ronan
other: Is a demigod his father is hades (hope you guys don't mind me useing the greek name) and thats how he got out of the underworld.

name: violet
age:17
apperance: long blond hair, beutiful blue eyes, light tan
personality:outgoing, sweet, kind, fun
background: her mother is very known. her father is a very famos solider, and her broher is training to be a gladiator tough violet is not happy about it
other:mother is cia and father is careil, brother is simon