Mod
So since I want to shoot this group in the heart with some adrenline in a last ditch effort to save it from final annilation I am changing some stuff. Namely adding some new twists to our ever lovely RPs. And first up? Hate the Living Love the DEAD!!!!!

So here it is:

The world is coming to an end. It is armageddon. But no one could have guessed how it would happen. At first it was thought to be a sink hole. Just a small hole, only a few inches wide, appearing in the ground in the middle of Kansas. But the hole didn't stay small. It got bigger inch by inch every day for two months. Kansas was evactated as it began expanding faster. That was three months ago. Kansas no long exists. It is just a massive hole in the ground with seemingly no bottom.

Three months ago. It seemed that is was just a freak of nature, the biggest sink hole in human history. But after just two short weeks, they began crawling out. Monsters. Millions of them poured out and began the end of this world. The United States is in shambles. I, under the orders of President Lee himself, have resarched these monsters; their strengths, their behavior, but most of all their weaknesses. I have found that there are a few different types of them.

So if you are reading this, then please use it to kill as many as you can.

Rarity: The Most common of all the Undead.

Appearance: Ghouls look much like the old zombie movies. Walking Corpses: Flesh rotting and falling off, clothes in shables, and most of the time covered in blood.

Behavior: Ghouls do not seem to think, instinct alone drives them, particularly the instint to eat. They are the cannon fodder of the undead. In large numbers they can easily over come just about anything, hence the nickname by soldiers as the Horde. However even in large groups they are mindless. The only time this changes is when someting else is leading them. When they are being led, they are nearly unstoppable.

Strengths: No amount of damage to their bodies seems to be able to stop them, it is only after their brain is damaged that they can be stopped. They are quite fast and strong when a leader is with them.

Weaknesses: Without a leader they are quite slow and not very intelligent. And idividually don't pose much threat.

Notes: These are the cannon fodder for the armies of the undead.

Appearance: Little more than skeltons these creatures seems to be nothing besides a walking skelton often dressed in torn miltary fatigues.

Behavior: Lichs are the most common leaders of the Horde. Often they raise the dead to join the ranks of their Ghoul army. They do not however seem to come out in the open or fight on the front ranks.

Strengths: With a Lich around the Horde becomes nearly unstoppable, which makes finding the Lich nearly impossible. Their uncanny ability to raise our dead for their army of Ghouls makes them a monster to be feared.

Weaknesses: Alone they are weak and easy to kill, once they are killed their horde turns back to the slow mindless zombies they are. Because tehy are nothing but bones, killing them is quite easy.

Notes: Most Lichs have only 80 to 100 ghouls in their Horde.

Appearance: Their Appearance is easy to describe - They are giants standing 15 feet tall. 15 Feet of rage and flesh. Their bodies look to be sown together some parts of skin being darker than others.

Behavior: Behemoths do nothing without their masters command. They are massive slaves who destroy anything in their path with raw strength. without a command they do nothing but wander aimlessly. But with one they are undead wrecking balls.

Strengths: Their sheer size makes them nearly invulnerable to even tank heavy fire. It also gives them enormous strength and endurance. Once a command is given they will not stop until they are dead or it is given even if the leader dies.

Weakness: Because they are slaves, they can not act without a leader giving them comands. And if their command is met without a new one being given they becom docile. No Physical Weakness known besides a fear of water/not capable of swimming.

Notes: If you see one DO NOT COMBAT without backup.

Appearance: They appear as nothing more than the spirits of women in white dresses. Innocent to look at until it hears you...

Behavior: Their crying is what you hear first, until hear you. Once it has you hear the wails strong enough to crack glass. They command the Behemoth's into battle when needed but even on their own they should be considered dangerous. Their bark is much bigger thean their bite.

Strengths: Their sense of hearing is so strong even breathing is ill-advised around them. Alone a banshee can destroy walls with just it's wail. The bility to walk through walls has often given them advantages on enemies

Weaknesses: They are blind and do not take orders from anything besides the Abyss Lord. Meaning they tend not to get along with others of the Undead besides eachother and their pets the behemoths.

Note: No speak, no breathe, no sound, or no life.

Appearance: Unlike their soldiers and comrads, they are by far the strangest, looking nearly entirely human besides their jet black hair and pure alabasta skin these creatures are no differnt then us.

Behavior: They are what comes after the horde. Sanguine are genrally used to elimnate what the horde cannot. If an army of ghouls can't over take it, the sanguine are sent in. But the most telling of their behavior is their drinking of blood. Blood is their wine, and if they go long enough without it they become more beast then than anything.

Strengths: While not invulnerable, they are stronger, faster, can take much more punishment, and often more cunning then humans.

Weakness: Their thirst for blood can often drive them to make stupid mistakes. And the sun burns them, so much so it can burn them to ash in five minutes.

Notes: No one has ever "turned" after being bitten. Their leader is called "Sanguine Lord" who is assigned by a reaper.

A.K.A: Robed Ones, Death, Arch-demon

Appearance: Black robes are the reapers tradmark, you see it and you know. Death has arrived. No information is known on what is under the robes.

Behavior: They command the armies. Lich, Ghouls, Sanguines, and Behemoths. Analizing their eneimes and commanding accordingly it was because of the reapers our armies fell.

Strengths: Nothing has ever killed one.

Notes: If a reaper is seen, do not retreat, FULL SCALE ATTACK retreating is pointless.

A.K.A: Satan, Hades, Devil, Monster, Him, He has many names

Rarity: There is only Him 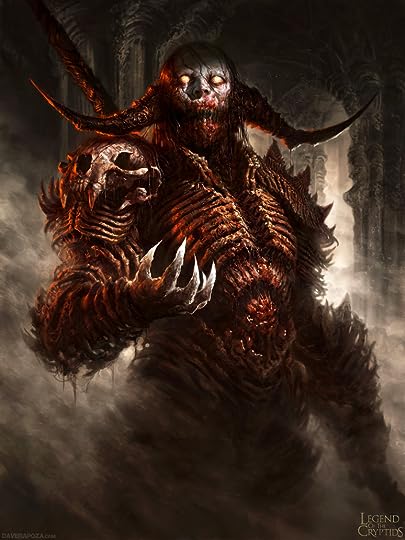 Notes: All research attempts closed due to danger level.