Off in the formal dining room, a letter appeared from the ashes of magic and slid, swaying like a maple leaf to the mahogany table's gleaming surface with such skill it avoided even a patch of wet from earliness's breakfast.

On it, the words were the following, 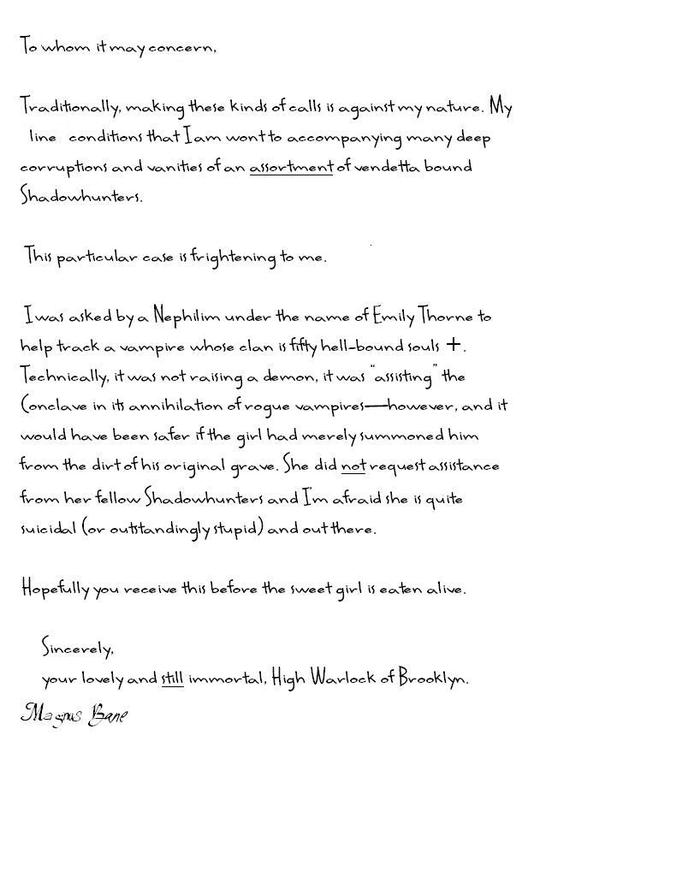 ((Easier to read version... this has to do with the RP, it's something written badly by me, not some random picture.

((I must say, After hundreds of years of practice, you think his handwriting would be nicer. (I'm teasing here guys)))

((Totally! I thought the same but then... It's that he can't remember his centuries before very clearly. If he can't remember faces and names, I wonder if his calligraphy suffers from the same senile funk. His mind is constantly sorting through what is necessary to keep during the century.))

Fira walked in with Darcelle, chatting companionably about knives.

Darcelle's eyes skimmed the dining room from top to bottom, missing nothing. "I prefer lighter daggers myself," she replied, a small piece of paper catching her eye.

((You know you're in an over emotional mood when you start raining teardrops for a Nightcrawler quote X(. "The Lord is my shepherd. I shall not want. He maketh me lie down in green pasture. Yea, though I walk through the Valley of the Shadows of the Death, I fear no evil for thou art me."
It's very Shadowhunter to say.))

"I like the light, long ones for short distance... But for long distance, the short, heavy ones. That way they never see them coming until it's stuck in there face." Fira explained. She spotted an envelope lying on the table.

"Ease of use and mobility," Darcelle explained, walking around the giant table towards the lone paper.

((I don't know how to add to those words. It's not like Warlock Bane is actually there. The paper has to just sit and watch until a decision of contact is made.))

Fira went the other way towards the envelope, skimming her hand across the top of the table and the occasional chair. Once she got close enough, she spotted the name "Magnus Bane" written elegantly across the top. "Magnus Bane? Who is he?" Fira mused quietly.

((How about this: It's like in Harry potter, where Tom Riddle writes back through the paper... Fira and Darcelle decide to write on the paper and Magnus writes back... You could write as Magnus))

"Bane, Bane..." Darcelle racked her brain for a hint of who that was. The name sounded familiar... "High Warlock in New York, I think," she finally dragged up from a corner of her mind.

Fira reached toward the envelope, and it seemed to come to her hand. She opened it, and quickly skimmed over the fragile paper. Her eyebrows came together and her mouth frowned deeply. "What a tremendously stupid girl!" She exclaimed, handing the parchment-like material to Darcelle. She kept the envelope in her hand, not noticing there was also another item in it.

Darcelle quickly scanned the letter, frown deepening as she read further. "I could not agree more," she replied, scowling. "The letter says nothing of a location."

Fira looked inside the envelope again, and pulled out a thing cutting of paper; on it was etched a crude pen, and in the same writing as on the paper, it said: "Write back soon..." As Fira inspected the paper, she turned it over in her pianist-like fingers. Suddenly, it turned from a 2-D pen into a real, live pen! It was red with gold trim; save for the writing on it, which was in silver.

A little blood coloured pen slid out, smacking the surface of the table like a failed baton act.

To it, a warm light etched itself into the papers fabric leaving a trail of glittering light in the form of words. The paper seemed to sigh as those firm words had time to sink in.

I suppose this is where I begin writing.
Unfortunately, this sheet of paper doesn't come with an owners manual for those who are particularly daft. We won't be having that problem, hmmm?
Now, with the pen given, I can instant message you through this sheet of paper. There is only so much space so make sure to use it valuably.

Without saying anything, Fira snatched the paper from Darcelle, she scribbled out a reply, saying:

Dear Magnus,
I've never heard of you and I know plenty of Warlocks; you are a tricky kind. Do you know the location of this Emily?
Sincerely,
Fira Dawnstrider

Darcelle watched, with slight amazement, as glittering words etched themselves motor the paper she was holding. "Fira, did you by any chance find a pen? It seems we will be communicating with this Magnus Bane right now."

I do not, Fira Dawnstrider.
Vladimir Zaslavsky, the shameful vampire she's been trying to get her knives in has just arrived in town. There's a hideout at Hotel Dumort. FWI, you probably shouldn't go there without aid. The head vampire recently passed away and the new one is a bit eccentric.
If Vladimir and Raphael meet, you may have more on your hands than the song Bromance.

Fira read it quickly, and chewed on her lip in concern.

Magnus,
Where is Hotel Dumort? And I think you mean FYI, correct? How many shadowhunters do you suggest we take?
~Fira Dawnstrider

Darcelle read over Fira's shoulders the words slowly appearing on the paper. "Hotel Dumorte... I haven't been in New York long enough to acquaint myself with this locale. As for backup... I know only one other Shadowhunter besides you so far."

((My spelling. TT_TT Trying to sound like txt talk from someone who doesn't text.))


How many Nephilim does it take to screw in a lightbulb?

As many that won't kill the whole population of Downworld in an act of pride--as in the closest, least reckless ones, if possible.
I'll meet you at the doors of the Hotel. Dress warmly, you don't want them getting to your necks.

Fira practically growled. Herself, brand new here, already asked to a job with some vampires, because this Emily was being stupid. She had no idea how many it would take; it simply depended on how the Nephilim where trained in that institute and where they were on their training. She would need at least a week to draw conclusions on who to bring to what. And he still hadn't told her where this Hotel was at! And how could she tell who were the prideful ones and not! And where were all these shadowhunters in this institute! Where was she supposed to get the gear needed! All she had brought were her weapons, a few books, and clothes! Not gear, not gear at all. Fira glared at the table. She swore, it was practically trembling under her stare.

Fira loathed that stupid address. This warlock should have the most elegant handwriting available. But no, his writing looked worse than a 2-year-olds. Fira knew she was acting terrible, but she couldn't help in. She liked getting eased in, not shoved in then slapped with a shovel!

After a few moments of silence, Darcelle said suddenly, "I can get us gear. And I can get us one more Shadowhunter." The anger rolling of Fira was almost a tangible thing, thickening the air, but Darcelle wasn't angry. She was ready. Ready for something to happen. There had been too much inactivity lately for her, and she felt the need to do something like a stone weighing her down. In the back of her mind, a quiet voice asked if this was because of her father. Darcelle denied it the pleasure of pressuring her any longer. It was for her.