The Wide Web of Friends in YA Books discussion

Mod
Are you excited for this movie? What do you think of the casting and trailer?

I Love The Cast:)

The trailer is AMAZING!

I Love The Cast:)

The trailer is AMAZING!"


I second that! I'm so freakin excited for this movie!

*screams and jumps up and down*

I can never spell his name right......its Theo with an O james

Mod
SAME!! I am so ready for this XD

Mod
I don't know how good this movie is going to be... I'm excited but I don't want to get my hopes up!

Mod
Can't wait for this movie.

Mod
In my opinion the casting is perfect and I have high hopes. I <3 Theo James!! 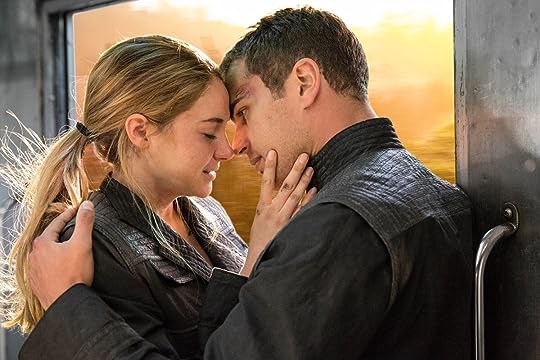 I'm sooo excited for this movie!!

Mod
Same I will probably retread it before the movie comes out.

I'm so angry that they changed the part when Four says 'Are you asking me to undress, Tris?' ...that was such an awesome Fourtris line :)

Mod
What!? That was an awesome line in the book.

I can't wait to see the movie! It looks promising from the trailer, I absolutely love the guy playing four. Theo James is perfection.

Mod
Yes he is.

Mod
I'm getting so excited!! I still can't believe that they pushed back the Four Four Stories :/

But at the same time Im excited that they are going to be long!! Like 80 pages!

THEO JAMES IS SO PERFECT. HE IS A GREEK GOD.

Mod
thoughts on the movie people?!

I Absolutely LOVED it!

Just saw the movie and despite some changes made - some scenes were cut and dialogues being changed - I think it was still awesome. Theo James was friggin' HOT!!!!!

I thought it was pretty good. Of course there were changes, because not everything adapts well from book-to-film and we'd get bored with 6 hour movie if they tried to include everything. It was casted so well, Shailene made an awesome Tris, and honestly...until seeing the movie...I didn't know I could be such a big fan of Eric. ;D Changes were there, but none of them really bothered me. They worked for the movie, and overall it was pretty faithful and none of the changes really deterred from the real story.

I could be biased though, because I don't nitpick, but also I tend to separate movies and books in my head for what they are and judge them on their own merit to give myself a bigger chance of enjoying both.

Red wrote: "I thought it was pretty good. Of course there were changes, because not everything adapts well from book-to-film and we'd get bored with 6 hour movie if they tried to include everything. It was c..."

Watched the movie a while ago and find it amazing. I agree it was faithful. The casts did an amazing job (just wished Peter could be more bad-ass) It didn't bothered me on the changes (I barely noticed it.)

I loved the movie so much one of the best adaptations

Red wrote: "I thought it was pretty good. Of course there were changes, because not everything adapts well from book-to-film and we'd get bored with 6 hour movie if they tried to include everything. It was c..."

I definitely agree!!!!! I was sad about a couple lines not being in it, but those are just personal favorites. I'm sure they had their reasons of not including it. They has so many awesome lines/scenes in it that I was just as happy!!!

Mod
Yeah, Peter was really downplayed. I thought he was a good actor, he just wasn't given the lines.

I didn't think I would want to watch this movie, but after reading this article: https://medium.com/p/1d20ea8b9064, perhaps I will give it a try.

Movie was incredible. Absolutely incredible. %80 of the dialogue was straight from the book.

I'm glad Divergent is getting so many good reviews. But I'm kinda bitter the movie version is better than Vampire Academy and the Mortal Instruments. >:( Gah, why is it only the dystopia/scifi YA books make better movies than the paranormal/fantasy?!

The Wide Web of Friends in YA Books