A Fire Upon the Deep discussion

142 views
A Fire Upon the Deep, discussion

I'm still at the beginning of this book [6%], and some things are not really clear to me. For example when speaking about realms, the beyond, the UnthinkingDepths, and solar systems that are below, it sound more like different realities, or a fantasy element then science-fiction. I expect all of that to become clear later on, but it is a bit confusing as I cannot imagine the type of universe described.

EDIT: The map that might not be in all ebook editions: 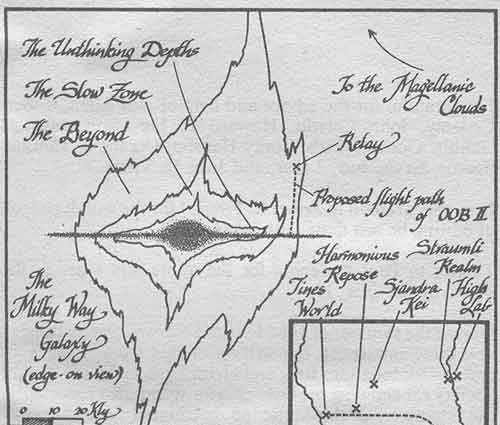 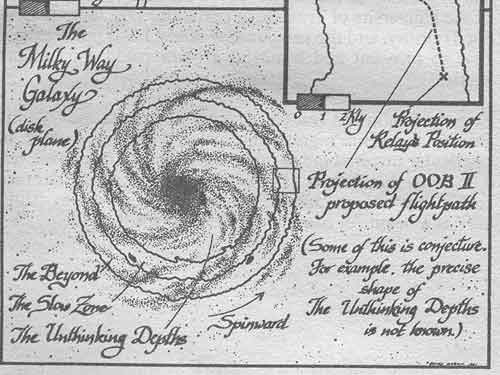 Same here. If I recall correctly, it only gets more clear about 2/3 into the book, when the different storylines come closer together.

All in all, that was probably one of the reasons I gave the book "only" 3 stars, probably I don't like it that much, if the setting is not explained well enough, so that one can make sense of what rules apply. The book gets better though, but I think its a mistake in the construction of the storyline.

I got more into about 12% in the book [I'm not sure if my kindle counts the annotations as well], and I find all the aliens fascinating. In another group I was explained about the gravity is changing to relation of the galaxy core, which lead to the different zones, which limits the speed if light/ships, which can affect the development of civilization.

I probably should give this a second chance, but the beginning confused the heck out of me the first time I tried to read it.

I hated this book. The characters weren't compelling enough to get me to read through page after page of the most astoundingly confusing drivel ever. If, within the first 25 pages, I can't figure out who the protagonist is, what is happening, and why he/she/it/they have to go verb something, forget it. I've really liked a lot of Vinge. This was not one of them.

You can think of it as each different realm as a different computer. The lower realms are old school IBMs from the eighties. They are slow and can only process so much. The higher realms are your top of the line modern computers.

I think vinge was going for states of consciences for each realm. I read it like that.

I thought A Deepness in the Sky was better; I found the events in A Fire Upon the Deep to be quite confusing.

The realms had subtly different laws of physics. In some, faster than light travel was possible, in some trans-human level AI was possible. I found this to be one of the less satisfying things in the book, especially as he used up his supply of handwavium with the resurrection of the main character.

Ellie [The Empress] wrote: "In another group I was explained about the gravity is changing to relation of the galaxy core,"

It did take a while to get into the story, but once you figured out what was happening with the "bad guy," I found it much easier going. I also really enjoyed the aliens, the packs. What a unique way of living!

I liked this book for the very imaginative aliens. They were all very fresh and different, especially the pack life forms.

What I got about the zones is that the laws of physics changed the farther one got from the center of the galaxy. This was not so much related to gravity but the ability to operate high level technology like anti gravity and hyper space jumps. This also applied to computers so the unthinking depths did not affect biological thinking so much as machine thinking.

The villain, if you will, was also pretty awesome and ruthless. I thought it was a pretty good book.

Hugh wrote: "The villain, if you will, was also pretty awesome and ruthless. I thought it was a pretty good book. "

I also enjoyed it and I am currently reading the second the book. I will have to read something outside this series from the same author.

Ellie [The Empress] wrote: "Hugh wrote: "The villain, if you will, was also pretty awesome and ruthless. I thought it was a pretty good book. "

I also enjoyed it and I am currently reading the second the book. I will have to..."

His Peace War was interesting. Give it a try.

Ed wrote: "Ellie [The Empress] wrote: "
His Peace War was interesting. Give it a try. "

That is one of the best ideas i have ever read of. Think about it: all what Vinge did was, he took the time scale and transform it into a distance scale: better computers are not 10 years in the future, they are 10 light years in that way.

You dont have any evolution or progess anymore, because any life or tecnologie can only get to a certain point, depending on were it is located in the galaxy.

Thanks, I'm trying to find a copy of "A Deepness in the Sky" but no luck so far. I will visit my favorite used book store this week.

I don't understand how the Tines are able to use/assemble complex tools. An individual Tine is a pack of multiple bodies, correct? How could a group of wolves build sophisticated structures and weaponry? I'm enjoying it so far but that just seems silly to me.

Have you ever watched a parrot use it's beak and tongue to manipulate objects? They can do amazing things. The concept is the same for the tines. Each mouth is like a three fingered hand and there is one for each pack member. Paws may also be used to hold things in place. With coordinated use by a single intelligent mind a lot might be accomplished. An animation of a pack doing a task would be interesting to watch and possibly pretty funny.

That makes sense but I would think it would still be exceedingly difficult for a Tine to do something like build a castle or manufacture clothing.

Will wrote: "That makes sense but I would think it would still be exceedingly difficult for a Tine to do something like build a castle or manufacture clothing."

With progressing in the novel it will become more clear. The talk between the members is like a though. It is not really a talk though it is called like that. The collective consciousness is a new person with new feelings and interpretations of events.

Within this new person each mouth is like a finger of a hand and that new person feels and controls each finger as easy as you and me. Probably it would look amusing for us, still it is as easy for them to manipulate tools as it is for me to type.


On the other hand I think there clothing and castles were pretty rude and basic, and art was very limited. Later in the book it is explained how packs are dismembered and put to labor when building a castle, both so that they don't question things and to be more controlled or disposed of. For some packs going to work is being separated and in a state of not having one owns identity.

Teresa wrote: "Ellie [The Empress] wrote: "In another group I was explained about the gravity is changing to relation of the galaxy core,"

That is how I took it to be when I read the book. The closer to the cen..."

Considering a galaxy's center is giant black hole. It seems that Vinge was attempting to describe what happens when objects get closer to the galaxy's center which contains most of the galactic mass, hence reflecting greater gravitational forces. As for the technology being held back the closer one gets to the galactic center? Yeah that one I had a hard time rapping my head around. The only thing I could come up with was that perhaps relative forces and an unknown interference was being given off by the black hole that made it more difficult for mass energy vs. dark energy(antimatter energy)to work as efficiently. Since Vinge doesn't really elaborate it does leave a pretty large hole, when attempting to understand his concept of the milky way galaxy. I like to compare it to fluid dynamics, the farther away you are from a vortex, the less energy it takes to propel motion.

As for the Tine? Yeah very confusing. I wasn't ever able to even imagine what these creatures might look like. By the described actions, I was under the impression that thier bodies were separate, but minds a collective, since they seemed to loose members so often.

It's certainly an interesting premise but I have a difficult time understanding how Tine civilization could develop. I suppose that's a testament to just how alien the creatures are and VV's strength at creating something original.

Will wrote: "It's certainly an interesting premise but I have a difficult time understanding how Tine civilization could develop. I suppose that's a testament to just how alien the creatures are and VV's streng..."

Oh, you mean evolution? That would certainly be an interesting to read. I haven't read the third book which goes back to continue the events of book 1. I wonder if there is any more information there.

In one way it seems the packs achieve almost immortality, since when you integrate a new member the change in personality is not a big one and memories would pass from a member to a member. Even if after a hundred years the pack is a new person, that person will have memories and knowledge coming from all the previous members.

A Fire Upon the Deep (other topics)