Mod
**Please Place Name and To-be Name in Bold. Like so.**


Your character HAS to be accepted before you can role play. If you role play with out acceptance from a MOD. You will be given a Strike.

You can only have 3 Characters per person.


Name: Lilystripe
Age: 62 moons
Gender: She-Cat
Rank: elder
Personality: Lilystripe is normally a charming nice cat. But if someone threatens her clan she will be very Feirce. To her clan she is very loyal,helpful,caring,and loving. Then to her family she loves them as much as Starclan. 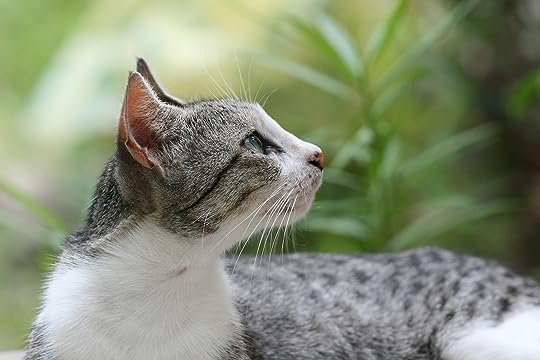 History: Lilystripe was born during a cooling lightning storm when the dam broke. The whole camp was flooded so Lilystripe mother had to get them all to safety. Luckily she did and they were safe. After the storm they were moved into a safer New nursery. In the nursery they grew to be big and strong. When they reached six moons Lilystripe was mentored by Nightclaw. She was given the best mentor in the whole clan. She grew to be a great cat because of her mentor. Sadly soon after she was given the name Lilystripe her mentor died in battle. She was heart broken. A Tom cat helped her with her sadness. They then bonded and started liking each other. Later she and her mate Tigarstripe had a kit together. They named the kit Icekit later to be named Iceblossom. Suddenly her mate died from green cough. She was sad once again. But this time no one came to help her. Moons passed and Lilystripe grew old and became a elder. Her daughter gave birth to a she-kit named Willowkit. She was happy but she knew her time was coming to die.

Mod
I like it. Very detailed background. Accepted. Please Place accepted on the top of your Charactersheet in bold. (:

Thanks. I am going to make Willowstar tommorw so don't let anyone make a leader please.

Mod
Please read rules and guidelines for an oath. (: Just want to make sure you read it.

Name: Cottenkit- Cottenpaw- Cottenpelt
Age: 36
Gender: She-cat
Rank: Warrior
Personality: Cottenpelt is shy and skippy. She doesn't like loud noises or the thunderpath. She loves to swim, and get her fur wet. Alone of course, she likes the world. She can't stand kits or small objects.
Appearance: [image error]
History: She can't remember much, nothing happened much during her apprenticeship to her Warrior ceremony, she does remember his dead sister Ravenkit who died of green-cough at 1 moon. Her brother is dead as well of battle and her mother died soon after giving birth to Ravenkit, Her and Lakekit. She tries not to remember them to much.
Kin:
Sisters- Ravenkit
Brothers- Lakeit
Mother-
Father-
Crush/Mate: None
Other Interesting Details: She likes fish.

Name: Spottedkit - Spottedpaw - Spottedflower
Age: 48 moons
Gender: She-Cat
Rank: Warrior
Personality: Spottedflower is a very brave and fierce warrior cat. In battle she is deadly, and she basically catches fresh-kill after fresh-kill on hunting patrols! Her flaws are definitely social skills. She will only talk to you if you talk to her first, and only her friends will ever really see the fun side of her. She is good at masking her emotions, but cats who know her well will always know what she's really feeling.
Appearance:

{{She does have ice blue eyes though)
History: Spottedflower had a fairly normal upbringing in the clan, along with her sisters Maplekit and Leafkit. When she became an apprentice though, she fought in her first battle against WindClan, on her first day of apprenticeship. Her sisters both died in that battle, and she only survived because her mentor was helping defend her. A moon or so after that, her mother and father got white-cough, and after three moons of that, both of them died, leaving Spottedpaw completely alone. She has now become very anti-social, only talking when she must, but her battle and hunting skills make up for her lack of socialness.
Kin:
Sisters- Leafkit & Maplekit (Deceased)
Brothers- N/A
Mother- Shadeheart (Deceased)
Father- Ottertooth (Deceased)
Crush/Mate: None yet
Other Interesting Details: If you want her to be your mate/crush, feel free to ask!

Mod
Accepted, Please put *Accepted* at the top of your Character sheet.

Name: Willowstar
Age: 26 moons
Gender: She-Cat
Rank: leader
Personality: Willowstar is normally a kind calm cat. She is loyal and fun to her clan but mysterious to those who like her. To her family she is happy ,kind,caring, and loving.

History: Born into a small family of four under a willow tree that gave shelter to willowstars mother while giving birth. Willowstars mother Was out hunting when she knew it was time. She gave birth nude that tree. When Willowkit s old enough she was given the name willowpaw and a mentor named ravenmist. Ravenmist was the best warrior and hunter in the clan at the time. And he was fun to! Time past and silliness was given th Name willowtail. Soon after she became a warrior she became dupety. She waited patiently to become leader for 7 moons. Then her leader died from a battle. She was very sad. But she was happy that she became the leader. Well that feeling became scary when she realised she didn't know how to lead a clan. Lucky for her she caught on with it quite quickly. She now just hopes she can find a mate.

Crush/Mate: No crush but ask if you want to be mate.

Other: Be free to ask to be her mate!

Elizabeth you have used your three cats. Unless you are made a MOD, you cannot post another character.

Name: Speckledkit-Speckledpaw-Speckledear
Age: 12 moons
Gender: male
Rank: Apprentice
Personality: Speckledpaw has a multi-personality rank. He can be Nice and sweet one minuet, and change drastically to mean and freakish. He loves to swim and hunt. Battling is one of his great interests.
Appearance: Speckledpaw
History: When Speckledpaw was little he became known as one of the most funniest kittens. He was greatly loved by his mother and other sibling Wildkit. But sadly during a fierce battle with Thunderclan, his brother was taken and now held hostage at Thunderclan camp.
Kin:
Sisters-
Brothers- Wildkit -Wildpaw- Wildstorm
Mother-Oakpelt (Diseased of old age.)
Father-
Crush/Mate: Open
Other Interesting Details: Doesn't remember having a brother. So he doesn't know that he's in Thunderclan Camp until later.

Name: Sunkit-Sunpaw-Sunpelt
Age: 38
Gender: She-cat
Rank: Medicine cat
Personality: Sunpelt is sweet and caring, much like her fellow warriors. She loves to heal her clanmates and enjoys kittens. She can never stay mad at a kit for to long.
Appearance: Sunpelt
History: She tries to leave her past behind her. So she can't really remember. She was an only kit, her other siblings died at birth. Leaving her to an one kit family. They were doing to name her one kit, but her pelt was to bright . They named her Sunkit. Hoping one day she'll be Sunstar!
Kin:
Sisters-
Brothers-
Mother-Softwing Open
Father-Yellowclaw Open
Crush/Mate:Doesn't need one
Other Interesting Details: Great with herbs.

Mod
Tiffany, Please finish before tomorrow. Or later tomorrow. This can be marked as spam. **

Somebody can have Wildpaw in Thunderclan. I have reached my limit.

Please add more to the history on the Character Sunpelt

Tiffany you have already created 3 characters. You can not create more. If we see that you are role-playing more than 3 characters, we are forced to give you a strike due to fairness. Thank you for your cooperation.

This seems to be the popular clan. I'll make an Apprentice, you seem low on those.

Name: Brindlekit - Brindlepaw- Brindlepelt
Age: 9 moons
Gender: Tom
Rank: Apprentice
Personality: Brindlepaw is the rambunctious type, always causing mischief. He's a wild and disobedient kitty with a reputations of breaking the code. He once left camp as a kit.
Appearance: History: He wasn't born into his clan, his mother had dropped him in the river, letting him almost drown. Luckly his life was saved by an elder who knew the ways of the river and got him to safety. He learned quickly of the warrior ways and was given his name Brindlekit by his adopted mother, Hollypelt. Hollypelt questioned his loyalty to the clan moons ago, only to be scratched by the elder for such non-sense. Brindlekit didn't like Hollypelt anymore, so he ventured out, leaving camp only suns away from becoming a Apprentice. But the elder found him, and asked Willowstar if he could become one sooner, saying he was ready. And he was REWARDED, Brindlekit became Brindlepaw, Hollypelt still questioning his loyalty.
Kin: Unknown.
Sisters-
Brothers-
Mother- **Hollypelt is open. She has only one eye though.**
Father-
Mentor: Cottenpelt? (:
Crush/Mate: None
Other Interesting Details: He's going to run away soon. idk yet, I'll have to ask Mod's if it's okay.

Mod
Escape The Fate wrote: "This seems to be the popular clan. I'll make an Apprentice, you seem low on those."

Ahh yes, Very good character. The History explains much of his personality. Kind of like Cloudpaw from warriors. Good touch.

Cottenpelt can be his mentor. And Yes, Approved, Simply amazing how you do these things. I love it!

Please add more to the history on the Character Sunpelt

Tiffany you have already created 3 characters. You can not create more. If we see that you are role-playing more th..."

Mod
Eh, Approved. But next time Detailed Histories, and Descriptions!