Name: Zaranie Elfleda Piękno
Goddess: Zaria
» Powers: She is able to protect people from death. She is able to manipulate things associated with beauty, such as clothing, hair, eyes...
Gender: Female
Actual Age: Between 1000 and 1500
» Appears: 24
Appearance: 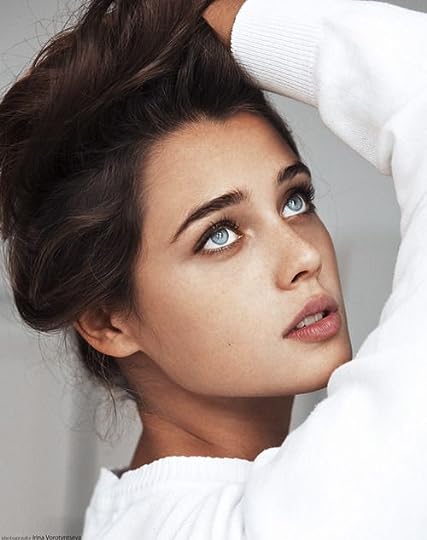 Description: Zaria is, as many say, "the image of a maiden pure, sublime, and honorable." She has skin of a roasted beige color, chestnut-brown hair, and eyes of a clear, pale blue-grey. Tall (at 6'3"), with slender curves, her beauty is alit from within, rivaling even the famous Aphrodite. She protects the warriors who invoke her, provided they act with bravery, courage, and honor. She is fierce, moral, and a strong voice for freedom from oppression. She likes structure and organization and has a deep love for the human race, particularly those of Slavic blood.
History: Zaria typically tends to be involved in humanitarian aspects of society, particularly those involving conflict, though she is sometimes involved with politics or fashion. In her last trip to Earth, under the alias of Elena Zolnerowich, she lived in Columbia and aided rebel leaders to victory over a tyrannical government. As little Slavic mythology was ever recorded, she does not have many clues to her past, though she has a pretty good guess, given her reputation. (She does take frequent trips to Earth to aid rebellions against governments who have done their people wrong.) On Eternal Earth, she protects the World Tree, an oak tree representing three levels of the universe: the sky (the realm of heavenly deities), the trunk (the realm of mortals), and the roots (the realm of the dead). Around the tree flows the River of Healing.
Combat: As a warrior goddess, Zaria is proficient with most weapons and styles of fighting, but particularly those more traditional to medieval times.
Other: Zaria is the goddess of beauty within the Polish pantheon, but she has strong associations with the morning. Her worshippers often refer to her as the "heavenly bride" (which is odd as she remains an unengaged virgin to this day) and they consider her to be the brightest maiden, pure, sublime, honorable." More on the World Tree: The world of dead in Slavic mythology was actually quite a lovely place, a green and wet world of grassy plains and eternal spring. In folklore, this land is sometimes referred to as Virey or Iriy.

I'm not sure I want to use this picture. Also, there is very little information available in Slavic mythology, which is getting very frustrating!

It means you can make it up! :D

Yeah, I just feel weird going off of so little information! It does give me lots of options though!

Yeah? I think I agree. I was leaning towards that one and the last one...

Oh the last one is definitely more pure looking LOL.

Well if it's going for purity then the last one :)

Whatever best fits this:

Yeah, the last one.

Thank you my dear ones!

Rivalling even Aphrodite, huh? It'll be interesting to see what she has to say about that... XD

;D I thought it might cause some fun drama. They are both goddesses of beauty, after all! Haha!