Are you a wine connoisseur? Share your tips and tales here... 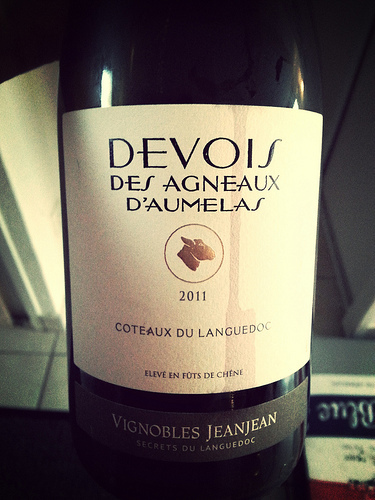 Got this bottle cheap from the local Casino supermarket just last week. So good!

Has anyone here traveled in the Jura region of the French Alps? Specifically, I'm curious about "vin jaune", which is an aged white wine that turns a golden yellow while maturing. Apparently it's a sweet wine that can be served with dessert and is reportedly a bit on the expensive side.


@Angela - I used to spend a few weeks painting each summer in the Languedoc area and enjoyed the wines very much. A lot cheaper than Bordeaux and Bourgogne wines, but quite drinkable, especially the rosé.

Mod
Sounds like vin jaune is a bit like Botrytis. I'd be keen to try that too.

Mod
Well - I'm a long way from being any kind of connoisseur, Jim, but I enjoy my wine - rather too much since being here!!

We live in Tarn et Garonne where the dominant grape is Malbec. These are full-bodied, no nonsense wines which I've come to love - but it took time, and even now I find they can sometimes be a bit too tanin-ey.

I scarcely dare say this on a French thread, but my tipple of choice is a Rioja. It's nearly impossible to get around here, apart from in Lidl occasionally, where they noticeably don't seem to hang around for long, so we toddle down to Spain (about a 3-4 hour drive) a couple of times a year to stock up.

Finally, our small local Inter-Marche does some pretty good offers. We recently picked up some very palatable Bordeaux - rrp €7 for €1.99 - WHAT a bargain that was, and Buzet - rrp €8+ for €3.40.

I don't know vin jaune, Jim, but will look our for it. Sounds as if it would work with the Christmas Pud - provided the budget'll stretch!!

Anybody familiar with a fortified red we get here called Fenelon? An excellent winter aperitif, which I think may be peculiar to the very local area. Also a fortified white wine called Pineau, similarly a great summer aperitif over ice.

Mod
I know what you mean about being embarrassed to say you like wines from elsewhere. Also, I agree with noting that French tannin flavour (or is it one of the refining agents?) that is so common here, which I can't say I like much.

Australian wines are quite different to French ones, but we love them (we're from Oz). The one in the photo above is more like an Aussie red, which made us very happy. I also found some of the South African chenin blancs tasted just like Aussie ones (dry, but fruity). Thankfully, no-one in France seems to like them, so I find them for a pittance in Aldi.

Mod
We were big fans of the New Zealand whites back in the UK, but haven't seen them here at all. I found the Australian and South African whites a bit too sweet for my palate so on the rare occasions we take white I've tended to stick with a French Vouvray or Sancerre. I drink quite a lot of rose in the summer - but you have to be quite careful with that - sometimes they're well sweet.

Moving on to the ailments element of this thread - what are your local specialities? Lots of prunes round here (from Agen of course!); walnuts. It's also a big summer fruit region - peaches, apricots, cherries, melons, nectarines - all of which are lovely. The Autumn fruits don't stack up so well against the English ones though - yet to find an apple or a plum that match a Cox's apple,or a Victoria plum. The biggest local delicacy, though, is duck. Foie gras, confit, a l'orange, you name it ....!! I enjoy the foie gras from time to time, but mostly I can take or leave duck other than in Asian food - and to be honest I think confit is an abomination - sorry!!

We've recently found a local fromagerie a la ferme - so we now get all our goats cheese and yoghurt there, and it's delish! I miss the English hard cheese, but a Comte vielle usually makes up for it along with the wonderful soft cheese. Recently discovered Mimolette, which I understand was Louis XVI's response to the importation of Dutch Edam! It's much tastier - try the vielle Mimolette if you haven't done so already.

I'm less sure about french cooking since I've lived here - they're very unadventurous, and variety (in the sense of food from different countries) simply doesn't exist - well not here anyway - but what I love is their attitude and commitment to food - sooooo different to the UK. I get the feeling that ready-meals / TV dinners don't have much of a place here - though no doubt that's a bit different in the big cities.

Sorry - long post! You will have gathered I'm a bit of a foodie!

Susan wrote: "We were big fans of the New Zealand whites back in the UK, but haven't seen them here at all. I found the Australian and South African whites a bit too sweet for my palate so on the rare occasions..."

Not much of a sweet wine drinker myself, except for Montbazillac (sp?) which goes well with fruit desserts.

BTW, there are also threads for recipes and restaurants in this folder. I had another amazing meal Friday evening and I really need to head over to that thread and brag about it....

Ah, the prunes are fabulous. Also the rest of the summer stone fruit.

Agreed that the French menu lacks a but in variety, but I think that's because they know exactly what they like and how they like it. It's all a bit too much meat for me normally.

Have you guys tried all of the violet produce that comes from Toulouse? Really interesting flavour, that.

Mod
Yes, the Montbazillac is good - in the summer I sometimes serve it as a mega-lazy dessert with biscotti for dipping! BTW still waiting for the restaurant review, Jim!

I'm about an hour from Agen, Angela - occasionally visit a very nice Moroccan restaurant there, the name of which entirely escapes me! I agree with you about the meat. I'm not a vegetarian, but I cook quite a lot of non-meat / fish dishes, just because they're nice. I'm not at all sure how vegetarians eat out in France at all - aside from omelette - and that wouldn't work for a vegan!

Fascinated to learn more about the violet produce - not familiar with it at all.

Mod
Ah yes, the Moroccan restaurant squirrelled away in the Jasmin quarter. So tasty. :) I love taking guests there.