Name: Charun Aranthur Sethre Zertnai
God: Ferryman of the Underworld
» Powers: Charun has control of the dead souls that he or Vanth have guided into the afterlife or ones that have "paid The Ferrymen" by having their eyes covered with two coins at the time of their death. Paying The Ferryman can also be done by having an obolus or danake placed in or on the mouth of a dead person. Charun can also shape shift to appear human in the mortal world by hiding his wings, dimming his eyes and retracting his talon-like claws into hands.
Gender: Male
Actual Age: Between 2400 to 2500
» Appears: 30
Appearance: 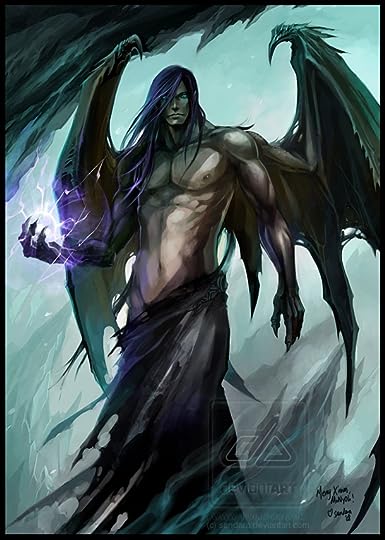 Description: The Etruscan Charun was fundamentally different from his Greek counterpart. Guarding the entry to the Underworld he is depicted with a hammer (his religious symbol) and is shown with pointed ears, snakes around his arms, and a blueish coloration symbolizing the decay of death. In some images he has enormous wings. He is also depicted as a large creature with snake-like hair, a vulture's hooked-nose, large tusks like a boar, heavy brow ridges, large lips, fiery eyes, pointed ears a black beard, enormous wings, discolored (pale cream, bluish or greyish) skin, and snakes around his arm. Not all of these depictions are accurate of course, but, like Vanth's sometimes misguided physical descriptions, Charun's varies depending on the artist. Charun is greedy, ambitious and possessive with a very large streak of sadism. His cruelty tends to manifest the most when it comes to Vanth. Try as he might, he cannot convince her to view the world the way he does: as a place to conquer, control and own—much like he's done with her. He is easily agitated and impatient; he is also extremely skilled at making deals that for some reason always benefit him much more so than the other person—even though this never appears to be the case at the time.
History: In Etruscan mythology, Charun (also spelled Charu, or Karun) acted as one of the psychopompoi of the underworld (not to be confused with the lord of the underworld, known to the Etruscans as Aita). He is often portrayed with Vanth, a winged goddess also associated with the underworld. Many stories feature the two purely Etruscan underworld demons, Vanth and Charu, whose job is not to punish the dead but rather to escort them to their final destination. However, there are at least two examples, on the sarcophagus of Laris Pulenas as well as a red figure stamnos from Orbetello, that do illustrate Charun in a menacing fashion. Each depicts Charun threatening a male figure with his hammer. The grotesque nature of the depiction of Charun appears to have been at least partly apotropaic in nature. Apotropaic art was the practice of the neighboring Greeks at this time, as represented by the exaggerated eyes painted on drinking vessels in the 6th century BC to ward away spirits while drinking or the monstrous depiction of Medusa whose image was said to turn men to stone. Through these images of the grotesque, violence and blood-letting, the Etruscans may have believed that they helped to fend off evil spirits from the tomb as well as sanctify the tomb perhaps in place of the actual ritual sacrifice of an animal usually performed in funerary rites. Born to ultimately serve and protect his sister, Charun had other plans. It would take over a hundred years for them to come into fruition, but when he did make his move, none saw it coming and Vanth quickly fell to her brother's power (she has been under his control ever since).
Combat: Having trained as a warrior first (in order to protect Vanth), Charun is particularly skilled in combat, the warhammer being his preferred weapon of choice.
Other: Although he will never admit to it, it bothers Charun that he cannot bring himself to kill Vanth since she is clearly a threat to his power. She could have spent the last two millennia plotting her revenge and his demise and yet, every time he convinces himself that destroying her would be in his best interests, he cannot follow through.

Powers—that needs to be full sentences.

Okay, look at what I wrote with Vanth?

Yup, and my questions will apply to Charun as well.

Okay, full name added. Let me know if there is anything else you'd like me to change.

I'm relinquishing this character to Heather who will be posting her own profile but can you please wait until she's made her own thread before deleting it?

Just because it would be more fun if someone else played him. :) She'll make whatever changes she wants to him but just in case she needs this thread as a reference, I'd like to leave it up for her if that's alright with you. :D