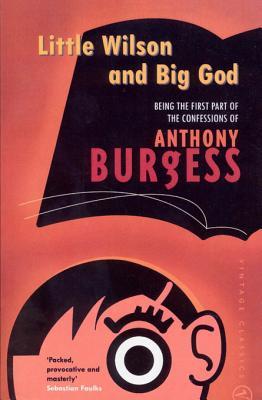 I plan to read it in December 2013 or January 2014. I'll add my thoughts once I'm underway and have something sensible to say. For now here's a bit more information and a few initial musings...

I've heard very good things about this book, and aside from Clockwork Orange, have yet to read anything else by Anthony Burgess. This part of his biography all happens ruing our era so it's a great book in terms of timing.

Little Wilson and Big God: The First Part of the Confession, volume I of Anthony Burgess's autobiography, was first published by Heinemann in 1986. It won the J. R. Ackerley Prize for Autobiography.

The work describes a period of over 40 years from Burgess’s birth, in 1917, to 1959, when his time as teacher and education officer in Malaya and Borneo came to an end.

The writer’s education at Xaverian College and at Manchester University, his war service at an army garrison in Gibraltar, and his service as a teacher at Banbury Grammar School (which he describes as one of the happiest periods of his life) are all covered in detail.

One of the most significant literary autobiographies in English of the latter part of the 20th century, the book has been described as resembling a picaresque novel in the vividness of its descriptions and its readability.

Roger Lewis opined that "It is perhaps Burgess's memoirs...which constitute his best novels, his masterpieces.

I am looking forward to reading this book and discussing it with a few of my fellow BYT'ers.

Nigeyb, this is great. I've started reading Little Wilson & Big God: and Sword of Honour. The library copy of Sword of Honour. Evelyn Waugh I borrowed is a Penguin Hardback edition, which I really like, so I've bought a hardback copy, it's on it's way.

Im looking forward to both discussions.

Greg wrote: "Nigeyb, this is great. I've started reading Little Wilson and Big God: The First Part of the Confession"

Excellent news Greg. You're a little ahead of me. I am not sure when I will get to it but it should be with a month or so.

Like you, I am looking forward to reading and discussing it.

Greg wrote: "...really starting to enjoy Little Wilson and Big God. Burgess, being a 'cradle Catholic', talks about convert catholics like Evelyn Waugh and Graham Greene. This is all very interesting.

"The converts can look back to a family history graced by the economic rewards of Protestantism and the advantages of education provided by a Protestant establishment. They converted in a cool time." , and a little further, " The converted Catholics of modern literature seem to be concerned with a different faith from the one I was nurtured in - naively romantic, pedantically scrupulous. Novels likeThe Heart of the Matter, The End of the Affair, Brideshead Revisited, and The Sword of Honour Trilogy falsify the faith by over-dramatising it. Waugh's fictional Catholicism is too snobbish to be true."

Wow! That's what Anthony Burgess thinks of converts! From what I'm reading, I think cradle Catholics have long memories. Burgess said "Until the Emancipation Act of 1829, no British Catholic was permitted higher education." One can understand some deep resentment there. No wonder old Guy Crouchback's father didn't acknowledge any monarch since James II.

Little Wilson and Big God is so good, positively bursting with interesting stuff, Burgess is a fabulous writer.

I agree Greg, that is very interesting. Like you, I am fascinated by the attraction of Catholicism for converts like Evelyn Waugh and Graham Greene. I am pleased to discover that Anthony Burgess turns his considerable intellect to this issue and look forward to reading his musings in full.

After finishing Sword of Honour, I concluded that part of the attraction for Evelyn Waugh is the continuity of tradition that he saw being so spectacularly eroded after the First World War, and which was finally destroyed by the Second World War.

Hurrah. I have started Little Wilson and Big God: The First Part of the Confession by Anthony Burgess.

I am about 30 pages in and finding it very interesting and agreeable. I was quite surprised to read about his tough and poor background. His birth mother died of Spanish Flu just after WW1 and, Burgess believed, his father always resented him for surviving. He's still young and has been bought up by two different women. He seems to have a remarkable memory for small but interesting details of his childhood.

So far, so enjoyable.


It had never occurred to me before that, prior to the advent of cheap alarm clocks, there was someone called a knocker-up who went around neighbourhoods tapping on bedroom windows, with a long pole if necessary.

I just came across The International Anthony Burgess Foundation. Some useful information on their website...

It had never occurred to me before that, prior to the advent of cheap alarm clocks, there was someone called a knocker-up who went around neighbourhoods tapping on bedroom windows, with a long pole if necessary. "

I had heard of the knockers-up, some factories employed them to get their workers in on time.

^ Here's the big question - how did the knocker-up know when to wake up?


Another one to rank with, how do the road grifters get to work?

During an art class at school Burgess discovers he is colour blind. The discovery of his colour blindness is greeted with ridicule and derision by both pupils and teacher. The teacher going so far as to hold up the picture, complete with orange grass, for everyone to laugh at.

Burgess grew up in the 1920s in Manchester, England - what unenlightened times they were eh?

This book really is terrific.

I'm up to page 75 now and Burgess is only ten, however he is painting an absorbing picture of pre-WW2 life for a kid in Manchester. A Manchester that is long gone but still very evocative and real.

There's some great stories in there too - early sexual exploits at the age of nine with teenage girls; ignoring his need for glasses (except at the cinema) which he did all through his life with predictably unexpected results; the eclipse of 1924; and seeing "Metropolis" by Fritz Lang in the cinema, at the age of ten.

He states that seeing Metropolis remained one of the major artistic experiences of his life and he continued to list Metropolis among the best dozen films ever made.

I dreamt about Burgess's school days last night such is the powerful mood of this autobiography. He can certainly tell a story!

Those BYT'ers who have read this month's non-fiction choice, The Age of Illusion: England in the Twenties and Thirties, 1919-1940, will have read all about the Rector of Stiffkey (pronounced Stoo-key by the by).

I've now read about 75% of "Little Wilson and Big God" by Anthony Burgess and encountered my fifth or sixth reference to "Sword Of Honour". Burgess generally mentions it to either reinforce or disprove a point made in "Sword Of Honour", all of which suggests to me that he saw this book as one of the definitive books about WW2.

I'd also add that I am thoroughly enjoying this book. I will write a proper review when I finish. However, for now, I'll just say it makes a very interesting counterpoint to some of the histories of the era that we have read recently. He remembers all kinds of interesting details about his childhood and life in early adulthood including serving in the army during WW2.

Curiously, and by contrast, Greg, who started the book a little while ago, has abandoned it. He may well pop by at some point to say more about that. I must admit I am surprised as I am completely engrossed by it.

Prior to reading this, the only other book I'd read by Anthony Burgess was "A Clockwork Orange". I was inspired to read this book, having come across a short extract, photocopied and framed on the wall of The Wheatsheaf pub in Rathbone Place, London. Anthony Burgess was once a customer and he was describing the era in the 1940s when both he and Julian Maclaren-Ross were regulars. As a great admirer of Julian Maclaren-Ross, it was a desire to read this particular section (probably only six or seven pages in total) that prompted me to read it. I should add that Burgess was gratifyingly complimentary about the work of Maclaren-Ross and brings that era beautifully to life.

"Little Wilson and Big God" is only the first part of a two part biography and covers the 42 years from Burgess’s birth, in 1917, to 1959, when his time as teacher and education officer in Malaya and Brunei came to an end and he decide to devote himself to writing full time (believing he only had a year to live).

Burgess was clearly very bright and something of a polymath. He taught himself languages and wrote classical music in addition to gaining scholarships and doing well at school. Despite this he was also something of a slacker as a young man, drifting through the war, and then into teaching in Malaya and Brunei. He and his wife had an open relationship from the off, and he appears to be very honest about his conduct which was frequently drunken and idiosyncratic. He has a trove of great memories.

I found the whole book engrossing as he vividly recreated the Manchester of his boyhood; life in the army during the war with all its attendant pettiness and absurdities; and his various eccentricities, and onto ever more outrageous behaviour as an observant if unorthodox expat during the fag end of British colonialism.

His writing style is flamboyant and sophisticated, and required a few stops to consult the dictionary, and I felt I was in the hands of a great writer at the top of his game.

I eagerly anticipate the second part "You've Had Your Time".

I have also bought "The Complete Enderby" too. This feels like the start of a beautiful relationship.

I was musing some more about this book whilst going about my business this morning....

Aside from The Road to Wigan Pier by George Orwell, and Love On The Dole by Walter Greenwood, I cannot recall any other books I've read that cover the north of England during our era. For this alone I think this book is well worth the time of anyone interested in our era. It also happens to be totally wonderful. 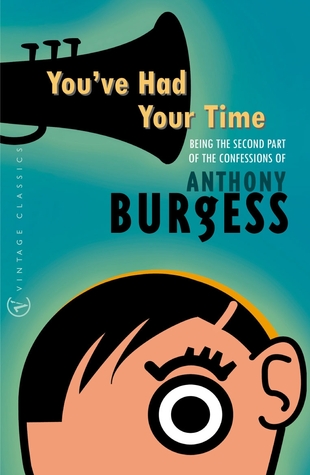 You've Had Your Time: Second Part of the Confessions

I hope to start reading it soon.

Little Wilson And Big God: Being The First Part Of The Confessions Of Anthony Burgess is probably my favourite book that I've read so far this year (early days I know).