Hello! What do you like/want to do?

Yep, I have a some plots

One is where a girl, who was raised by wolves(or some other forest animal), meets this guy. The girl can't talk and can't even walk upright. The guy begins to take an interest in her and soon helps her become human.

There's another one where a child(boy or girl) is left on the streets and a person finds them and takes care of them.

The last one is kind of long...
So a company takes children and raises them to be slaves. They call the children 'pets' though. The children are taken because they have powers so they must be put under control. No one knows about these 'pets' because the company keeps them a secret. Outsiders also don't know about what the company truly does. Most don't know that it exists. The 'pets' are given to 'owners' who also may or may not have powers. The reason the 'owners' with powers aren't 'pet's is because they are wealthy. That is another feature with the 'pets'. They are poor or do not have a lot of money so not many people notice if they are taken away. I can play a guy 'pet' who is in training but can already be owned. He is not owned yet so he is constantly locked up in his house and do not know much about the outside world. At one point, he manages to escape the hell hole but bumps into a regular girl who has no involvement with the company. Her background isn't great though. (she can have abusive parents or something. she can have powers). The story goes on from the chance encounter and the two trying to fight against the forces that try to pull them apart.

One based off of a Doctor Who episode, you don't have to have seen it before...
Anyway, so this girl or guy has been this test subject, being injected with diseases, never seen sunlight, never talked, never even touched another person and his or her purpose isn't even clear. Then a person comes along and saves him or her and cures them of their disease... and yea :)

One in a war like setting and a guy falls for this girl. He tries to ask her out, get to know her, but everything he tries fails because the girl doesn't want him to get hurt if torture comes up. One day when they're spying or something they both get captured. The enemy figures they are a couple and tortures the guy, she can't watch and the guy thinks that she hates him. Then after a while, the enemy tortures her instead and yea.... (I haven't figured it out...)

This is placed in medieval times and it's supernatural.
So there is this menace in a village who runs the entire town and anyone who tries to go against he kills. He's basically a demon who doesn't care for anything except of that what he wants. But a girl comes along, she can be an angel, human, what have you, and she actually confronts him/gets a crush on him/wants revenge on him. And the rest I'm hoping to figure out.

Yep, again, I can go first if you want 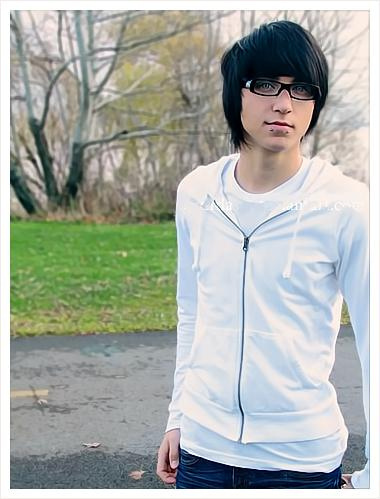 Personality: Dillon is kind and clever, he can be a bit of a scientist at times. But in the long run he is sweet and kind. He's loyal and chooses to stick with someone until he can't.
He's also patient, really patient... He will wait forever, as long as he needs to get something done. He's also kind of quiet and mysterious, but he doesn't notice it much.
History: Dillon was born into a family with a father who wanted to be the best. He forced his son to learn science and math at the age of five and tried to make him a math prodigy. Even though Dillon is nothing close to one.
He was picked on at school because he was so smart and taking math with the fifth graders when he was in third grade. He was always alone and barely had any close friends.
In middle school, he was taking algebra, pre-calculus, and trigonometry in that order by grade.
He's taking online college, since he doesn't want to go to an actual college and his dad visits him time to time to see how he is doing.
Strengths: Math, some science.
Weaknesses: Getting a friend
Likes: Alone time, music
Dislikes: Math... he doesn't like it
Other: His father is a real jerk and will do anything to get money or even a mention in a newspaper.

Dillon was actually camping that night, bundled in a jacket and sitting by a fire. He was drawing the stars at the moment, smiling as he did so. He drew diagrams and other such even though it had already been done.

Dillon came back to reality when he heard a bark. He glanced over at a girl and raised an eyebrow. He put down his journal and carefully walked over to her. "Hello?" He asked hesitantly.

Dillon frowned and went over to his tent. He grabbed a hoodie then walked back to her. He raised his hands up with the hoodie still in his hands to show that he was nothing harmful. He carefully knelt down to her size to give her the hoodie.

Dillon watched her, frowning. He sighed and grabbed her hand gently. He led her inside his tent and made her sleep in his sleeping bag. He looked around for his solar powered space heater until finding it and turning it on for her. He was planning to bring her back at his place to get her properly cleaned up. Then seeing if she could communicate with him.

Dillon smiled a bit at her. He zipped up the sleeping bag and waved goodnight. He then turned the heater on a low setting and walked out after zipping the tent up. He went back to looking at the stars, smiling and drawing them like they were works of art.

Dillon had packed up and got her into clothes. Then started to walk her to his house slowly, holding both of his hands for support.

He sighed a little and grabbed her hands. Dillon pulled her up and held onto her arms gently. He then started to walk backwards towards his house.

He frowned and stroked her hair gently to try to tell her that everything was okay. He stroked his thumb along her forearm, he didn't want her scared because of his house.

(( not really if he knows that he won't get a response ))

He tried to show her that it was okay. "Listen, there's nothing to worry about in here." He pulled her into a small hug before pulling away again.

He pulled away and got some food, seeing how skinny she was. He made some meat and gave her some chips that he had.

Dillon smiled and gave her the chips, making something else.

He raised an eyebrow and went to her. "What's wrong?"

He pulled out a first aid kit. Then walked over and cleaned the wound. "This may hurt..." He wiped the cut with an antiseptic wipe.

Dillon went wide eyed and frowned. "No, no!" He gently wrapped the wound after a while.

Dillon blushed and hugged her close.

He blushed a little more.

Dillon looked at her and smiled. "Hello," he said softly. He gave her some breakfast. "Go and sit, I'll come sit too."

Dillon looked at her and tilted his head. "What's wrong?" He asked softly. Then he went to sit by her. Then started eating.

Dillon stopped eating and grabbed the book. "Oh... I guess you're right," he said. "After breakfast I'll teach you."

Dillon nodded and smiled. "That's a wolf," he said. He pointed to the surroundings. "That's snow."

He nodded. Then pointed to her. "Human. You are human," he said softly, holding her hand.

Dillon tilted his head. He frowned and wiped the tear away. "It's okay, it's natural."

Dillon held her close and rubbed her back. He tried to get her to relax.

Dillon nodded and started to teach her more.

Dillon smiled and stood up. He hugged her and kissed her cheek. "Hey, Emily," he said, looking at Ally. "Should we continue?"

Dillon frowned a bit at Ally. "We were just learning, I don't think she likes you..."

"I don't know," he said softly. He walked after her.

Dillon walked over to her room, going by her.

Dillon frowned and hugged her. "Come on Ally..."

Dillon sighed. "But I don't want you to get hurt because of it..."

Dillon waved, then looked at Ally. "Then what is it?"

He hugged her. "How did you learn that?"

He nodded and sighed. "I don't want to say I'm cheating," he whispered.

Dillon sighed. "Some people wouldn't want who they love to love another person," he whispered.

Dillon frowned and ran a hand through his hair.

Dillon stood up. "I'm not leaving," he said.

"I want you to think that I like you and that I will care for you..."

"You aren't dumb, you're learning. there's a difference."