note: This topic has been closed to new comments.
18 views
Characters > Profile


Name: Kalli Ira Excidio
Goddess: Kali the Destroyer
» Powers: Kali has the power to destroy time. She also has control of the element earth. She is equated to a formless void full of potential.
Gender: Female
Actual Age: Between 1000 and 2000
» Appears: 26
Appearance: 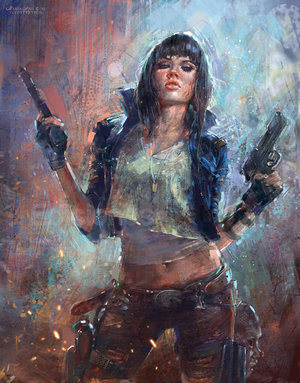 Description: Kalli has black hair cut above her shoulders with fringe cut straight across her forehead. She is pale, with eyes of such dark grey they are nearly back. She has lovely curves and is quite tall, around 5'10" or 5'11". She is always packing, and only she ever knows the exact amount of weapons she carries on her person. Kalli is ferocious and determined. She is quick to anger, naturally, and her wrath is something to fear. Her reputation usually proceeds her, though little seems to follow her but for destruction. She cares little for the lives of others, particularly those of humans, as they are but flashes in her eye—there one moment and gone the next. She is witty and sarcastic, with her own, confusing set of morals no one else could ever hope to understand.
History: Kalli is indeed Kali the Destroyer, a goddess in Hinduism. Despite her supposed origins in battle, she evolved to a full-fledged symbol of Mother Nature in her creative, nurturing and devouring aspects. As Kalli can't remember how she came to be, or much of her history, she frequently reads human lore and examines their religion so as to humor herself and also to see if it would bring back any memories. So far, it hasn't. While the Hindus may call her Kali, and that may have once been her name, she knows and thinks of herself to be Kalli. In the more recent years, she has served as a mercenary, a job highly applicable to her skill-set.
Combat: Kalli loves handguns, but she is also a deadly hand-to-hand fighter. Over the years she has had time to master many weapons and styles of fighting, and even if she can't remember learning certain things, the muscle memory remains.
Other: A common thought is that she destroys only to recreate, and what she destroys is sin, ignorance and decay. That is true, but it is only a part of the whole.

A few rules of thumb and other useful things to know:

Though I will answer questions, I will make fun of you if you ask me what to do. The following is a pretty thorough explanation.

• Each character gets their own topic in the Characters folder. The title of the topic would be the characters name. For the above example, the topic name would be Kalli Ira Excidio. You make the topic, not me.

• Use correct spelling and good grammar. Grammar: This (—) is a dash, not this (--) or this (-). Yes, I am picky. THE ONLY EXCEPTION: Each section should be comprised of only one paragraph, even if, grammatically, it should be split into more than one.

• Use the html/formatting I've provided. Don't italicize the little double arrow symbols (use them though), and make sure they are followed by a space. Copy and paste, and delete the periods from the html in the given profile and we'll be golden.

• Do not use spoilers.

• If you want to emphasize something, which you might normally bold or italicize, please underline instead, as the section headings are bolded and italicized.

• DO NOT make a forever long profile. If it takes up more than one post, it is too long.

• There are two blank lines between NAME and Name. Those are the only blank lines that should be in your profile.

• Powers: I want complete sentences here. You do not need to include immortality or omnilinguism, traits they all have.

• For Gender, capitalize Male or Female, or whatever else you may end up having.

• For Appears (the subsection of Age), be sensible. They have more or less the mentality of the age they appear. Remember, they are gods. Many have powers that affect the world on a global scale. You wouldn't want children or teenagers with that sort of power. (That being said, I do envision some cases where a much younger age may be applicable/appropriate.) Appearance is not limited by the location of origin of the deity.

• For Appearance, no links or spoilers. One picture only, and no famous faces. Embed this. If you don't use a picture (which I would prefer you do), delete this line.

• Description is for both personality and appearance.

• History: Keep in mind that their memory has faded over the years. Most can only remember a few hundred years back or so. They don't have their own written history, unless they've kept diaries. That being said, those diaries would have only started once the humans developed a written language and once they realized they couldn't remember certain things. These beings have a planet "Earth" of their own, where most of them live, but they occasionally do a dimension cross-over to remind the humans of their power. Humans cannot cross over to the Eternal Earth, including demigods. (Having children with humans is highly discouraged.) Time doesn't pass the same way on the Eternal Earth as it does on Earth; a few days on the Eternal Earth may be a few years or more on Earth. The time crossover often doesn't work linearly, either.

• For Combat, please stay true to the character. A pacifist goddess of plants, per say, probably wouldn't know much about fighting, especially compared to a god of war.

• Do not leave Other (or any other section) blank.