Name: Regina Silvia Fancourt
Gender: Female
Blood: Pure Blood
Age: 17
» Birthday: September 18
Position: Student
House: Ravenclaw
» Year: 7
» Quidditch: N/A
» Position: Student
Wand:
» Wood: Pear: The golden-toned wood of pear produces wands of splendid magical powers, which give of their best in the hands of the warm-hearted, the generous and the wise.
» Core: Unicorn Hair: Unicorn hair generally produces the most consistent magic, and is least subject to fluctuations and blockages. They are the most faithful of all wands, and usually remain strongly attached to their first owner, irrespective of whether he or she was an accomplished witch or wizard.
» Length: 12 1/4 inches
» Flexibility: Slightly Springy
» Description: Regina's wand is light gold in color. The handle thins as you travel to the tip, making for a perfect fit for the hand. It is decorated by various spheres and smooth curves. Etched in the wood are various constellations and runes.
According to Ollivander,longer wands tend to be drawn to bigger personalities whereas shorter wands suit people whose character lacks something. This bit of information pleased Regina very much when her wand chose her. It took Regina and Mr. Ollivander about seven attempts before getting this wand in her hands. The second Regina wrapped her fingers around it, stars, constellations, and galaxies were projected around them, twinkling and constantly changing.
It didn't take long for Regina and her wand to become comfortable with each other. Because of the wood and core combination, Regina was able to cast spells and charms easily, some that were even a level or two above her. Regina and her wand have come to the point where she no longer needs to speak the spell in order for it to be cast. There is an unspoken bond between Regina and her wand.
Appearance: 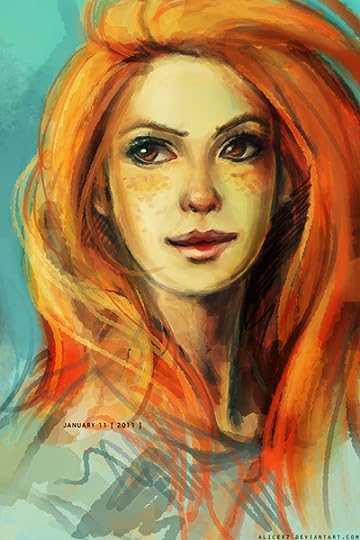 » Description: Perpetua, or Petty, as Regina often refers to her, is an old, lovable feline. She appears to be larger than she actually is because of her many layers of striped fur. Regina rescued Perpetua from being left on the streets by the owners of Magical Menagerie. No one had been interested in buying her for months and they no longer wished to provide for her. Regina took the old girl in and the two bonded instantly. Because of Perpetua's laid back behavior, she made the perfect companion for midnight reading.
When at Hogwarts, Petty spends most of her time lounging either in the common room by the fire, or curled up on Regina's bed. It's rare to see her out and about on the grounds for she is more of a team motivator then mascot. Whenever someone enters the Ravenclaw common room she is there to great them with a friendly meow.
Petty gets her name from Regina's ancestor, Perpetua Fancourt.
Other: Her patronus is a wolf

Just let me know when she's done and we'll be more than happy to take a look at her! I really like her picture, by the way!

Will do and thanks!!! XD

Oh, I've seen that pic on deviantART! It's of Ginny Weasley, right?

Is it? It's quite awesome.

Really?! I just went to google and typed "viria profiles" to see what would pop up! haha!

I think it looks different enough that it works. Any objections, speak now or forever hold your peace.

Would you like me to look at her, hon'?

Not yet. I still need to write her personality. I'll let you guys know when I'm done. :)

Don't worry! I've been thinking about it a lot lately!

Haha, okay! Let me know when you're done, please!

Finished! What do you think?

She looks pretty good! There are a few formatting things though.


For starters, REGINA should not be bolded, and there should be one more line between that and Name. (So two total.)

Alright! Minor stuff that I can quickly fix! :)

Relations: Not everything should be italicized. (See the Profile.)

Gender: Female rather than "F".

Pictures should be on the same line as Appearance. (Following the colon after a space.)

Read my little notes in the original profile? I think that will help clear lots of this up.

I will change it eventually... I'm using the app to check notifications and stuff b/c I'm really not supposed to be on GR anymore.... I'll change it after school tomorrow, promise!

Sure thing, don't worry about it doll.