Yay! Btw. This is my first 1x1, but I promise I'm active and will be detailed (:

soooo...do you want to start?

Woah! You weren't kidding when you said you had ideas! Haha! I like the 2nd option. (:

Are you sure? You could always pick. You said sappy romance right? lol

Ofcourse not. Never been the guy before, so I'll try my best

Hmm...depends, but I feel like for advanced it should be a bit more detailed. Not necessarily paragraphs though. 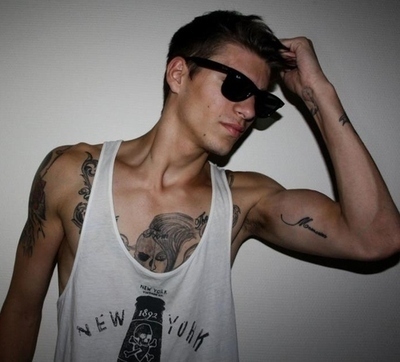 Eye color: Blue
Hair color: Brown
Weight: 168lbs
Height: 5'9" 1/2
Family:
Angela Hetherson (Mother)
Christine Hetherson (Younger Sister - Age 15)
Personality: There's one main thing you need to understand about Derek. He hasn't always been the way he is today. Derek comes across as the drinker, smoker and bad boy persona, and that is what he honestly is. With a beer bottle in his hand, he's found smoking with his close friend Anthony on the bleachers of the football field. He's had a rough past and it only seems to be piling up day by day. All of the alcohol and cigarettes give him an escape and a chance to be worry-free of all things society. He lives up to his bad boy persona with his every day antics that even include sleeping with any girl (that is up to his standards) that offers themselves to him. He tries not to do it, but if people want to see him be the "bad boy" then who is he to decline the challenge.
History: To everyone's surprise, Derek used to be the sweetest kid on the block. He had the perfect American family with a younger sister and two loving parents. He played football and had the cheerleader girlfriend waiting for him on the sidelines. It all went downhill when his girlfriend was in a car accident and died when they were 16. He was driving that night and blames himself for not seeing the tractor trailer speed through the red light. To top it off, his dad left his family to be with his secretary across the continental US. Derek, his mother and sister had to move. He left his perfect life behind and turned to alcohol and smoking. They were an escape to ease all of the pain that he was inflicted. He's his sister's protector and his mother's rock. He is essentially the man of the house and only acts out when he isn't home. In school, Derek realized that the people didn't care about him the least bit, so he made one friend and stuck with that. Sometimes, the occasional acquaintance at a party or hookup under the bleachers. All in all, Derek is tired of people with the perfect life and their perfect families. He's satisfied with just that and doesn't have the patience for another girl in his life.

I edited it.
She died and he was driving.

Can you please? I have to finish up making my friend's X-Mas present really quickly. How do you want to start off the RP?

She could be dropping off something to the football coach from one of the teachers and she's all disgusted by the idea of sports and to top it off, Derek bumps into her by the bleachers.

Sorry for such a late response btw. i just made a birds nest necklace for my best friend and im pretty much in love with it lol

alright so start it off :D

Derek puffed a cloud of smoke as he lit his cigarette, realizing Anthony wouldn't hang out today. The smoke breathed in through his lungs. In goes the cancer, out goes the worries. He chuckled at himself. He stepped out from under the bleachers, bumping into a dark haired girl, dropping his cigarette. "Well damn." He said looking down at the rolled up tobacco. Shrugging, he stepped on it and looked up at the girl. "Sorry about that." She didn't look familiar.

Derek cocked one of his eyebrows at her statement. Oh jeez. Not a prep. His eyes quickly scanned over her, appreciating her attractive body. "I think the entire faculty and staff of this school has given up on reminding me. I suggest you do too. Don't want a pretty girl like you to waste your breath." He said and reached into his back pocket to grab another cigarette, but quickly remembering it was Anthony's day to buy the packs.

He chuckled a little and watched her go. "Whatever you say hun." Derek turned back around to the parking lot to go towards his car while shaking his head at what just happened.

Derek started his car, his Chevy Impala '65 revving to life. He found a cigarette in his glove compartment and began to light it. He squinted his eyes and flicked the cigarette out the window. He ran a hand through his hair and drove off home.

((Do you want to fast forward or where should the almost attack occur?))

Derek got back into his car and drove off to the grocery store after his mother ran out of eggs for tonight's dinner. He decided to take the long way, for a smoother drive, passing through the town's shops.

Derek turned on his car lights as he noticed the sun go down and the air chill. He played one of his old tapes, listening to music as he drove slowly on the back roads.

Derek parked his car in the parking lot and got out of his car, deciding to walk to the supermarket as he couldn't previously find a parking space.

Derek snapped his head to the left when he heard strange noises coming off of a side street. Curiously, he began to walk in the direction of the noises. His hand grazed his pocket knife in his back pocket that he always had just in case of situations like these.

Derek's eyes went wide as he realized what was going on. He ran towards the girl in distress. "Hey!" He called out. "You heard her! Don't touch her." He was a couple of feet from the guys bigger than him. He took out his knife, but kept it behind him as he crept closer.

Derek got a quick glance at the girl, glancing again to see if his vision wasn't failing him. He gave her a quick smile before adverting his focus back on the situation at hand. He got face to face with the guy tugging on the girl's shirt. It made him disgusted. He pushed the guy back, forcefully. "Didn't your mother ever teach you manners? Now I'm telling you to back off."

He was starting to get really aggravated with this guy. "My mother taught me to treat a lady with respect." He got closer to the man. "Now, I suggest you apologize to this lovely lady."

Derek groaned angrily and shoved the guy against the brick wall of the building, pinning the knife to his throat a little closer to the girl than he had intended. "I said, apologize." He stared directly into the man's eyes.

"Now I suggest you leave." Derek let go of the man and backed up slowly, his heart pounding in his chest.

Derek breathed heavily and put away his knife. He quickly looked back at the girl. "I'm sorry about that. Are you okay?" He stepped closer to her to see if she was hurt.

Derek stepped closer to her. "I'm sorry. I didn't mean to frighten you. Are you sure you're okay?" He asked, genuinely worried for her. "He shouldn't have treated you that way."

Derek quickly nodded his head. "Yeah. Yes. O-ofcourse." He walked slowly beside her in the direction of his car. His evening stroll to the grocery store was not what he had expected and at that moment, eggs were the least of his worries. He reminded himself to simply pick up a pizza on the way home.

"Derek." He caught her eye and gave her a small smile. "Sienna. That's a lovely name." He cleared his throat and looked down at the concrete sidewalk. "So, Sienna, why the evening stroll?"

"So either studying or pleasure reading." He stated. "I'm assuming you go to the high school here. "How come I never see you around?"

"Oooh. So. Let me guess. Only child. Straight A student....and you don't seem like the type to be in a club, so it must be something after school?" He guessed, while reaching closer to the parking lot as they turned the corner.

"Your type. I'm assuming you're the perfect daughter who rarely gets in trouble. Also the type that wouldn't be caught dead talking to me." He shrugged. "I get it."

He put his head even lower and dropped his gaze. "I understand. My apologies, but when was the last time you even stayed out past curfew? Went to a party? Even experienced that dungeon they call high school?"

"Going there doesn't exactly mean being a part of it. Don't you ever want to just, I don't know, be free? For even just a little amount of time?" Derek shrugged.

He walked over to the passenger side of his car, opening the door for Sienna. "Come on. Let's get you home." Derek said.

Derek waited a second too long by her door. He couldn't figure her out and tried to set aside the feeling that he had. He had the feeling that he genuinely wanted to get to know her. Get over it. She's a prep. He walked over to his door, got in, buckled his seatbelt and put the key in the ignition, the engine roaring to life.

"Fixed her up myself." He said while grinning to himself. "Thank you." Derek looked over at her. "So, where to?"

"So," he cleared his throat, "tell me more about yourself." Derek made a left down the main road.

Derek quickly glanced over at her with a smirk on his face. "Okay, well." He pondered for a bit. "What do you like to do on your free time?"

"Really?" He asked, making another turn. "What kinds of movies do you like?"

He nodded his head a bit. "Oh cool. I have a thing for horror movies myself." Derek stated.

"Music. Definitely." He shrugged. "None of that mainstream stuff though. The radio has a tendency to annoy me."

"More on the alternative side, but yeah," Derek said, smiling over at her, "I guess you could say that."

"Who knew. A guy on the other side of the tracks and a girl like you have something in common." He chuckled at his own humor.

Shifting his vision back to the road, he said, "Well I'm glad we did."

He made another turn and pulled up to a house he believed only existed in movies. Derek had to remind himself of her riches. "Well," he cleared his throat, "I believe we're here." With a small shrug, he smiled at her, avoiding looking at the huge house.

"Yea ofcourse. It's no problem. I'm glad you're okay." He said quietly. "Have a good night. Sleep tight." Derek gave her a small smile.