I've gotten a few new cookbooks lately, and this is the one I've used most. Most slow cooker recipes I've tried make so much that I end up eating the leftovers all week. I just got a smaller slow cooker along with this book, and it has been wonderful! The recipes make just the right amount for my husband and me (and even our 3-year-old, if he's willing to try it), often with enough left for lunch the next day. I also recommend checking out the author's website (healthyslowcooking.com) and trying the slow cooker oatmeal recipes. I've tried a few of them, and they've all turned out great (especially the Slow Cooker Pumpkin Coffeecake Oatmeal). It's so nice to wake up to a warm breakfast in the morning.

Here are the recipes I've tried so far.

Wake Up to Bananas Foster for Breakfast: I would describe it more as a bread pudding than Bananas Foster, but it was delicious nonetheless and makes a good weekend breakfast. I used bourbon instead of rum.

Chocolate Pumpkin Brownie Breakfast Quinoa: This is the one recipe I was disappointed in. It seemed like I had to add a lot of agave nectar for it to taste OK. But it might just be me, as I often don't like quinoa dishes.

Tamarind Tempeh: A nice combination of flavors (it includes winter squash, tomatoes, and lots of Indian spices), and it went well with brown rice. This was hearty so made 4 servings.

Hearty Lasagna Layered With Nut Ricotta: This was my favorite dish so far -- no surprise, since one of my other favorite lasagna recipes is the Pumpkin and White Bean Lasagna in Kathy Hester's previous slow cooker book. I like the simplicity of being able to put it together without precooking the noodles. It takes a little more time than most slow cooker recipes, since you have to make the ricotta. I used crumbled steamed tempeh for the sausage, and I used the whole package instead of just the cup the recipe called for, and it turned out fine. We ended up with enough lasagna for two nights.

Bean and Oat Veggie Chili Over Baked Sweet Potato: This was one of my other favorites, because it combined so many healthy ingredients -- sweet potatoes, pinto beans, oats, greens and other veggies -- and tasted great. I also liked that the dry beans and sweet potato could be cooked along with everything else. The sweet potato sinks into the chili ingredients at first, and then rises up to the top as the chili thickens. 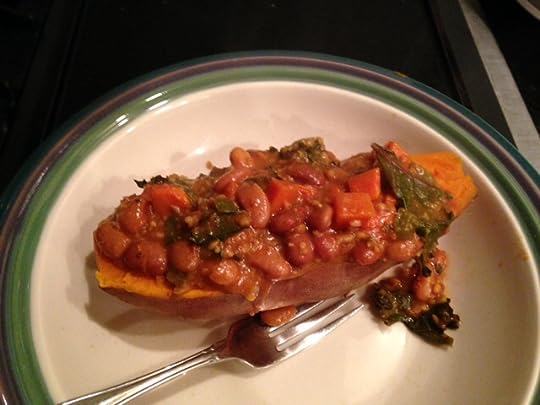 Small Batch of Basic Brownies: This is the first time I've baked in the slow cooker. They taste healthier and less sweet than the standard brownie (as the author intended), but were still good. I added the suggested walnuts. 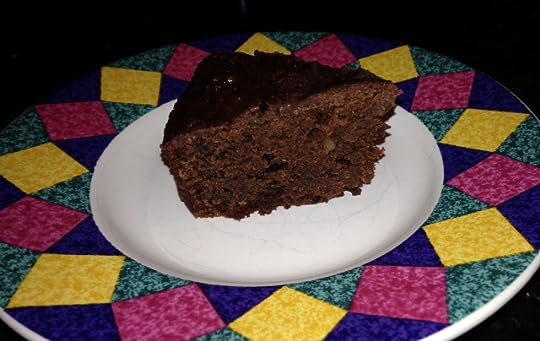 Thank you so much, Emily. I'm definitely interested in this book, even more so now.

I just checked this out of the library and purchased a $12 2-qt slow cooker at Target today...I currently have Pumpkin Coconut Caramel Sauce cooking in the kitchen. (I know, I know - not the healthiest thing in the book!) I have been making a lot of iced coffee this summer, and this sauce is supposed to be great in it. Will let you know! Wrote down 12 other recipes to try with a bunch of CSA veggies we have in the fridge.

I usually love leftovers, but get very tired of the amount of food made in a standard crockpot for two people - I am excited to try smaller portions.

Let me know if you have any questions about the recipes.

The Pumpkin Coconut Caramel Sauce is delicious! I think with my new slow cooker, however, it will need even less than 7 hours to cook. How long will this last in the fridge?

Yesterday we had the Roasted Seitan and Vegetables, which was awesome. I would probably add more herbs next time - and there will be a next time. This reminds me of crock pot stew of my meat-eating days - warm and comforting and would be perfect for fall and winter! Loved all those veggies. I made it with seitan because I had some left over, but it would also be great with beans, as the author suggests.

Tomorrow we will be having the Sloppy Black Eyed Peas.

I really like this cookbook a lot. I LOVE that there is no prep on the stove top and that there are no oils in the recipes. It has gotten me really excited about slow cooker dinners once again - the time factor and health factor of this cookbook are wins! I think I am going to ask for a copy for my birthday!

The Sloppy Black-Eyed Peas were good, and a nice twist on the sloppy joe, but it was very bland.

We had the Potato Cauliflower Curry tonight, which was also bland, even though I upped the seasoning amounts some. My husband wasn't too into this dish - we served it over brown rice.

I am still enjoying this cookbook, but will tweak the recipes we continue to sample. I am not one who needs tons of seasoning, but the main dishes we have tried so far seem to really be lacking.