Stratford Dale's contract to write children's books isn't what he thought it would be. Charmed by Stratford, Vinne tries to change that. 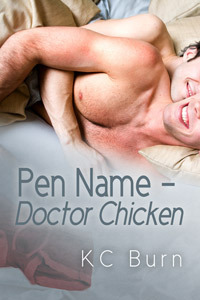 Sometimes Stratford Dale feels like Doctor Chicken consumes his life. It’s his pen name for a series of wildly popular children’s books. They were his brainchild; he meant for them to be a way to pay his many bills while he pursued his dream of publishing graphic novels. But the Doctor Chicken contract was a raw deal. Instead, he churns out book after book for a pittance, leaving him broke and no closer to his dreams.

Stratford’s dreams of love have fared no better, but he’s still trying. After yet another disastrous date, he’s intrigued by a man going into a cooking class—so he takes the class too. Vinnie Giani is a successful, self-made man who is charmed by Stratford’s bow ties, sharp humor, and clumsiness—which leads to an opportunity to take Stratford in for stitches. Vinnie is, above all, responsible, having taken on the care of his mother and sisters from a young age. Perhaps it’s natural when he begins to treat Stratford more as a child who needs a parent than as an equal partner. But when Vinnie tries to “fix” Stratford’s career woes—including the Doctor Chicken problem—and ends up making the situation worse, their fledgling relationship may not withstand the the strain created by blame and lies.

This was such a cute story, I really liked it. :)