The Gospel According to Cher by S.A. Garcia

Hindy has been unlucky in love when Cupid leads him to a drag queen named Patrice. He falls for Patrice, but challenges arise. 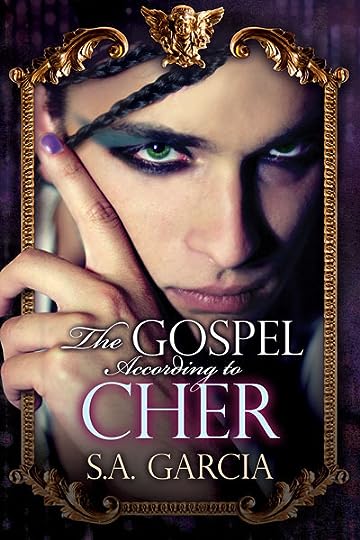 Hindy Nardella, gallery owner and tidy leather diva, isn’t sure about love anymore. His most-recent ex-lover said “sayonara” and headed for Japan despite a week of Hindy begging him to stay. The man before that bid Hindy “namaste” before heading for Nepal seeking salvation. Hindy will accept advice from anywhere, even a tacky Cupid music box which only plays Cher's "Believe," and vivid dreams that compel him to leave NYC and head for the Adirondacks.

Cupid leads Hindy straight to a leather bar in the mountains and an exotic drag queen named Patrice O'Malley. For Patrice, who’s near-perfect beauty belies his lack of confidence, it's lust at first sight, but Hindy has doubts born of his recent run of bad luck in romance. But when Patrice saves Hindy from death by a falling chunk of airplane blue ice, Cupid slams into Hindy's heart, and Hindy begins to believe in miracles again. Dangers and challenges arise, involving, among other things, crazy ex-lovers, rampaging mosquitoes, and a phantom moose. But life together awaits back in NYC, if they can survive, trust in each other, and believe in life after love.

The best characters are always irritating at first. They usually grow on the reader... hopefully in a good way, not like skin fungus.

"The Gospel According to Cher" received 4 Pants Off from Pants Off Reviews!