After his lover dumps him, Ross's best friend takes him to a club for drinks. There, he meets a Japanese man who makes him wobbly. 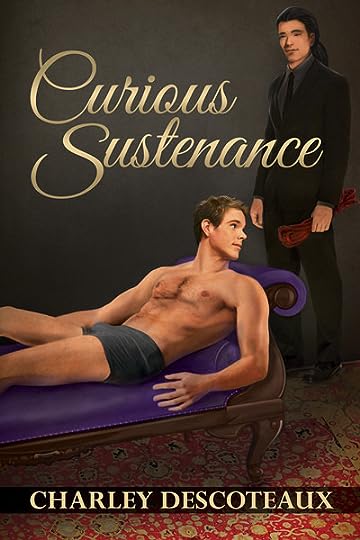 Ross Jenson is looking forward to a little midmorning delight to celebrate making Lifetime in Weight Watchers, but after he spent eight months losing ninety-eight pounds, what his lover gets him is a triple-layer chocolate cake. When Ross refuses to eat it, the newly minted ex leaves the country and dumps him via e-mail, with three sentences and a link to a chubby chasers web site. A few days later, Ross’s best friend and workout buddy takes him to her favorite club for drinks. Ross is shocked when he realizes it’s a sex club but warms to the idea in record time when a mysterious Japanese man and his silken ropes sweep him off his feet. Ross has never thought of himself as adventurous, but he can’t stop thinking about the man who makes his bones feel like gummy worms.

To see the review, a quickie-interview, and enter to win a copy, visit the blog: http://mrsconditreadsbooks.com/index....

Busy day! I'm also visiting at Guys Like Romance Too! and talking a little about the setting, Portland, Oregon, and how it's like a small town.
http://guyslikeromancetoo.blogspot.co...

Today I'm taking over the Dreamspinner blog with a release party! All day I'll be sharing excerpts and giving away prizes--and they're all internationl!
http://dreamspinnerpress.com/blog/201...

Today I'm at Joyfully Jay's talking about one of her favorite subjects--cover art! Tell me what you look for in a cover for a chance to win a copy of Curious Sustenance!

I visited Sid Love's blog with the story behind my unusual title. There's still time to comment & enter the giveaway!

Today I'm visiting ARe Cafe, with a giveaway and a short & sweet post about something sweet for Valentine's Day! Hope to see you there!