so FxF or MxM?

We could to a MxM detective case...

okay here is my character:

Powers: He is a wizard. In turn he can put curses on people. It depends on who the person and what their history is. He can take some of them away, but sometimes he can not cure them. Meaning that this is bad luck for who ever meets him. After spending sometime, even a second around him, he can cast the curses, but sometimes they don't allow him to control them. 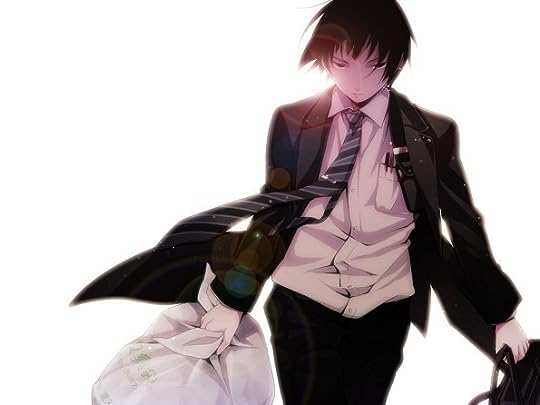 If the picture does not show up-

okay you want to start?

okay you want to make him.

thanks, should we role play now?


Nakato stood at the corner of Main street and Eastevergreen. He waited until he spotted a boy walking up Main street.


Jason had just gotten a voice mail that told him to meet some guy at the corner of Main street and Eastevergreen. He looked up and saw a man standing at the corner.

Jason stopped when he arrived.


The man looked at him, "I see you have gotten my message." He gave a small signal to his men to get him from behind.

Jason nodded, "Yeah, so is there something you wanted to tell me?" He could not see this guy's face because of some hat. He soon took the note from the man and watched him disappear behind the corner.


The man handed him a note. "Take this to your boss." He stepped behind the corner and then disappeared.

Jason looked down at the note in his hands, but then realized that if he looked at it, he would probably be in trouble. He put it in his back pocket of his pants and started walking back to the office.

Jason walked slowly back to the office, not wanting to know what the note said.

((sorry, I have sooo many roleplays going on..))

Jason opened the door and walked to Shinichi, "Shinichi, I was asked to give this to you." He handed him the note.

((you can decided what was on it))

Jason looked at him, but sat down on the couch.

Jason nodded and ate some cookies and drank the water.

"Jason sir." He told Mr. Shinichi. " I got this email asking me to meet this guy at the corner of some two streets and he told me to give this to you."

Jason gulped, "Well, he did not tell me what his name was."

Jason could not think. He kept staring at the detective.

Jason stared at the floor, "No, and I couldn't see the guy."

"He was in the shadows." Jason told him.

He nodded, "Yeah, he had a very old, but strong voice." Jason told him.

Jason nodded as he imitated the voice. He coughed and took a sip of some water. It was hard imitating voices.

Jason nodded and took a sip of water.

Jason looked at him.

Jason took the note cautiously; he started to read it. "But why read it?"

Jason nodded, "Sure. I will hire you."

"I told you that I am going to hire you," He handed the note back.

"No, I trust you." he told the detective.


Jason thanked him and walked out of the room.