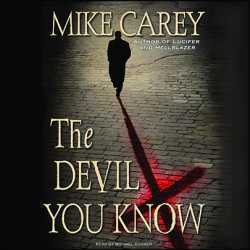 Felix Castor is a freelance exorcist, and London is his stamping ground. It may seem like a good ghostbuster can charge what he likes and enjoy a hell of a lifestyle--but there's a risk: Sooner or later he's going to take on a spirit that's too strong for him. While trying to back out of this ill-conceived career, Castor accepts a seemingly simple ghost-hunting case at a museum in the shadowy heart of London--just to pay the bills, you understand. But what should have been a perfectly straightforward exorcism is rapidly turning into the Who Can Kill Castor First Show, with demons and ghosts all keen to claim the big prize. That's OK: Castor knows how to deal with the dead. It's the living who piss him off...

Mike Carey is a fantastic writer, wether it is his comics or his novels. I thoroughly enjoyed this book and its sequel. Felix Castor is a wonderful character and is surrounded by a great supporting cast. If you like Harry Dresden or the Nightside books give this one a try.

I always like characters with "character" and Felix has that in spades. I read these as fast as they make it across the ocean and recommend the entire series to all my friends who like noir; especially mystery fans who ordinarily wouldn't read fantasy at all have told me they are very pleased with the books. Its fun to watch them say how much they liked it without admitting they might like fantasy. The action in each of the sequels keeps raising the stakes and I wonder how Felix is going to save the world or if he is even going to survive. The story is dark and the characters are well developed with great motives for what they do even when it goes against their own survival instincts. I like the little glimpses of London that are seen and the tweaks that Carey gives to it are so in line with the story, you almost expect that to be the real London. Everyone's motives are suspect but with so few friends on his side, sometimes the devil is the best friend he has. I am eagerly awaiting the next one to see where it goes. A movie would be awesome if they didn't make it cheesy - no Tom Cruise or Keanu Reves! I'd rank these right up there with Daniel O'Malley's The Rook, another quirky alternate London and Daniel Polansky's Low Town, not London but still dark and gritty (sequel coming out soon on this one).

I first read this one a few years back and I thought it was going to suck so imagine my surprise when it did not.

The one thing that annoyed me was the over use of metaphors geez.