So, shall we create out characters? 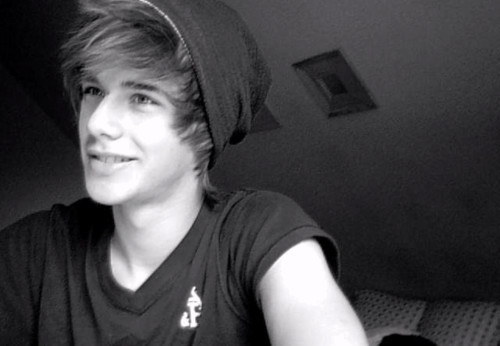 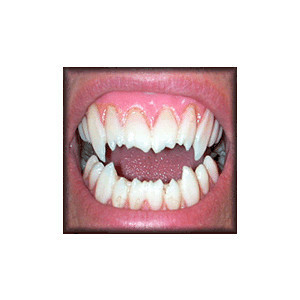 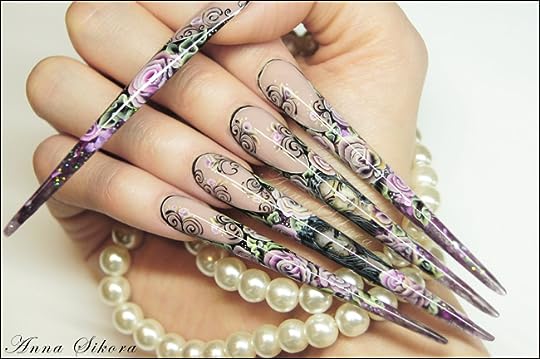 They look like this at full length, just without all the designs. 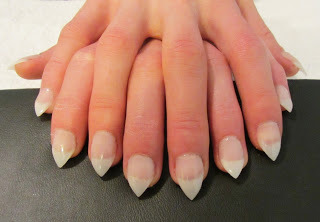 It usually is like this after a few days. He has to cut them to normal length most mornings."/> (hide spoiler)]

Personality: Jay is very quiet, for reasons that really no one understands, only two people know why. He is very witty and fun to talk to, if you can get him to talk. Most of the time if he does, he will not be facing you, looking at you, or he'll have his hand over his mouth, blocking his teeth.

Though you wouldn't guess it if you're close to him, he's very self cautious and never really feels right. He can be very nervous at times. And sometimes messes with his hands as a nervous habit.

Basic History: It's a hard life being different from everyone else, looking different too. They eat normal things, look normal and he's just.... there. The fiction book out of all the history books. And that's what he is, fiction, or that's what he's supposed to be. He isn't supposed to exist, heck, there isn't even mythical creatures like him. He's a cannibal. That isn't what he always eats, but it is his favorite. He knows it's sickening, he does.

He has had to move around so much in his life, even though he was home schooled all until he turned 16, high school. This is his first time ever being in public school. He needed a chance to get out in the real world, and his parents thought this would be better for him. He hasn't had much experience actually talking, gaming and online things sure, but never talking face to face.

Other: He doesn't really think he will ever be able to get any friends and if he does, he doesn't think he'll let them get close to him, scared he might hurt him. They only eat the dead, they don't kill anyone. That's not what they do. They ARE human. They just look different, a different stage in evolution.


Personality: Caitlin used to be really quiet until her last year before high school, when one of the elder boys threw a stone at two Italian girls on the bus, and called them ‘wogs’. She stood up, threw his bag out the window, called him an ‘ignorant piece of trash’ and added as she left, that he smelt like bear shit. She got four days suspension, and an appointment with the school counsellor, but ever since then, she has been, well, quite opinionated, and one of the smartest (or loudest) in all her classes. She has a soft spot for people who tell actually funny jokes, as long as they’re not over used.

History:
Caitlin grew up with her Mum and her two younger brothers. Her parents split up when she was about 9, and after 3 years, her Mum died in a car accident. Now, they live with their Dad, in a new town. She’s lived here for 4 years.
She has one best friend, Lena, who tends to hang out in the library when she’s not away from school because she’s ‘sick’. By default, Caitlin sits in the library too, therefore making her English teacher like her a lot because she’s read most of the books in there. Her favourite subject is English – mainly because the teacher likes her, and lets her do what ever she likes.

Relationship Status: Single
Crush: None, but we all know where this is going!

Other: In her spare time (though she'll never admit it), she cooks. A lot. And she’s quite good.

Ah. Alright. And thanks. I've been dying to use this picture and I guess it just worked for my cannibal boy!

Caitlin walked to school with her hood up. Lena was meant to be walking too, but she would be late. She always was. By the school gates, she dodged the umbrella totting try-hards, and ran to her Science class. The rain was falling faster, and she knew, just KNEW that her Science teacher would them to do an outside experiment. It was bound to happen, these things always did.

would *make* them do an outside experiment

Jay didn't pay attention to the rain as it fell into his head, soaking his beanie and his hair. They would both dry. He really didn't know how he was supposed to react to it. His parents didn't explain weather to him and how to act in it. He but his lip softly, not hard, he didn't want to brink his own blood. That was something that didn't sound good to him. He looks around again, seeing people with umbrellas, thinking maybe he should have brought his own, but he didn't know if they even owned umbrellas at his house. He would have to do without, and he didn't mind that.

Outside Science, people were lining up waiting for the classroom to be unlocked. Her lab partner - Roberto - came to stand beside her and starting giving her the run down of his weekend. Roberto had always a habit of sharing too much information. She zoned out when three greats aunts who got into a fight became involved. His family was complicated, and she was not up to figuring it out in the morning. Someone bumped into her, which then caused her to bump into Roberto, which he took as an invitation to expand on who these great aunts were, and she glared at the clumsy culprit. It was his fault that she now knew what those three aunt’s names were, and exactly what their children had done.

((Yeah, it can be Jay. I figured they needed to meet somehow, even if it was briefly))

Jay looks up when he bumped into a girl, his heart skipped a beat as he looks up at her. He looks down, his mouth hopefully hidden behind his hair, "Sorry." He mutters averting his eyes away from her and to the side. Perfect first impression, those were supposed to be the most important. Guess he messed that one up. He made a new rule for himself, Always look up when walking.

Caitlin looked at him, and gave in. "Oh alright, I forgive you" Roberto looked at her strangely "No, I'm not talking to you! Can you go tell someone else about Aunt Katia?!" She turned away before he could say anything. He was bearable as a lab partner, good at the things she was bad at, but that was it. He left, to go corner someone else, and she breathed in a sigh of relied. The other boy was still there, eyes on the ground, half hidden beneath his hair

Jay listened to what she was saying to the other guy, he nodded after she had said she forgave him. By the tone she gave the other boy, he could tell he often talked about un important things or something that didn't matter or was hardly understandable to her. He didn't question anything, he didn't know what to say or do, he dared look up, to see what his surroundings were.

He looked up at her, and she tried not to stare. Why were new boys always so irrevocably handsome? In fact, why did all boys that she meet, have to be so hot? Couldn't she for once have a pimply nervous one, who she was not attracted to at all? Because this one was hot. And he looked shy. "What's your name?" She couldn't just keep calling him 'this one' in her head.

Her eyes felt like hot plates on his skin, he looked down at his hands discreetly, making sure his claws didn't grow back, they never grew back that fast. When he seen they were normal he clenched his jaw, making sure that his mouth was closed, his lips hiding the spikes. They were. His mind was full of confusion, she then asked his name. His heart sped up more, he felt like he needed to run, but he didn't. He started playing with his jaw, covering his mouth, making it look like it was just a nervous habit, his parents taught him how to socialize a bit, "Jay." He answers softly, his hand over his mouth, well, not over it, just hiding it, it was perfectly audible.