Okay. Do you prefer MxF, MxM or FxF?

I prefer Mxf though I have done mxm before

Okay, we can do a MxF since you prefer that.

Can I be the girl.

Sure. Do you prefer supernatural or realistic?

I can do both but I do like supernatural more.

Girl A is apart of a werewolf pack, one that doesn't completely hate vampires. She is a nice person, but can be shy at times. She is very helpful though and , like all werewolves, can be very territorial. Guy A is a vampire that has a very strict and mean father, and a lot of times he gets into trouble for his father actions. One day while he was hunting, a group of vampires attacked him. Luckily, Girl A was also hunting and saved him before the vampires killed him. he was thankful for her and they figure out that they go to the same college. They begin to hang out a lot, keeping it a secret from Guy A's family and Girl A's pack of course. They start to get even closer and kiss one night, deciding to go out. They would normally wash off before going back to their own homes, but Guy A forgot to and he came home smelling of werewolf, while causes his father to question him. Guy A tells what happens and his father tells him that he can't see the girl anymore, sending a few vampires to kill her. Guy A gets there before she gets too hurt and they decide to run away and start a new life together.

Okay cool. You want to be the girl right? 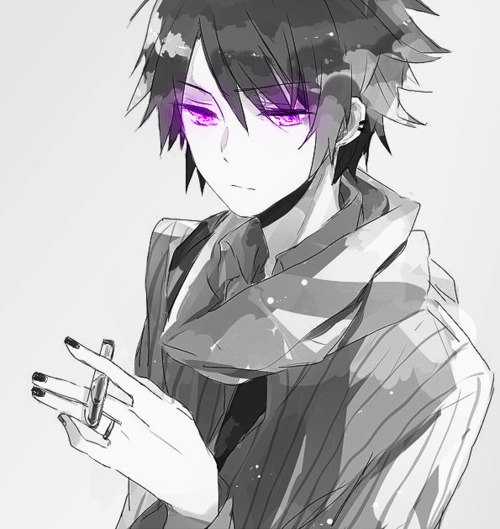 Xavian has jet black hair, some part of his hair a blue/purple sort of color, and purple eyes. He stands at 5'10 and weighs 130 lbs.

Where do we start?

Probably when they both go out hunting and Xavian gets attacked.

Can you go first?

Sure. 1st person or 3rd person?

Naw, either works for me (: Which ever you want.

Xavian left his house, still being albe to hear his father yelling inside. He was having an argument with someone over the phone again....That was the main reason Xavian left in the first place. It was irritating after a while to hear yelling about something random. He decided this would be a good time to go hunting, so he headed into nearby woods, the nice fall breeze going against his skin, cooling him down.

Nova was out on her first true hunt alone. She chewed out her dad for being over protective of her, she even scared off the guard following her. She smiles as she ran through the woods, the wind in her fur and the thunder of her paws on the ground. For her, this day couldn't get any better.

Finally, when he got deep enough into the woods, Xavian closed his eyes and took a deep breath, letting it out slowly and opening his eyes, with were now a bright red. The night was his favorite time and he loved being outside.

Nova howls happily as she smelt out two deer just for her. She smiles and goes for it, taking one down before getting the other. She ate her dinner quickly and left the scraps to the foxes who followed her. She gets up, shaking out her fur before heading to the river to clean off.

Xavian leaned against the tree and smiled softly up at the sky, deciding not to hunt right away. He rarely ever got to go out and just enjoy outside, because of his father. So, this was actually rare for him, which was surprising actually.

Nova shifts back to her human form and got undressed. She walks into the river to clean off the blood and relax. She could never do that with the guards around, she knew they'd peek at her.

Xavian stood there for quite a while, just taking everything in before he began to walk again. His hunter senses were working now and he searched. His father would prefer if he took from humans, but he never liked that. He always took from animals.

She changes into her clothes and shifts into her wolf. She love the feel of her fur in the wind. Its what relaxes her the most. She starts to run just for the fun of it.