Mod
I love pocket-sized horror paperbacks, and collect them zealously.

The first edition of Screamscapes required the larger 6x9 format to ensure distribution across retailers like Barnes & Noble and Books-A-Million, but I couldn't wait to make it available in the format I love the most.

I imagine there are a few others who share my fondness for a smaller-size book to take on the go, so it is with great pleasure that I announce the upcoming release of the pocket paperback edition of Screamscapes . 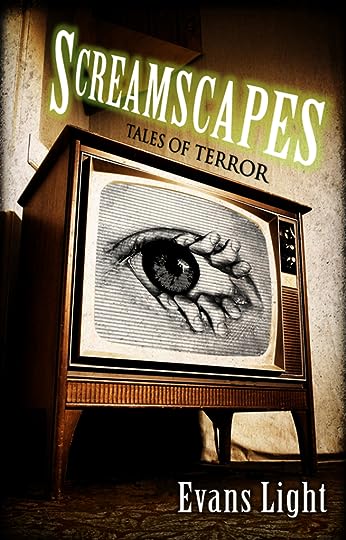 The cover art was inspired by what was likely the initial source of my desire to write weird tales of horror. When I was about eight years old and the closest thing I had read to a horror novel was THE VELVETEEN RABBIT (or possibly THE GIVING TREE, I still have nightmares about that one!), my dad and I used to sneak into the den around midnight on Saturday nights to tune in to black & white reruns of THE TWILIGHT ZONE.

He had seen most of them when he was growing up, and laying there on the floor with me in front of the old console television he, too, would turn back into a kid. We'd fiddle with the rabbit-ear antenna until we picked up the signal from the local UHF station, which would sometimes fade in and out during the broadcast, interspersing the show with static-filled cryptic messages, possibly from the great beyond.

For my dad, rewatching the shows with me was great fun. For me - especially after I was tucked in bed and cowering wide-eyed as the lights in the house went out one by one - they were slightly more terrifying.

Watching those shows while my young mind was growing sleepy caused them to blend into my nightmares and settle into the dark corners of my psyche.

I loved being scared to death by those shows, and this cover reminds me of the good times my dad and I spent scaring the pants off me as a kid.

Look for it later this month, September 2013, at fine retailers everywhere.

Oooo love these nifty little books for on the go. Very cool. Also, talking about awesome covers, remember the days when they had hologram and cut out covers? Those were the coolest. Hautala was really big with the hologram covers, Cold Whisper was one of my favs. Even with the addition of ebooks, I think some of these cool things should make a come back :o)

Mod
Thanks, Dustin.
Steven, that is one cool cover on Rick's book. I'm surprised ebooks haven't taken advantage of technology to make covers cooler... At least have slowly morphing animation on them, you know? Or an assortment of alternate covers that the reader can select their favorite from.

Totally, with ebooks and Kindle Fire and HD it's amazing they haven't tried something like that or heck can you image 3D for the Kindle. Covers that pop out at you or heck even some comic books. I actually still have a 3D G.I.Joe comic from back in the day. It was published through BlackThorn which was in between Marvel and Image cause they had the printers to make them.

Evans wrote: "Thanks, Dustin.
Steven, that is one cool cover on Rick's book. I'm surprised ebooks haven't taken advantage of technology to make covers cooler... At least have slowly morphing animation on them, ..."

You are very welcome! Anytime.:)