Girl A has just turned 18 and is moving out of the foster care unit, thankfully being provided a apartment for the time being until she can get a job and everything to take care of herself. So, she moves in, but the aprtment is really run down and sort of dirty, not much space either. But, it wasn't like she was expecing something too nice, considering they didn't have enough to pay for a nice, big place. She didn't mind though, needing to deal with crap all her life. Girl B is the first person that she meets, a sort of myserious sort of girl, but she's nice enough and Girl A is happy to have a sort of aquantans already. Strange things start happening though. Girl A begins to hear things and see things that aren't really there, children wandering around the hallways, but when she follows them, she comes to a dead ni in the hallway. confused, she keeps it to herself, not wantnig everyone to think that she was crazy. Truth is, when she was 5 she had a near death experience, having a car accident that killed her parents, as well as her. She was brought back however, and have heard things before, but they were never like this. Now, she's seeing the ghosts of small children running around her new apartment and she can't explain why. And to make thnigs even more strange, whenever she interacts with Girl B, the ghosts yell at her to get away from her and that she's dangerous. But she doesn't understand why...

Okay. I already have my character made, so you want me to put her? (:

Yeah. I still have to make mine 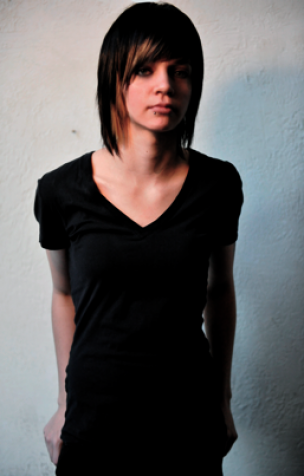 Willow hair black hair, with blonde tips at her bangs, and very light blue eyes, appearing grey at times. She stands at 5'6 and weighs 110 lbs, underweight. Her breasts are rather small, barley visible when she's wearing baggy shirts, and her waist and belly are very small. Her hips and bum are a bit small as well, but that never bothered her.

Personality: It's hard to describe her personality as nothing but..strange.

Other: Willow always wears black or grey clothing, normally seen with a hood on as well zipped up and hood up.

Take your time, it's alright lol

She's cool. I like her. And ok, I probably will lol

Yes, she is xD

I really like her body type too. She could totally pass of as a dude and I like that for some reason haha

Yeah. I find that interesting, so I kinda like it, too. Lol

Appearance: I'll post a pic of what she looks like when I get a computer, but I can tell you about her for now. She has short blonde hair with a black shadow and rainbow streaks in her bangs. She a little on the pale side, but not too pale. Her eyes are a greyish color. Her breasts are rather large, a DD cup. She is skinny, but not underweight.

History: She was born to teenage parents. They took care of her to the best of their abilities, although her mom didn't pay as much attention. When she was five, her dad was driving her to her first day of kindergarten when a drunk driver hit them. Her dad was killed and she almost died, being put into a coma. When she woke up, she couldn't remember anything that happened and her mom never told her. Her mom started ignoring her and focused on drugs and alcohol. On her 6th birthday, her mom stood on a street corner and sold her to a random person for drug money. The guy she got sold to promptly gave her to foster care. For years of her life, she was jumping between different foster homes because after someone adopted her, they decided they didn't want her anymore.

Other: She loves rainbow things, so she tends to wear rainbow colors. That's also why her hair is partially rainbow

Yay! Me too. Sorry, there's still no picture...I didn't get to a computer

Sorry, didn't see this. Um, so are we ready to rp?

Holly was just dropped off at her new apartment. She was so excited! She hugged Joyce, her foster care lady, and went inside. She sighed when she got inside. It was run down, yes, but it was her first permanate home. Of course she was happy! She walked around before dropping her bags in the living room area.

Willow was sitting at her kitchen table, playing with a purple marble. She flicked it to the other side of the table, then made it come back before flicking it back again and repeating this. She was bored, there was nothing interesting at all around her recently.

Holly wondered through the aprtment, looking around. With a little bit of work, this place could be awesome. She picked up her bags and moved them to her bedroom. She smiled as she looked around more.

After a while, Willow got bored of that as well and sent the marble flying across the room, over near the corner. She stood up and went to the fridge, getting a bottle of water out and taking a sip.

She walked into a bathroom and looked in the mirror. Her short hair was messy, not that she was surprised, and she had bags under her eyes. She hadn't been sleeping well lately. She sighed and decided that she would go introduce herself to her neighbors.

Willow closed the fridge with her foot and went to the couch, sitting down and playing with her necklace, twirling it in between her fingers.

Holly pulled on a pair of sneakers and went to the next apartment. She knocked on Willow's door and looked down. She was wearing a baggy t-shirt and sweatpants. Well, she wasn't dressed up, but she was comfortable.

Willow glanced over at the door when it was knocked on, waiting for a moment. When she realized that it was a live person who knocked, she got up and went to the door, opening it.

When the door opened, Holly smiled brightly at Willow. "Hi. I'm Holly and I'm kinda new here. I just wanted to drop by and introduce myself."

Willow looked at the girl for a couple o moments before she looked her up and down, quickly at first, but then slowly. Finally, she looked back at her face and smiled softly, slowly outstretching her hand.
" I'm Willow," she said.

Holly stood there awkwardly as Willow looked her up and down. Holly smiled back at Willow. She took her hand. "Hi Willow. Nice to meet you."

Willow shook her hand slowly, keeping a hold of it for a moment longer then necessary before taking her hand away and returning it to her side.

Holly dropped her hand to her side when Willow let go of it. "How long have you been living here?"

" About 7 years," Willow replied, keeping the small smile on her face.

Willow shrugged softly.
" Normal. A bit bored, but there is some interesting stuff to find and do as well," she replied.

Holly nodded. "Ok. That's good to know. Well, I hope to see you later!" She waved to Willow as she started to walk to the next apartment.

Willow just smirked at you.
" Yeah. See you later," he replied, going back into her apartment.

Holly went around and introduced herself to a bunch of other people before going back to her apartment to unpack her small amount of things.

Willow went back to sit at her couch, thinking about Holly and smiling.

Holly went into her bedroom and looked around again, before starting to unpack her things. She let her thoughts drift and she started thinking about Willow.

As Willow began to think about the girl, her apartment began to have a very stuffy and she began to hear echos of screams. She narrowed her eyes around the room, glaring.

Holly had almost put all of her clothes away when she heard a laugh behind her. She twirled around, but nobody was there. She was confused for a second, before writing it off as just moving stress.