Hell's Rising Revenge-Whispers of the Past discussion

"Demon Sunday school story. God prefers humans to angels. Lucifer gets jealous and then he gets creative. And he twists and tempts a human soul into the very first demon as a 'screw you' to God. It's what got him locked up in the first place."

The first demon was created by Lucifer, an archangel, after God banished him from Heaven for refusing to revere humans. In revenge, he took a human woman - Lilith - and stripped away her humanity to make her the first demon. Making Lilith the Mother of Demons. For this offense, God commanded Michael to imprison Lucifer in a cage in Hell.
Demons have a belief system analogous to humans, but while humans believe in God as their higher power, demons view Lucifer as theirs. No demon had ever actually seen Lucifer. Until his releasing. If this is true, it would mean Lilith was turned into a demon without seeing her maker.
All demons were once originally humans, who become demonic when tortured in Hell until their humanity is lost. Prior to becoming demons, it is unclear on what criteria the human spirits are judged as being worthy of Hell, other than selling one's soul to a crossroads demon or being a witch.
Recently it has been discovered for demons to live with one another in large nest of the same species.

The Hierarchy of Demons

Hell was created sometime after Lucifer's rebellion. It is a place where demons are produced from human souls after centuries of torture. Human souls can get sent to Hell after making deals or agreements with crossroads demons or other demons. Hellhounds hunt and then kill humans who made a demonic agreement and then the human's soul is sent to Hell. Black-eyed demons are constantly being created, and they occupy positions on Earth. Time itself is also altered in Hell, as 4 months on Earth is equivalent to 40 years in Hell.

The exact structure of Hell remains undefined, "there's a real fire in the pit, agonies you can't even imagine." "...a prison, made of bone and flesh and blood and fear." Some can be seen suspended from hooks embedded in them when their soul arrives in Hell. Angels can bypass Hell's defenses, enter and retrieve human souls, as Castiel and other angels laid siege to Hell to save souls before. Death can enter Hell and bring souls back to Earth. No one truly has power over Lucifer's cage his bonds can never be broken without several task being completed before hand by a mortal or half mortal soul.
Azazel was a significant leader among demons, directed as he was by Lucifer in the plans involving the Special Children, and the plot to release him from his prison. Lilith will continue the plan until her deaths and Lucifer's release.

◘Telepathy and telekinesis - Demons can read minds. Some can influence an object's movement with their minds.
◘Mortal Possession - Demons can not take human form on Earth (The central Plane) Therefore they need humans to subdue and embrace. Given they are only spirits themselves they must enter a mortal body and take it over all together and it will be as if the demon took on a whole new form as well as the mortal as once they possess a mortal body they can shift it to appear as they desire.
◘Superhuman strength and enhanced endurance - While hosting a demonic entity, a human's body can be made to perform extraordinary feats and resist damage. However, when the demon leaves, the host often dies of its injuries.
◘Can resurrect or heal people, but only if a deal is made.

◘Mind control - Demons can influence and control the actions of human beings.
◘Pyrokinesis
◘Injury to humans by thought
◘Destruction of objects with telekinesis
◘Resurrecting people at will

◘Exorcism - When a demon is exorcised via ritual, it returns to Hell.
◘Preventative Charms - After one is possessed, Angels can give the mortals charms to protect against possession.
◘Preventative symbol tattoos - (view spoiler)[ 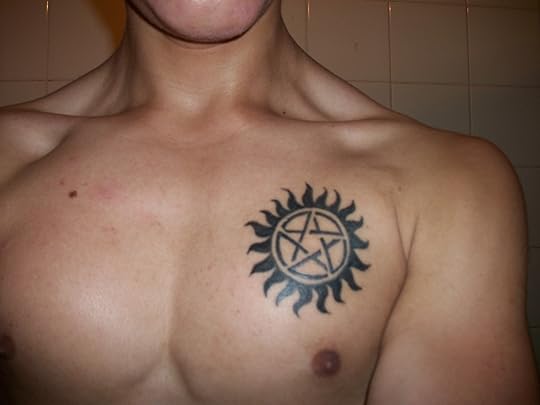 ◘Holy water and consecrated ground - While most have some vulnerability to Holy Water, higher level demons, such as Lilith and Azazel, appear immune. Some demons are also able to enter consecrated ground such as churches. Unfortunately this is not so for Dark/Fallen angels still running with holy blood.

◘Salt - Most cannot cross a line of salt and they feel intense pain when they come in contact with it. Hunters use it in shotguns to wound them.

◘Iron - They cannot cross an iron line, and can be hurt with an iron rod.

◘Devil's Trap - A symbol that is marked on the floor or ceiling that can trap a demon within it. If carved into a bullet and shot into a demon, it will bind the demon to their human and make it impossible for them to move far. (view spoiler)[ 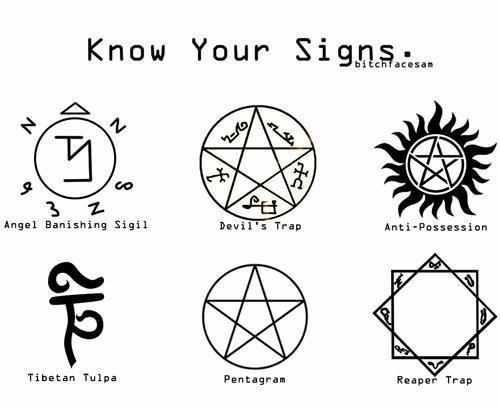 ◘Holy fire - While not capable of killing a demon, it will cause them great pain.

Means of Killing Demons
There is no true way of killing a demon as they are immortal souls. One can only banish them back into Hell unless their souls are set free.

◘Angels - Angels have the power to kill demons with a touch. As well as set their souls free cleansing them of evil.

◘Death's scythe: Death's Scythe can also kill demons. The only thing that can knock a demon into nothingness the only weapon known to be able to truly kill a demon as it destroys the soul.

◘Burning earthly remains - Demons, like spirits, can be killed by burning the bones of the bodies they had as humans, before they became demons. This only includes the bodies they have possessed, unless the bones of the demon are still existent. some demons once their bones are destroyed naturally not by mankind they have no bonds holding them to the Earth and can roam freely.

◘Spells - There is a spell that can kill every demon in a one-mile radius that requires the heart of a virgin. As long as the possessed haven't been killed already, they will survive the spell. Demons can also be killed by a spell described in The Word of God tablet that completely destroys both the demon and the possessed mortal.Requires impossible ingredients.

◘Angel sword - An angel's sword is also capable of killing demons. This splits the evil from the good within the soul should the demonic soul be completely evil it will simple vanish to nothing.

Mod
The Princes of Hell of course hold greater power than any other demon or fallen angel. Some are Fallen angels and others were born demons. Their powers resign in the element of their sin.

Hell's Rising Revenge-Whispers of the Past