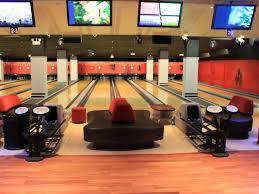 (( Wait, have her and Jesse already agreed to meet here to hang out, or not? ))

Jesse opened the door to the bowling alley, and was greeted by the sight of many bowling lanes lined with pins. Accompanying the lanes, was the constant splatter and konk of the pins being knocked over by bowling balls. He hadn't been to a bowling alley since, well, last week. However, he hadn't been to a bowling alley with a girl in, well, never. He always had his glasses with him, and today he was wearing black jeans with a white and black stripped shirt. He wore a dark grey unbuttoned shirt over his stripped shirt. Jesse originally put on one of his gamer shirts, then he realized something: he was hanging with a girl. He was going to go bowling with a girl who was actually interested in him. Or at least, he hoped she was. No wait, he prayed to God that she was. When he walked in, and he saw Clover sitting at one of the lanes by herself, he felt guilty that he wasn't early enough. He hurried over to her, tripping on the way, then he stood before her. "Hey," he finally said.

( I knew I had forgotten something. )

"My day? Oh, it's been good. I've been sleeping, I've been eating, and I've been surviving life. I'd say it's a day well done. How about you?" Jesse asked Clover. Even though the two of them were just hanging out, he couldn't still fathom how this had happened. He didnt do it, but he knew that if he pinched himself, he'd find that this was all very real. Clover was here, and she was talking to him. This was one of those times where he was glad that he didn't have a parent to fuss over his hair or clothes with. Thinking about his parent though, made him remember something unpleasant. He dismissed the memory.

Jesse raised one of his eyebrows, and with a curious smile, he said "Is it that guy from earlier that working the bowling lanes? I saw him give me a look earlier when I came in, and if he's got his eye on you, then he's about to learn that I got some spirit in me. I'm 165 lbs of pure unaltered nerd, and I know how to go Bruce Lee on anyone who talks to you." He laughed then he found himself realizing that he'd never been so easily open to protecting Clover. Then again, she was special to him. She was pretty hot too. "Oh god.." he thought to himself when he found his gaze lowered when she crossed her arms over her chest. He looked away politely to hide any sign of blush. "So," he said after several awkward moments of silence. "When did you want to start bowling?"