42 views
Off Topic > Your favourite cryptid

Mod
I'm originally from England but the country where I live now is in northern Europe and has a large amount of forest. And jogging in them isn't that uncommon, even at night.

Two years ago on the news there was a story about a guy who went for his evening jog. He was moving between the trees when a large lumbering beast confronted him. He ran for his life and it scratched at him with large claws leaving some awful wounds. He climbed a tree and called the police. They found him in the morning.

He swore that it wasn't a bear, and the police believed him! It was cordened off for a few days as hunters went in but they came back empty handed. After all the thick forest spans for miles with lots of places to hide. There was no explination for what it was, even the police were stumped.

I didn't hear more of the story and I never saw it translated into English, and after a quick search right now I wasn't able to find it again.

It set my mind whirring with ideas!

I was in an international class at the time and lots of people had different ideas when I brought it up. One of the women even said that her husband (a native) told her that the forest was home to witches!

News articles like this I think are great for stories. Whats your favourite cryptid? Is it 'real' or completely from mythology. Do you have a local story?

What inspires you? Do tell!

My favorite cryptid would have to be our local cryptid, Bigfoot or Sasquatch. 7-9 foot tall hairy hominids, usually shy but occasionally rather nasty. Lots of tales of people encountering them in the 19th C., lots of footprints, now even some DNA evidence for their existence in the remote wilds of Canada...

Mod
I always wonder about them! I read once about the soviet union sending out squads to kill the ones that lived in siberia. To be honest there are so many places to hide it wouldnt surprise me if there was one there at somepoint, or even now!

I love sea-monsters: there's just something so exotic about some of the real-life underwater creatures that is enchanting, and I sort of lost my reason when James Cameron did his whole bottom-of-the-ocean thing last year.

Also, does Cthulhu count as a cryptid lol?

Pfft everyone knows Cthulhu is real!

Fun fact! Bloop is a noise recorded by an american submarine, they said it was organic and huge. and inspired the movie Cloverfield.

This is from the wiki article - The roughly triangulated origin of Bloop is approximately 950 nautical miles (1,760 km) from the more precisely-described location of R'lyeh, a sunken extra-dimensional city written of by H. P. Lovecraft in his famous short story The Call of Cthulhu

Is Cthulu 'organic' as we understand the term?

that beast was a werewolf!

Mod
That's what I said lol

I tend to like aliens and extradimensional beings. You ever hear of BEKs? Black Eyed Kids?

reply | flag *
message 12: by [deleted user] (new)
Apr 03, 2014 09:41AM
mirrors fascinate me.
i noticed a movie is being released that prominently features a mirror, and i wonder how much the movie will fall short of the possibilities. that's a negative expectation, but most horror movies fall short of their potentials.
i first noticed mirrors when i was knee-high to a grasshopper (i'm 62) and often wondered what could use it as a portal. light is basically just reflected--but not quite. think about that: when i look into my bike's mirror, 3 inches away, i don't focus 3" away. i focus on the cars 100 feet behind me. newton's work on optics doesn't cover that impossibility.

anywho, mirrors intrigue me. mayhaps a book, beyond the mirror. 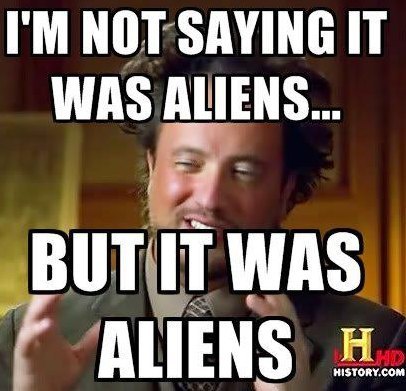 When I was a child I was fascinated by the Loch Ness Monster. Of course, every single one of the famous photos of Nessie has been debunked or revealed as a hoax over the years, but I was a kid and I read the kind of books that don't mention that. You know the ones.

Ah, Nessie, you creepy imaginary bottom dweller. What hijinx will people pretend you got up to next? Ha ha.

@J. David The photos were debunked to calm down the minions that couldn't handle the truth. That does not make any of them fake.

Mod
I have to agree with Kamil... They debunk to hide so people are kept in the dark.
They do it with aliens, so why not with Nessie. :p

Mod
I don't think the original sightings were ever debunked, before the photos. Since the Loch is so deep and leads out to the sea, I don't see why something wouldn't migrate there to breed if it's been doing it for thousands of years. I believe in Nessy!

I'm wondering, as a pair of rednecks have recently killed a mange ridden raccoon in the hopes it was a chupacabra... Why is the media pushing that it looks like a dog and not the bipedal lizard it orignally was?

Mod
NO ONE IS SEEING MY POINT OF VIEW ON TWITTER!!

*Slumps off into the corner*

@Bisky, I read an article some time back about some fishermen who discovered a fish that looked like a sea-monster. It was around 3 meters long and had the creepiest eyes and mouth. Some marine biologists thought that it was probably a type of fish that normally lived deep in the sea but came to the surface to die.