so, what you wanna do

Um I'm into anything really

okay, uh high school back to school dance then?

you wanna it to girl-girl or guy-guy?

k. you can make your character first

Sure but I Got to go to a party

Name: Sara Harrison
Age: 16
Appearance: Long red hair, real green eyes, small build, 4'9 in height hair to her hips.
Personality: loves being nice she doesn't like being rude, but she is sensitive and shy too.

Sorry it's small my phones about to die

I don't mind that it is small

Okay and back finally.

Sara got ready for school and thought of the dress. She was really excited for a minute. It is bugging her a bit. She didn't want to go back to school. She really didn't.

Victoria got ready for school, she put on a simple red dress. Victoria didn't mind wearing the dress she was going to wear for the dance later, it made her look like a old western saloon girl. For School, Victoria was just wearing a simple red dress.

Sara went to the school wearing a simple dress for the dance after. She had her hair in a braid and her dress was school appropriate.

Victoria twirled around in her red dress

Sara saw Victoria she was a bit to shy to say hi.

"Sara," She said a bit shyly to Victoria.

((Name: Brenden Cote
Age: 18
Appearance: [image error] with blue eyes
Personality: He is kind and caring, but can be a jerk.

"Nice to meet you Victoria." She said to her.

"So, your new here?" Victoria asked

Sara nodded. "I just moved here." She said to Victoria."

"Kool, I've been around here for a while. Live around here with my brother, right next door to his best friend, you'll always see the two hanging out, they are not lesbian or anything like that, they just hang out with each other a lot"

Sara nodded. "That's cool. I never would have assumed that." She said to her. She wasn't going to be rude to anyone about that crap she doesn't judge anyone for anything at all. She hates everything about a person that judges her or anyone else.

"Thats kool, so is there like any place you like to hang out at school or you just go pretty much anywhere on campus?"

"I usually go anywhere on Campus." She answered her saying the truth.

"Used to do that a lot, but I Got lost my Freshman year doing it"

She nodded. "I memorized the school map I got. I haven't gotten lost at all." She said to her.

"That's kool. The map didn't always help me, half the time it got me lost"

She nodded she understands that.

"Now, though I forget about the map and just memorize my classes and what wing they are in"

She nodded understanding that. She knew that immediately.

"So, you into any sports or clubs?"

"I'm in Track and gymnastics." She said to her. 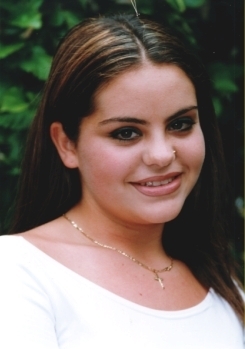 Boyfriend: Brenden
Ex: Jason Thompson
Other: Used to be part of Jason's gang, now hates Jason
Personality: Riley is a sweet girl who loves to party and she loves hanging out with guys. ))

"Track is always fun" Riley said, as she walked over to the two girls then added, "I'm Riley"

((Okay I'm working on the character for the second rp.))

((kk, after that then we can rp some more there and then later on you can work on the other characters for this rp))

((I added more cause I was gonna, but to be fair I wanted us to be even))

((Ya, while you do that we can get back to the rp on the other one for a bit))