Hey!
I haven't talked to you in forever! How're things going? Whatcha been up to lately?

I know! I lost internet connection at my house, so I decided to take a small break from GR. Things are good though. May be a little busy with my job though.

Buuuut I'm back for good(: It's crazy. I feel like a stranger again, lol.

Well, I'm glad to hear that things are well! What kind of job do you have?

Yay! But that's how it is though! I was off for a few months and yeah, it took a bit to find my spot again xP Silly thing.

Oh I know!! All is good on my end as well. Just trying to lay low, enjoy the... nine days left of summer break. :( And then I go back to hell- I mean school.

Eh. I just work at safeway.

I know, lol. Still trying to figure everyone out with new pictures and a few different usernames.

I know, same here ): Not looking forward to that!

Anyway, do you have any ideas for our RP?

Yeah, I bet. There are a bunch of awesome, new roleplayers that sprung out of nowhere too. I'd throw up a request :D

I might! What are you in the mood for, ma dear?

I love their sandwiches!

I honestly don't care. It's been awhile, so I have yet to come up with any good ideas. But lets stick with reality.

I'm actually about to get off. I'm dead tired, and have an early day tomorrow /: I may be on later tomorrow night if work doesn't kill me xP

Nice talking to you again, though, Brooke!

Mee too! Especially the long ones :D

No problem! I shall try to think up something tomorrow morning, because my head is so dead.

Good night! Have a good day at work tomorrow!

You too Brightside! It's good to have you back!

Haha. Those are the only ones I eat!

Thanks! I hope I do too.

It's good to be back.

I don't blame you, they are the best.

So, just so I have something to work with, do you feel like something more on the romantic side? Or mystery? Creepy? Funny? What are you kind of in the mood for?

Honestly, if the idea is good, I'll roll with it. Maybe make a few changes, but I'm not being totally picky.

Yeah, we could definitely mix all of those in here somehow!!
So, as for the mystery part, what should that consist of? Ghosts? Murder?

Muuuuurder. Something maybe like that movie "I Know What You Did Last Summer" ?

Ooh, sure!
Maybe the town they live in has some kind of fucked up history, and instead of the kids killing someone, they stumble upon records or files of this history, and perhaps whatever it was is still going on, and the cult leader or something decided to kill them off so they don't go telling everyone about it.

Doesn't really matter!
What do you think?

And how many characters each?

Mm, two? And what age group do we want them?

So a boy and girl each?

Oh. And simple formats or detailed?

I'd say simple eh? So we can get started?

Okay! But I'll actually have my characters up probably tomorrow morning.

Hey! This is totally weird and random, but remember that RP we started of the girl getting pregnant by a guy who was kind of a player? It was a one-night stand type of thing, and she decided to look for him?

Yeah! That was with me hahahah. What about it?

Hahaha I don't know. It just randomly came to mind.

Hahah that RP was awesome!

Yeah, I liked it.

Would you actually want to continue with that one?

I shall make my chickie C:

Personality: Key traits
Charming. He's used to getting what - who - he wants. It's not hard for him, really, considering that he's wealthy and handsome.
Not-so serious. Seriously. You have to tell this guy you're being serious a thousand times before he realizes you're not kidding, and he should stop laughing. But if you want him to be serious, you're asking for trouble.
Chill. Jacob doesn't like drama, even though he may be the one causing it. He likes to have a good time, and distance himself from people who want to ruin it.
Flirty. Jacob obviously likes to flirt. If you're a smokin' girl, who gives a fuck if you are taken? This guy guarantees he'll show you a better time.
Wealthy. Yeah, it's not a personality trait, but he uses it to his advantage. No, he isn't going to bribe you. Don't worry, he doesn't flaunt his money. He just...well, you'll see.

History: Who wants to know?

Relationships:
His parents are both alive and well.
He has a younger half-sister who's basically out of the family picture since she lives with her mom.
He's had plenty of girlfriends, but shows no signs of settling down.

Other: He has a big mouth. He likes to spill the beans about his latest "hits and runs". 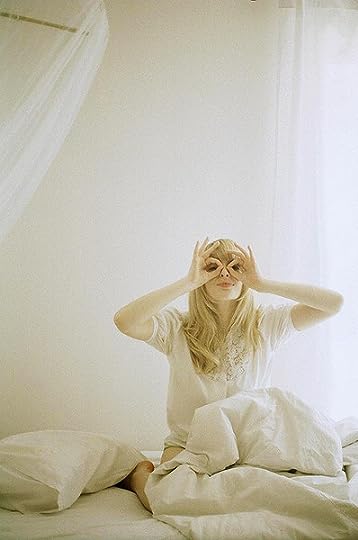 Personality:
Fun. Hannah knows how to have a good time, and that doesn't mean drinking every bottle of scotch that her hands come in contact with. No, she knows how to have clean fun, something people these days have no idea how to do.
Gentle. She is a very gentle person, with her hands and with her words.
Easy-going. Don't worry about disappointing Hannah, because her expectations are always set low. You gotta bail on a date? No problem. You want to hang out last minute? For sure. She's always open to suggestions.
Determined. Hannah is a very determined person, especially when it comes to her schooling. School comes first, no matter what. She wants to get a good job and have a good life, and nobody, nothing, is going to get in the way of that.
Thoughtful. She loves to do things out of the blue and surprise people. It's just a little something she likes to do.
History: Long story short, Hannah was born when her mother was just nineteen. Her Dad took off, and so it was just Hannah and her mom. The two of them really struggled with money and were never able to live comfortably, so that's the reason Hannah is so strung about her school work. She just wants to live comfortably. She wants to be the exact opposite of her mom.
Relationships:
Mum
Friends
No boyfriends. Not until she's done school.
Other: She wants to be a psychologist. She will be a psychologist.

So where should we start, and who should start?

I don't know! Did you want to start over, or where we left off?

Wellll...I thought we could just continue where we left off, because a lot hadn't happened yet.

I'm pretty sure we were at the part when Hannah found out she was pregnant, and she decides to look for the guy who knocked her up.

I think that sounds about right!

Do you think you could? C:

Maybe he's at the bar? And then Hannah can go looking for him?

(I AM SO SORRY FOR THE LONG WAIT! I'VE BEEN VERY BUSY. PLEASE FORGIVE ME(:)

Jacob was sitting in his favorite bar, at a crowded table surrounded by at least ten other guys. You could just imagine the noise level. Everyone seemed to be having their own conversation, and the drunk people were always the loudest. Jacob could only roll his eyes as he was interrupted - again - while trying to tell a story. He didn't know what was so damn funny, but the same mini-group of guys kept laughing every three seconds! He finally used his brain, and decided to just go sit somewhere else with his friends. Unfortunately, the whole place was buzzing, so there wasn't exactly any quiet corners. He knew the bathroom would be quiet, though, but thought that would be just a little weird. And...maybe gay.
"Okay, fellas! Lets take a smoke break," Jacob announced. He got a few nods from the men who did smoke, then led them outside.
Outside, there was a little. You'd think that's where bad things happened, but it wasn't like that. People mostly went out here to smoke and maybe clear their mind. Or, like Jacob wanted, a conversation. He didn't actually smoke himself, so he was able to continue in his tale of latest smashes.
"So yeah, where was I? Oh! So this girl invites me over, and it turns out she has a smokin' roommate. Guess who had twice the fun that night?" Jacob asked. The guys immediately began to whoop and holler, throwing in their own guesses of how the night went down. All-in-all, it was a really good night. He decided not to throw in the part when someone's boyfriend comes in and invades the party. Being a dumbass, Jacob had told the guy that he wasn't invited. He basically got his ass kicked, then thrown out. It wasn't a serious fight, of course. At least not a fair one, since Jacob wasn't 100 percent sober that night.
Anyway, Jacob was a lover; not a fighter.

No worries!!! I've been really busy myself!!!

Okay(: No rush then!

Hey!! I think I'll be able to reply really soon! I'm getting into the groove of school again and I'm able to manage my homework load, so yeah! Expect a reply veeeeeery soon!! :D