So while you are hyped up on coffee and I am about to pass out from lack of sleep I think this would be a good time to brain storm. Do you have any ideas you want to role play?

I prefer doubles just so thing are a little more even but that is really up to you as I prefer role playing a girl.

I don't really have any preference for F/M. F/F or M/M and usually wait to decide after we have a clear topic.

Probably didn't help much but that is the best I got!

What about a male werewolf that is part of a pack who are all trying to keep their secret from the town and somehow a girl from his school finds out and she is faced with the decision to keep it a secret of tell?

Sorry, I totally pulled that out of my butt so let me know if it sucks!

You can choose the second idea if ya want!

Okay! I hate to do this to you but I'm gonna go to bed!

I was hoping I could play the girl in that idea and then you can decide who you want to play in the second one?

OKay! Um ya you said you wanted to do a second one right? Or not, I am fine with keeping it just as one I guess its up to you!

Okay! Just one then? I couldn't sleep last night so I worked on my girl so I should have her up before I have to go to college!

Name : Danielle Rose Padalacki Nickname: Danny, only Danny. She loathes her first name.
Age: 17 Birthday: March 4
Sexuality :Straight
Piercings/ Scars: Other than her ears, and cartilage in her left ear Danny doesn’t have any other piercings. Scars, though not rare for someone as clumsy as her are usually small and unnoticeable except for the long one down her left knee after she ripped the cartilage and had to get surgery.
Tattoos/ BirthMarks: She has a tattoo of the date of her father’s accident and in her eyes death under her left breast because it is the closet she can get it to her heart while still hiding it from others. As for birthmarks she has a baseball sized one on her left hip and a small one on her right shoulder blade.
Appearance: Curly long brown hair that reaches down to her hip bones, eyes that are dark brown and fair skin littered with freckles anyone that bothers to take a second look at Danny would think she is fit to be a super model. She has a round face, that always gives her the appearance of an innocent child no matter how old she gets and long eyes lashes that make her eyes the center of attention only add to her natural beauty. Her hair, which is naturally wild with curls add a sort of recklessness look to her that if anything keys right into her personality. Her lips are full soft pink and when she smiles seemed to brighten up the whole room, when she laughs it is with her whole body and most the time can’t help but throw her head back and just let the warmth of the laughter seep through her body and that is something she craves like an addict. She has pale skin and not from the lack of trying to tan she simply burns and then goes back to the same shade as a people who has been dead for a while. She stands at five foot two and is a mere hundred pounds and while her bones don’t stick out like a sick person they sit right under her skin as if waiting for their moment. Like her face, Danny’s body is riddled with freckles when she was younger her mother used to say the angels would look down on her beauty and not help but press their lips to it resulting in hundreds of freckles. It might be her lack of body fat but for whatever reason Danny is always cold so even on the hottest days of summer she can be found in an oversized sweatshirt that always falls down her shoulders no matter how many times she pushes it back up. For the rest of her clothes she stick to jeans, hating the feeling of wearing shorts or skirts in public and old black converse that look like they have seen better days. She has a small silver bracelet that hangs of her left wrist with a simple little red heart at the end, a gift from her father and one she will cherish forever.
Photos: 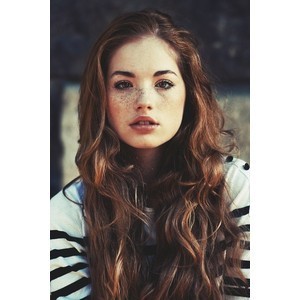 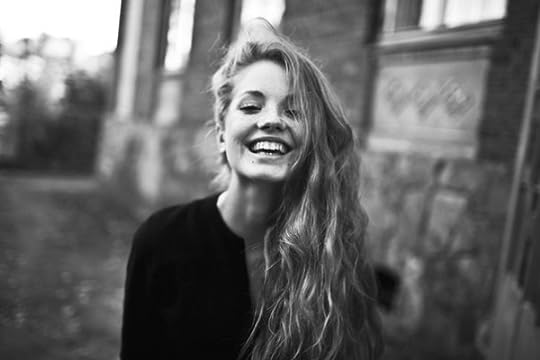 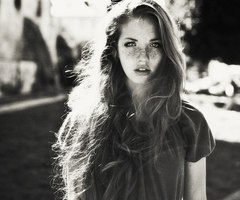 Personality: The consequences of having a hard life have finally paid its toll on Danny, resulting in more than a few students thinking she is a mute when in reality words have always seemed worthless in her experience. It isn’t hard to tell Danny has been abused one look from the poor girl and you can almost see her body trying to cave in on itself and become as small as possible. Though she may be quiet, don’t let that fool you into thinking she is ignorant to the things around her years of experienced have taught her to always be aware almost like a caged animal in a pen just waiting for the stick to be thrust between the bars. She is smart though, in books and everyday life as all abused things have learned to be and her genius is shown through her straight A’s she has gotten in school ever since third grade. She loves to read, write, draw anything that can give her an outlet of the world she is forced to live in and over the years has even become amazing at all of the above. Drawing though has always been her passion and she can spend hours a day just trying to get a person’s eyes right in a drawing. In fact one of her hobbies is taking a student from her school every week and drawing them in a way that shows who they truly, are after finishing she hangs them in her room. As for most people who haven’t had the best life Danny is drawn to happiness and safety like a moth to light, and she is always around to comfort those who need a little kindness. She is loyal and always loving to those she sees fit to care for and when comfortable around you can be a real joy. She has been dancing since she was five and finds it one of her favorite things to do and one of the only times she feels free.
History: In the beginning everything was magical, she was born into a loving home with a mother and father who cherished her like every child hopes they will. She grew up doing what she liked and with a family that always supported her even when she told her parent’s she wanted to chop off all her hair at seven and dress like a boy. They accepted it, accepted her and the next year she spend climbing trees, catching bugs and being called a little boy from strangers. The trouble started when she had just turned nine that was when the fighting started, about money, about time spent at work sometimes even about what they were going to be having for dinner. It ended Christmas morning when she was ten and the pair of underwear in her father’s brief case had been found. In the midst of opening her Christmas presents Danny’s mother stormed out and she hasn’t seen her since. For a while her father tried to make it work but after a while trying seemed too hard for him and he moved around the house more as a ghost than the man Danny loved with all her heart. Without the previous love and support Danny was used to growing up in she began to wilt, like all flowers do and when they bully started to pick on her for her freckles not even remembering that she had gotten them from angels saved Danny. As the years went by she slowly tucked deeper into herself until all that was left was a shell of her previous bravado and self-worth. When she was fourteen her father started bringing another woman into the house and while it worried Danny she hoped that maybe things could start to go back to the way they were and so when the three siblings moved in with the women she smiled and shared her things even though she never saw her possessions again. When the big day came she happily walked down the aisle scattering rose petals all over the place and hoping they could all be a family now. When the older boy twisted her arms to hard and left bruises she covered them up, wanting hoping things would get better if she just held on. At sixteen all that hope ended when the plane her father had been on crashed, he lived if that’s what you want to call it. He lays down at the hospital room 113 in a coma and has been that way for the past year. Without her father and her mother nowhere to be found the abuse laid down on her from her step-siblings and even step mother worsened. She works down at the local Diner every cent she has going to trying to feed and cloth herself as best as she can.
Other: Nope.

Thank you but don't even worry about it! I get spurts of creativity which then dyes so she was really detailed by sometimes my posts wont be!! (:

Sure that works! Do you want me to make another character?

I'm not sure if you wanted to add romance in the role play?

Still up for this?