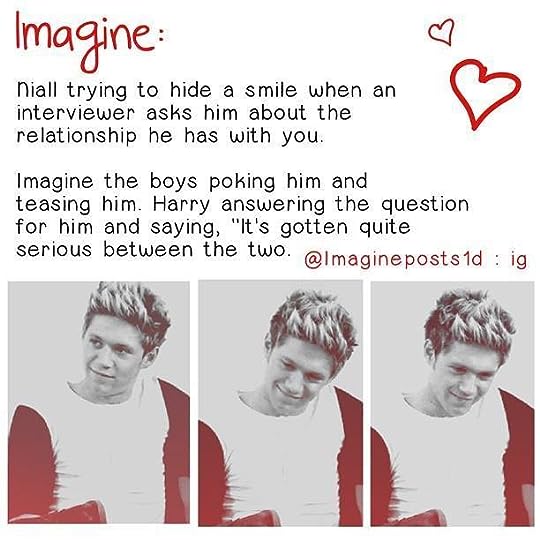 One night, you're all alone in your flat, your heart racing because of the nightmare you had just awoken from. You can't move at first because you are paralyzed in fear. The first thing you can even do when you first move is blink, and that is one of the most terrifying things, because you don't know what you'll open your eyes up to.

Soon, there's a light next to your head an a loud noise going through the room, your phone is ringing. Tears flood from your eyes from the shock, but it at least got you to move, because you jolted upright in bed. You quickly reach over and pick up the phone. Your voice cracks as you place your hand to your heart, turning on the lamp. It's storming outside, how perfect....

"Hello?" You whisper into the phone.

"Hello?" The voice says on the other end, but it's not just any voice, it's Niall.

You try and calm yourself, his voice helping a bit, but not as much as you'd like. You can't help but shift your eyes around the room, your hand flinching ever so often.

"Did I wake you up?" Niall asks, feeling sheepish.

"You sound as if you just woke up." He points out, trying to call your bluff which he often did.

"Nightmare." You say it as it's no big deal before a large crash of thunder echoes through the outside air, causing you to jump and let out a small squeak.

"Are you okay?" he asks, you can hear him move around from the rustle of the covers.

"Yeah. Probably just going to watch some television." You slowly slide out of bed, the air cool.

"Okay. I'll let you do that then." He answers, he sounded a bit put out at first.

"Okay...." You didn't want to argue for him to stay on the other end, not knowing what to say really. And he also might be tired, he was pretty busy the past few days.

You two hang up the phone, nothing much being said. You turn on the living room lights and slide under the cover on the couch. You don't fall asleep, just watch some old cartoons from when you were a kid, you just had to buy them on CD because of the new stuff they have on now.

There's suddenly an unnatural noise from outside, causing you to bolt upright from the couch and look out the window, your eyes wide with horror. You start shaking like crazy, soon, the sound is to the door. You start inching back on the couch, clawing into it lightly.

The doorknob jiggles slightly, soon, the sound of metal scraping against each other, making a soft matalic noise, the lock slowly turns. You're about to bolt before a blonde haired boy steps in. Niall.

You sigh in relief, dashing toward him and wrapping your arms around him, even though he's soaked in water. "What are you doing here?"

"You had a nightmare." He says in a bit of shock when you ran to him. He hugs you back, "I came to make sure you were okay."

You look into his face when he says that, leaning back, his hands on your mid back, the front of your body soaked. You both smile, leaning in and kissing each other softly. Niall kicks the door shut, "Come on, let's get into warm cloths." he says. He had put some clothing there just in case something like this happened. And because he was to lazy to take them to his place.

You both go grab yourself something dry, going into different rooms to change because of Niall's shyness.

You meet back in the living room, Niall beating you. You two cuddle on the couch, you leaning on his shoulder as he has his arm around you.

Your heart skips a beat, your hand lightly on his chest, "I love you, too." You say back.

He leans down and kisses your forehead, "Night." He whispers.

You both crash on the couch afterwards....

Mod
AWWWWWWWW THAT IS SO ADORABLE!!!!!!!