Alrighty! So, what shall we do then?

Been thinking about it, and since you want a more advanced type of thing, maybe we could go for a horror or drama of some sort? I have plots developed already, and my characters are best suited for it. Here are the least crazy:

1) Three months after her best friend goes missing, a woman receives a letter in the mail. Apparently, some quiet nobility knew her now-deceased boss, and has "an opportunity" to discuss. She's lured into the man's castle, and soon notice that her new mentor/boss/etc. is acting very strange...and what's he hiding in his cellar?

2) An Australian man loses his family, home, and one eye. Now deranged with anger and a lust for revenge, he kidnaps a foreigner whom he mistakenly believes to be his wife, and basically replays the events of his life while trying to "fix" things so they go as he wanted them to.

Note that I only have one male character, who happens to be half-human. So for the second plot, you would either have to play the male, I'd have to create a new male, or we'd have to find some way to explain how he's also a vampire.

Are you opposed to using misc. characters that haven't actually been developed or created (basically filler characters who have no personality or background, and just serve to further the story)? Because that makes it more interesting.

Yeah, I'm definitely okay with making filler characters and developing them later in the plot. Qute honestly, I'm falling for the first plot. But wow! You have amazing ideas! If these are the least crazy, what could be the most? Haha!!

Cool. So if we're going with the first plot, then I volunteer to the the male since I have the perfect character for that sort of thing. 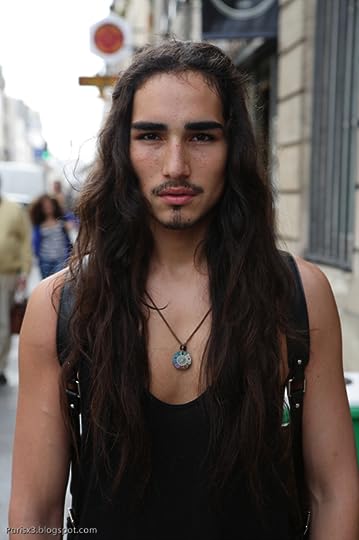 Perfect. I don't think we need any more characters for now, as the rest I have up my sleeve will show up as fillers later.

I am, sorry. I've had some health problems, and I've been unable to get on for a week or so as I healed. Sorry again.
But yeah, I'm ready to start when you are. Should I start, or could you?

The southernmost part of the city sweltered and spoiled in the August heat. Relief was nonexistent; the air conditioners that still functioned only released gales of hot, foul-smelling air through both sides. Wherever you went, down the winding narrow streets; into one of the skinny brick boxes that lined the streets; further still into the moist, mildewy basements that supported them--wherever you went, the air crimped and quivered with the heat, and for all the sweat and the water and the circulating air you were standing inside a furnace.

No companion was to be found for the unlucky devils stuck in the boiler, either, except the all-too-eager mosquitoes and green bottles that remained even when their food source left. For the last six months of the year, in August especially, Norte was as good as abandoned.

On the other end of the city, near the salty pond that somehow never boiled away, a man glared down at the view from his studio's cathedral windows.

The heat worried him not, he couldn't feel it; his wives' waxy, melting faces inspired nothing beyond mild displeasure. The mosquitoes that swarmed his lovely abode only provoked a fit of laughter: they were in for a nasty surprise when they sucked the poison from his veins.

He had been in a state of constant vexation for days now. WHat to do--what to do? Everything had been so nicely prepared. His latest portrait was already hanging in the master gallery, and his easel already prepared for a new one. The letter--for a Miss Shirokov--was already perfectly written, enveloped, addressed, and stamped.

He had all his eggs in the basket, painted so prettily, weeks before the anticipated climax of his little drama.

And then she'd gone and died. Three months of amusement was all he gleaned from the pathetic wretch before she succumbed to the snake poison and collapsed, leaving his plans worthless.

Shirokov was surely on vacation, and likely would be for another month or so.

It was certainly a problem. But he was good at solving those, and as he glowered down at the damnable city in a fit of absolute rage it came to him:

Mail the letter. Prepare the chambers. Construct a new base for her waxen doppelganger. Do everything as before, but do the portrait first. Little by little, a mark at a time, so as to make the work stretch for thirty days more. Agonizing, but the only solution.

He retrieved the letter from the alcove table, rewrote the date, and happily strolled to the edge of his lot to drop it in the mailbox. At least the postal service still ran in August, the poor bastards.

Surely Miss Shirokov was on vacation. Having convinced himself of the assumptions validity, and formed his new plan with rigidity, the man returned to his studio and set to work.