Mod
Here is where the characters for the Skyrim rp will go.

*Note-the other Character section will be taken down Sunday, so if you want to post your own character with a pic, (My computer won't let me put up pics), do so before then.* 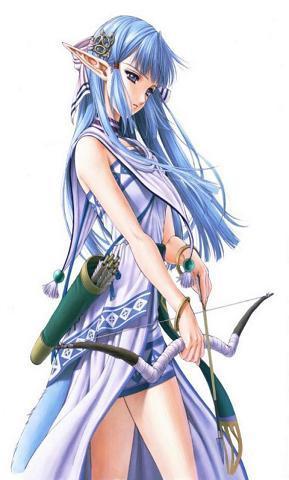 Class: swordsmen, and archer, a theif, but not in the Theives' Guild
Inventory: Elf bow, and iron arrows, a lot of gold coins, matches, and a bunch of picklocks
Background: She's a bit of a snob, but can be nice if you get to know her. Ran away from rich parents who had a cozy life, she stole their money, and their pride.

Mod
Name: Resin
Race: Redguard/Bosmer, (yes she's a half)
Age: 17
Physical Attributes/appearance: Green eyes, dark skin, Very long dark brown hair w/ slight green streaks. Wears adventurers boots and leggings with a tunic under a jacket. Usually puts hair up to keep it out of the way.
Class: Archer/Rogue
Inventory: Silver oak bow/bolts, vial moondrops pendant
Background: Father was a Redguard, mother a Bosmer. Father was killed in a skirmish with Bretons, causing a deep-seated hatred for all humans in Resin. Resin has spent most of her life in the forest with her mother, living apart from other woodelves as her mother is determined that she be raised in the Redguard traditions as her father wanted, even though all three were exiled from the Redguard they originally lived in. Both were forced to flee north into unfamiliar territory when Resin was twelve. Her mother caught a sickness and died along the three-year journey.

How do you copy pictures?

Race: Breton
Age: 15
Gender: Male
Physical Attributes: Sparkling sea blue eyes, white blonde hair in a pony tale, thin build (almost seems waitless as we walkes, wears long robe imbrodered with intricate detailes of snow flakes and a jacket of wolf skin along with that.
Class: A Son of Magicka (born gifted with great magic powers with little or no experience)
Inventory: Cane of Snowfall, 50 gold, x20 scrolls of fire, flint.
Background: Nerevaran was born with great magicka power, which is rare, but not unheard of with the race of Breton. His eyes are the sorce of his powers, and if he were to loose one of them, he'd be rendered unable to use magic. Though he may be a Son of Migicka, he still has great skill with magic without the need of his birth-given powers. He would spend long nights in his father's study learing the ways of potions, spells, powders and scrolls. But he had no experience with a sword. He's a bright, charming young fellow, and cracks jokes all the time. Life seemed to be going really well for Nerevaran. However, when he was 13, his mother and father were murdered by a Nord man... Seeking vengance, he went to Skyrim to search for the murderer.

Mod
Oh well, at least his pics are up!

lol, is Natalia in Skyrim or Cyrodiil?

Mod
Cyrodiil. And it's all done! *cheers*