Name: Ian
Age: 16
Grade: saphmore
Dorm building number: 1
Apperance: sorry I have to do this later
Personality: nice sweet curious outgoing smart nuckleheaded
Relationship/ cruch: none yet
Other: likes to ride motorcycles, play the guitar and song along an he has a great voice, do major stunts, try new things, and piss the teachers off 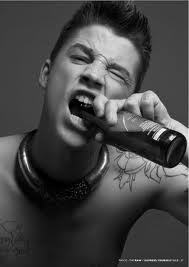 Name: Mordecai; "Cai"
Age: 17
Grade: Junior
Dorm Building Number: Dorm 1
Appearance: Slender pale body with short choppy black hair. He has powder blue eyes, tattoos covering his arms, and a "bad boy" image.
Personality: Unpredictable, he doesn't even know whats going to happen next. He's clever but doesn't let on; shy, but covers it with rude remarks. He's nice to a certain point, but not to everyone (He's nice to females.) He can be cruel at times, but that's because he's vulnerable. And he is vain to no extent.
Relationship(s)/ Crushes: Adrine, she's more than just a pretty smile.
Other: Habits- Cai smokes, bites his nails, and is very OCD about a few things.
Likes- Punk bands, menthol cigarettes, pretty girls, novels,skateboarding, partying, sketching, and graffiti.
Dislikes- Country, other vain individuals, short stories, church, guys who call themselves "Danger", and slow drivers.

*Also he has a brother named Vincent.

I concur with Ashbee's statement. lol

reply | flag
message 8: by [deleted user] (new)
May 13, 2009 05:02PM
Name: Alex Knight
Age: 17
Grade: junior
Dorm Building Number: 2
Appearance: tall athletic dark brown hair with bangs that fall in front of his hazel brown eyes
Personality: nice outgoing funny smart caring sarcastic kinda of a bad boy
Relationship/Crush: none yet looking
Other: loves playing the guitar and skateboarding hes quite popular and can be a flirt a little bit of a troublemaker

Mod
Does anyone want my character Ash to like theirs?

I can't wait for you to get started Ashbee.
We're going to have so much fun.
Also, it might help with our story =]

Are you done with Vincent yet?

Mod
guess what people? i have an idea! how about my character, or someone else's if you want, gets with cai, then they break up and she gets with vince? or the other way around?
tell me what you think! :D

"You couldn't even get with my 'sloppy' seconds," Cai says with a smirk.

well after they get done with you anybody can get with them.

"I am not that bad of an influence, and keep in mind, you've wanted my 'sloppy' seconds time and time again," Cai says with a sneer.

"Maybe I should quote you from a certain novella we are writing,"

Vincent from a novella: "I hate how he enjoys every moment of it, touching her hair, brushing her cheeks, and holding her hand; when I get none."

"And you say you don't want my 'sloppy' seconds, it sounds to me like your dieing to have them."

"i dont want your sloppy seconds!!! i want my own." lol

"Well, I don't think your going to find anything new."

Mod
"Hey, you'd be lucky to have me!" Ash says insulted.

Don't be a bumhole!

(Read Cai's information, it has been updated.)