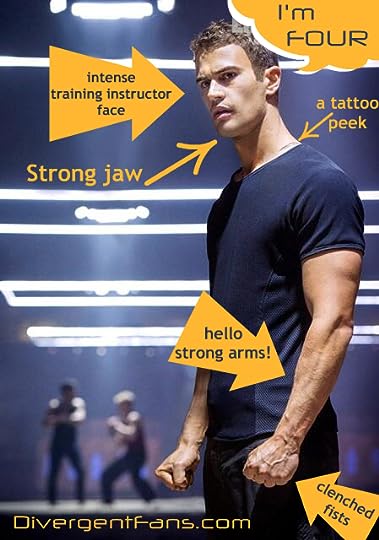 Physically sure. But they got his hair and eyes wrong. He was supposed to have really dark hair with deep blue eyes. I hoped that they would get him perfectly after Shailene and for the fact that he is FOUR.

Rachel wrote: "Physically sure. But they got his hair and eyes wrong. He was supposed to have really dark hair with deep blue eyes. I hoped that they would get him perfectly after Shailene and for the fact that ..."

No he doesn't match up to the description in the books an he looks way older than 18 in that picture and he is supposed to be 18.

I still can't picture him as four, I really wanted Brenton Thwaites to play four!

I think that who they have for Four is pretty close! I mean I know there r differences but I guess u can't never get it right now and I think that he will play the part right so I think that's all that matters and in a way he does seem like four

Lovegood_13 wrote: "I just can't see him as Four... I saw a person like Drew Roy to be Four. Yes he is very fit but he just looks WAY too old and not right!!!"

Drew Roy would have been awesome.

I think Theo can do a good job. He has Veronica Roths stamp of approval which is a good thing! Also the guy can act! I'm kind of disappointed about the whole eye color situation. I mean is it that hard to wear blue contacts?

Stormy wrote: "I think Theo can do a good job. He has Veronica Roths stamp of approval which is a good thing! Also the guy can act! I'm kind of disappointed about the whole eye color situation. I mean is it that ..."

I know right. They could have made his hair a little darker too while they were at it. He better do an amazing job to make up for this.

From the photos I've seen, I thought Theo looked way too old to be Four/Tobias -- he looks about 25. But I'll try and reserve total judgement until I see the film (or even the trailer).

I thought Theo was hot in Downton Abbey though! Haha...

No way! I still think of High School Musical everytime I see him... Tobias would hate that! Heh.

Eww no, Zac Efron would've been a horrible Four.

I just read divergent and then I found out its going to be a movie! I am both excited and a little cautious... I love that such an awesome book is going on the big screen, but I don't wanna be disappointed when I go c it. And I am a little skeptical by the fact that four is 30! But I hope he will do a good job (he better)

I think he was a great choice... not perfect but I have high expectations

Honestly, he's almost exactly how I pictured him to look

I can't picture Theo James as Four. I always thought they should get Jacob Artist for
the role.

oh my gosh yes Jacob would be a perfect four

I think Theo will be great! Like Shailene said, he is totally masculine just like Four and he is so cute! I can't wait to see him on the big screen

Agreed! Theos adorable <3 plus he seems like a really nice and laid back guy

I love Theo as a person, I just hope he does a good job as Four/ Tobias. I think he will.

He's growing on me, I think he could pull it off. But if he isn't wearing bright blue contacts for the movie then I quit..

I'm as frustrated about the blue eyes a everyone else. It's part of his character, I get that. However, would you rather have a person with striking blue eyes who can't act at all or Theo, who can convey the same emotions running through Four's blue eyes in his brown ones and is an awesome actor? Also, contacts could've bothered his eyes or something and they may have tried out blue contacts but they looked too unnatural on Theo. Remember that Veronica said that Theo was the closest to her image as Four than any other actor they tested, he was cast for a reason

I think he's PERFECT he fits my image of Four perfectly...well I think there's a chance that his eyes can be edited to dark blue and as for his hair , I think it looks lighter under the effects of lights

I just don't understand why the costume and make up people can't dye his hair and put on colored contact lenses. He has the body, but that blond look makes him less fierce than in the book.

I think he's great for the part, he's sexy and fierce:p I always forget that he's like 19 in the book and not younger so it was weird knowing who he was playing, but I think hes got the rough look down!((:

Sometimes contacts look very noticeable on actors and in some cases unnatural looking. So that could be a reason for the lack of contacts.

yeah I mean in the book his blue eyes always changed like almost with his mood..sometimes they were lighter or darker..I'd imagine that's a lot of work

Yes, and probably Neil Berger would much rather prefer spending money on special effects and marketing than on the complexity of Tobias' eyes. Though I think, blue or not, Theo will be able to convey Four's complex emotions through his own eyes and body movements.

Kaylah Eiramenna wrote: "I think he's great for the part, he's sexy and fierce:p I always forget that he's like 19 in the book and not younger so it was weird knowing who he was playing, but I think hes got the rough look ..."

I think he'll be pretty good as four

I think he's good looking and will hopefully act the part right, but if they were trying to portray Four exactly, I don't think they did a very good job:( like looks wise and what not

I personally think that drew Roy would have been a much better Four <3 he looks exactly how I pictured Four to be and that doesn't happen very often as many of you would know!

I think Four is BEAUTIFUL lol :)

^^Agreed too. I don't think anyone else would've been perfect for the role.

Agreed, I think Theo is perfect as Four!!!!

For sure. Ive seen some of the actors people suggested for the role, and I could just not see Four in any f them.But when it was announcwd that Theo was our Four, I knew immedietly that that was MY Four.

I honestly don't think Theo James is cute. And I pictured in my head that Four was literally HOT. So that is a disappointment for me. But thats my opinion. Also, shouldn't the guy who plays Four be younger? I mean Tris's is older but looks to be about the right age. And her hair ain't blonde either so some changes. I think the books will be better than the movies.

Theo James just doesn't do it for me at all, to be honest I'm not very impressed with the casting

I imagined four WAY different. I don't think they did it right.

LOL,guys. We have to give them cred. I mean: it's Four - no one will be right. Theo isn't what I imagined but hey. However, Shailene Woodley's great !

Yea, same. Hopefully the acting will cover up his... impurities

Personally, I think they did a great job! I think it's hard to find actors/actresses who look like the part and can actually act, so I think they put their acting ability first when casting, and I'm all for that. I would rather have someone who is a believable Four but doesn't look exactly like him get the part, as opposed to someone who looks just like him but can't act at all. And if it helps, I belive that Four is supposed to have ears that stick out slightly which Theo has. And Tris is supposed to have a longer nose, which Shailene has.

Physically, no. I was a bit disappointed actually. But I'm sure his acting ability is strong otherwise he wouldn't have been chosen for the part.