newest »
message 1: by [deleted user] (last edited Jun 09, 2013 04:07AM) (new)
Jun 09, 2013 04:07AM
Dragons
All of Tolkien's dragons share a love of treasure (especially gold), subtle intelligence, immense cunning, great physical strength, and a hypnotic power called "dragon-spell". They are extremely powerful and dangerous, though they mature very slowly. Because of this, Melkor's first attempts to use them against his enemies fail, as they are not yet powerful enough to be useful in battle. Despite their evil beginnings, they are not purely destructive by nature, as can be seen by Smaug, who wants to be left in peace, though he did force out the dwarves in the Lonely Mountain.
Dragon-fire (even that of Ancalagon the Black) is described as not being hot enough to melt the One Ring; however, four of the Dwarven Rings are consumed by Dragon-fire.

Personality: Elundar is cold and heartless. When you're big enough to make dragons cower. Then everything else seems like worms, and worms don't belong in his treasure. Though that's if he could find them anyways. 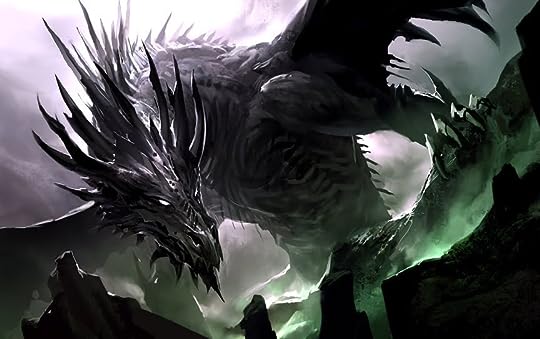 Scales: Black
Eyes: Yellow-white
Height: At least the size of acgonlia the black.
Weight: Too much.

Backstory: Elundar like acgnolia grew up to be a huge dragon. Esily blocking the sun from the smaller beings below him. Although Acgnolia was called to battle, Elundar had not been ready for such battle yet, and was left behind. As the rest of the possibly dragons had lost the will to fight in the wars, Elundar kept his loyalties to Melkor and eventually Sauron, but he has been sleeping for many years recently. Waiting to be stirred from his slumber for his next command.

[Personality:] Meyanna is suspicious and guarded, but, having never had a male interested in her because of her lack of wings, has a soft desperation regarding male dragons. Very suspicious, she despises most to all humans, because of the loss of her wings and her abuse. Whenever she sees them, she feels a mixture of disgust, and despite her size, fear, like she’s scared of spiders. However, despite her fear, she must be a dragon, and is very insistent on not showing it. Therefore, she keeps away from either side of the battle, as both involve humans of some sort. 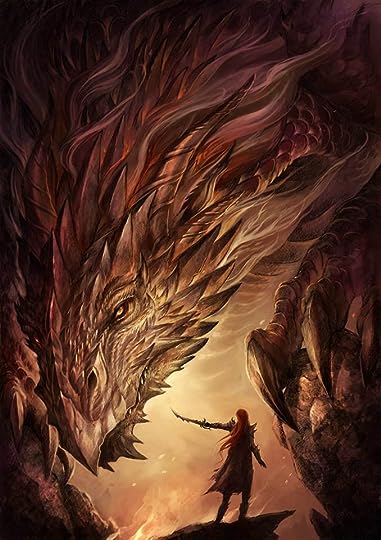 Scales: Red-brown
Eyes: Fire-Gold
Weight: Ask a lady? How dare you!
Height: See pic for reference. Pretty darn big.
Distinguished Markings (If any): Scars on her back where her wings were cut off when she was a baby. In this case, a downed dragon was not a dead dragon.

[Backstory:] Meyanna was a single egg from her young parents. When she was born, the young parents had no real nest, no safe haven. They foolishly had their child near the start of Gondor. Finding the baby dragon, the humans cut off her wings and played with her with swords, taunting and stabbing at her. Having never had a dragon attack them before, they were easily defeated when Meyanna’s parents heard their child’s cries and destroyed everyone around their child. Unwilling to give her up for dead, they tended to her and flew her around until she was too big, and finally left her alone to grow up. She’s kept herself isolated in Mordor. Meyanna grew up feasting on sheep from nearby provinces.