Of corse. So whats the plot?

reply | flag *
message 3: by [deleted user] (new)
Jun 08, 2013 04:59PM
Thank you! I'm not sure, quite yet.
I do not enjoy supernatural. Anything with any of the following is not my cup of tea:
-Werewolves
-Angels
-Vampires
-Demons
But other fantasy matters are alright. However, I do prefer real life. If that's alright. Although you may choose.
Action or no?

Yeah lets do real life i have never done a 1x1 with that plot before. I like a bit of action. We could incorporate a fantasy into a real life situation like for example cinderella. A girl could be living with her two step sisters an stepmother and she has to work for them and the guy could be a hottie she has had a crush on forever and so on. But we could use other stories like snow white or beauty and the beast or we can just do normal everyday life. What do you think?

we don't have to do the fairy-tale thing if you don't want to I was just suggesting.

ok dokay then. thanks by the way I have never come up with an idea other people normally do it for me. change for both of us. so are you making the girl?

yep I will make the guy.

don't worry I was just checking. will post my carrie in a sec 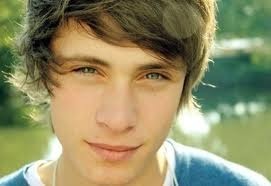 personality: he is nice, caring and selfless. he feels that people use him for his wealth and that no one really understands him. his father is often caught up in work these days and Izaak never really sees him. he was very close to his mother but she died a few years ago in childbirth with Izaak's baby sister. Izaak and his dad both feel the affects of his mother's death and now Izaak tends to be a bit more quiet and shy than he was before.

So, over all. A brief explanation of Aldara's personality... In social gatherings, Aldara doesn't start a conversation, but isn't altogether awkward in one, either. She keeps out of trouble, but loves a good prank. She is incredibly kind, and would do anything for any of her sisters. She is compassionate. She is witty and brilliant, with a very artistic touch in everything she does. She loves to explore, and is unnaturally brave. She has earned the title "geek" and takes that as a complement.

((Haha, don't think about it. I wrote it a while ago for an advanced roleplay. I was just waaay too lazy to write something out.))

((And that's cut down.. She's two parts when everything is typed out.))

((Haha, I didn't want to seem pretentious or anything. >.< So you start? The night of the party perhaps? Maybe he's getting ready for it?))

((Haha, I didn't want to seem pretentious or anything. >.< So you start? The night of the party perhaps? Maybe he's getting ready for it?))

((I thought this was modern day. >.<
Is it not? I was thinking just a normal high school party. Sorry for being so judgemental...>.<))

((Ssssoooooooo so sorry I shall start again!))

Izaak put on a t-shirt and a pair of jeans, he couldn't believe he had agreed to go to the party with Rowan. He wasn't the one for big appearances but Rowan had told everyone that he would be there and if he didn't go he wouldn't hear the end of it at school on Monday.

Aldara stared at herself in the mirror, brushing down the outfit she'd picked out for the party, her fingers skidding across her perfectly carved curves. She was petite, maybe getting a wee bit too skinny from being underfed. They were poor after all.
She was wearing a nice pair of white short shorts that weren't too short but still showed off her long legs and a tank topped blouse in a pale rosy colour that perfectly matched the headband over her long silky brown hair and her studded black flats. She looked casual indeed, yet undeniably fabulous.
Still, Aldara wasn't entirely sure why she was going to a party. She did not like parties, to say the least. In fact, she detested parties, possibly more than anything. Aldara, however, did need new ideas for her novel, and there was no better source than people watching. It helped her carve believable characters. She was invited, being the official "nerd" of the school, and she believed that she was only invited for comic entertainment. Meaning that she would be brutally teased for others enjoyment. Readying her wits and her confidence, Aldara bid farewell to her sister and left for the party, which was just down the block.
Soon she arrived, stepping tentatively into the already busy house. She was not noticed at first, as she slunk through the crowd to a dark corner.

((cute! this is what Izaak is wearing)) 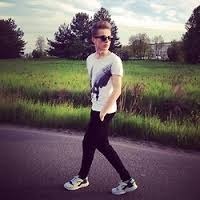 Izzak walked into the party, Rowan right on his tail, and was straight away greeted by a group of guys and their girlfriends. he said hello back but his eyes had fallen on a beautiful girl sitting by herself in the corner of the room. she was writing in a book and seemed to be observing the party scene that was unfolding. Rowan pushed him further into the house greeting yet more people but Izaak's thought were still with the mysterious girl in the front room.

Aldara pulled out her notepad and her eyes skimmed across the crowd, waiting for an interesting character. She had also opened up her laptop, adding to her novel momentarily. The air was thick and smelled of alcohol, something Aldara wrinkled her nose at distastefully.

Rowan thrust a beer into Izaak's hands but he gave it back, he hated the taste of alcohol. he excused himself from all the people he had been talking to saying he needed some fresh air but he walked back into the front room to find the girl, who was now on her laptop. he stood there for a while, hoping she wouldn't see him, but watching her closely; intrigued by her strange but stunning character.

Aldara pulled her laptop closer to her, not listening to anything anymore or looking up at all as she slipped her headphones on and began writing more. Her fingers flew across the keyboard as a burst of inspiration hit her. Her eyes lit up.
After three minutes or so of intense writing, Aldara looked up for a brief moment, and was startled to find that she had attracted the attention of a man. So startled, in fact, that she jumped a little and her head phones fell off.
"Geesh." She muttered to herself. "Don't just stand there. What do you want?" Immediately she had her guard up for someone who wanted to hurt her as she closed her laptop and looked up at him.

"sorry" Izaak said hurriedly "I didn't mean to startle you" he walked over closer to her.

Aldara awkwardly made more space for him on the small couch she was sitting on, tucking her laptop back into her bag. "It's alright." She assured him with a small smile. She bit her lip, awkwardly drumming her fingers on her thighs. She was never good at social engagements, and today was no exception.

Aldara awkwardly made more space for him on the small couch she was sitting on, tucking her laptop back into her bag. "It's alright." She assured him with a small smile. She bit her lip, awkwardly drumming her fingers on her thighs. She was never good at social engagements, and today was no exception.

Izaak sat down next to the girl "I'm Izaak" he said keeping his voice low so to not attract any unwanted attention from any other party goers.

reply | flag *
message 33: by [deleted user] (new)
Jun 08, 2013 09:02PM
"Oh. Um...nice to meet you." Was she supposed to know that name? She didn't keep up with the social status of anyone. It was always just her little world. "I'm Aldara." She smiled little broader and brushed a strand of hair behind her ear, out of her eye so her brilliant blue eyes were exposed. She blushed a little.

Izzak smiled back at her, she didn't seem to know who he was and that made him like her even more. "what were you writing?" he asked gesturing to the laptop. he moved back a little on the couch seeing her uncomfortableness hoping she would not take it affectively.

"A party is an odd place to write a story." he said with a little laugh "And stop being so modest; I am sure it is amazing" he smiled at her.

reply | flag *
message 37: by [deleted user] (new)
Jun 09, 2013 07:39AM
Adara frowned. "Not so much. I get inspired by the way people talk and move, their little quirks. Stuff like that can only be written by observing." She gestured around her. "Thus, here I am, observing and not interfering." She looked back at him and scowled, leaning against the back of the couch. They were just inches away. Their shoulders nearly brushed, but Aldara thought very little of it. "And you don't know me," she added, in regards to his last statement. "You have not read it, or any of my writing for that matter. You can not make that assumption on any grounds." She snorted, not wanting to be praised. She was odd that way. She found it impossible to take a compliment.
She then smiled briefly at him. "So, why are you here?"

"I have no idea. Drinking the night away is really not my ideal night out but long storey short my friend told me that I just had to come." Izaak rolled his eyes. Rowan was like his brother but his personality definitely fit the more cocky, confident guy Izaak had been before his mother's death.

reply | flag *
message 39: by [deleted user] (new)
Jun 10, 2013 06:58PM
"Oh." Aldara shrugged. She wasn't much for social status or anything of the sort so she just leaned back and sighed a little. "I guess you already know my story." She giggled slightly, for the first time really looking at him. He had the most striking blue eyes....When she met his gaze she shuddered and stared at her lap.

"so... what's the story about?" he asked, pretending not to notice her shudder, but loving the fact that he could make her react like that.