I'll rp nearly anything
do you have any ideas?

Type(ex: half breed between vampire and shapeshifter 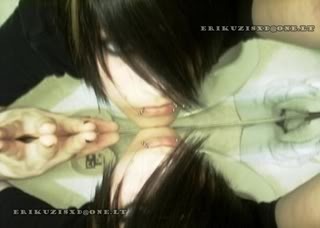 Personality: ((im making a paragraph how he is))
When people first meet him they think his a girl with short hair. When he first meet people his very very shy and doesn't want to talk or even keep eye contact with them. When he does make friends he never completely open up nor say a lot about himself. He likes to keep to himself. his a very talent guy and smart but, tries to hide that.

History: His past wasnt happy at all. His mom was a vampire a very beatiful one at that. She wasn't like the others she could control her hungry around human and animal. And his dad was a shapeshifter. When they first meet they had no idea how to act towards each other. Each other was taught other species are the wrost and don't trust each other. When they finally in love each other. Their love was very secret like there family and friends didn't even know about their other partner.

When they had Achillies he was one special child. His species wasn't normal. They weren't ready or knew they could have a child. Hey came out with red eyes.

When he turned 10 years old he still haven't turn into animal like a shapshifter and nor did he have a vampire weakness nor powers. The only thing they notice was his eyes turned icy blue eyes so bright that it looks abnormal.

Around the age 14 a few of each side of the parents side found out the marriage and child. Sadly they haven't told thier son about there species nothing at all.

Somehow shapeshifter and vampire attack them at the same time. Achillies was sleep and wake up with noise and screaming. He got up and ran and saw the fight. His eyes turned red and his eyes widen. He scream super loud for them to stop. They did and look at him. They where shaken up.

Achillies became a adnormal large black wolf but, with bright bloody red eyes. They stop fighting not knowing what to do. Achillies was looking around noticing something was wrong but, was purely upset on what he saw. when his parents try to calm him down. He snap and killed them both with not wanting too.

When after hours pass he realize what happen and was scared of himself. Blood was all over the wall guts, body parts, and bones all over the house. He black out. Ever since that nite he doesn't remember nothing about who he is or where he came from. He just knew he was different.

Crush/ Relationship: none to scared to be close to people

Other: his gay and doesn't know it

Power: stregnth, agility, and whatever he see once he sees like extreme sport he can do it

Here is the link: http://media.photobucket.com/user/ERI...

Ok, I'll make mine a guy, then