Mod
Fellow Pickwickians, place your observations on anything through Chapter 37 here:

Mod
I am running a week or so behind, because I was out of town for a week to attend a funeral. We have some leeway in the schedule before we begin novel the third, so I would like to encourage anyone who has fallen behind that he or she has plenty of time to catch up.

Well, then let's get started, my dear fellow Pickwickians:

On coincidences that are hard to take

Jonathan suggested we should name some more coincidences that the narrator comes up with and that may be found difficult to swallow by the kind-hearted reader. Here is one that really tops everything in my opinion: In chapter 33, the setting is the countryside, Oliver, on one of his usual errands for his benefactors, bumps into Monks, who happens to be there for no apparent reason other than being bumped into, and sends him into an epileptic fit. At this point, the story is rather threadbare, so much so that I as a reader felt slightly annoyed. However, the Imitable makes up for this failure when Fagin and Monks spy on Oliver through the window and disappear again without leaving any trace behind. This bordering on the supernatural may offend those readers who expect strict verisimilitude from an author, but for my money I liked it as it underscored the devilishness of Fagin, still demonizing him through the eyes of a child.

On the origins of crime and Oliver's goody-two-shoeishness

Whereas Oliver may seem unreal with regard to his innate goodness and the fact that his experiences in as a parochial pauper and as an involuntary member of Fagin's gang do not taint him a bit, yet Dickens seems to be aware of the problem when he has Rose say the following words:

"But even if he has been wicked [...] think how young he is; think that he may never have known a mother's love, or the comfort of a home; that ill-usage and blows, or the want of bread, may have driven him to herd with menb who have forced him into guilt. Aunt, dear aunt, for mercy's sake, think of this, before you let them drag this sick child to a prison, which in any case must be the grave of all his chances of amendment. Oh! as you love me, and know that I have never felt the want of parents in your goodness and affection, but that I might have done so, and might have been equally helpless and unprotected with this poor child, have pity upon him before it is too late!"

This is said in Chapter 30, and it contrasts with what the surgeon says a few lines earlier: "Vice [...] takes up her abode in many temples; and who can say that a fair outside shall not enshrine her?"

Whereas the surgeon's words, partly with the help of their Personification, seem rather to imply a more deterministic interpretation of a person's inclination to crime, Rose (and through her, the author???) points out that a young person, for the lack of love, comfort and proper guidance, may also be willing to learn from whatever bad company he may fall into. We might even see a foreshadowing of Bleakhouse's Jo in these words.

Jonathan, you said something about the Dodger being the only person who introduces Oliver as "my friend", but unfortunately I am not able to locate your comment.

That's a very interesting idea, which - were it not for Oliver's Oliverishness (i.e. his immaculateness) - would also support Rose's line of argument. Thanks for pointing that one out! 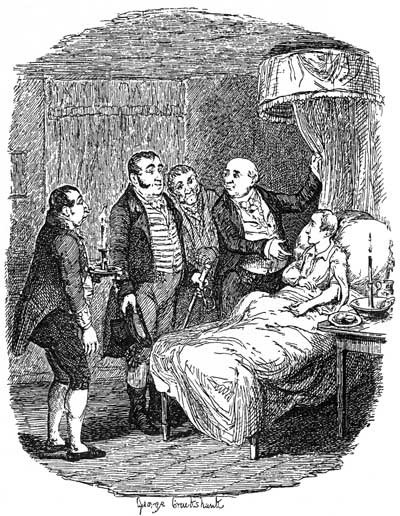 Oliver waited on by the Bow Street Runners 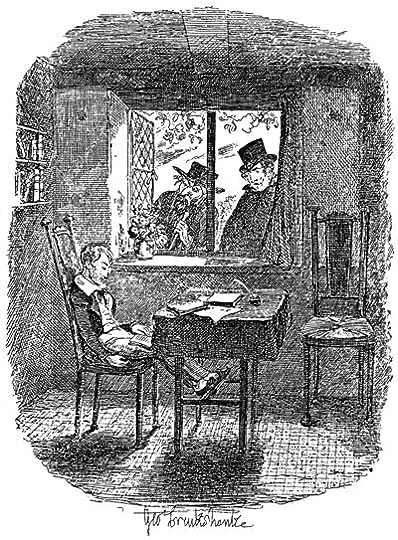 Monks and the Jew 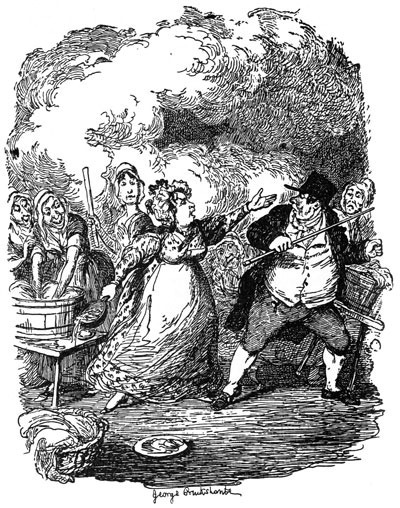 Mr. Bumble degraded in the eyes of the Paupers