Everyone has big plans for camp this year. Let's all keep a diary of what fun things we have actually done.

When you have accomplished a task, confess it here.

Use only this thread for reporting and edit it each time a new book has been read.

Once you have set up your reporting comment, you can link to it by clicking on your name.

and his name is M.R. James. He wrote Collected Ghost Stories which may have been considered good in his day. I thought they were creepy, but they never had a resolution or an explanation. Like: "This guy had a terrified look on his face, and it creeped me out, I wonder what he saw. The End" What kind of lame ghost/Campfire Story is that?
368 pg
12 points


Anyway, then these squabbling kids in Home Sweet Homicide tried to help their Mom, who was a mystery novelist, get publicity by trying to solve the murder of a next door neighbor.. Their mother didn't know what they were doing, but between picking on each other and avoiding chores, they were stealing clues for themselves and not telling the police what they found. They broke the law a lot, I think they even deliberately set a house on fire. If my Mom found out that I was doing something like that she would probably tan my hide! But it would be fun to solve a mystery. :)
220 pg
10 points

For my camp Arts and Crafts project I found some recipes in Scent to Her Grave. These aren't the usual S'Mores, Banana Boats or Praline Cheese Cake recipes. (I hope the mess hall opens soon!) These are aromatherapy recipes, with floral oils and herbs and crystals and junk like that. I'd like to make the one for sweet dreaming. So India Ink...what kinda name is that? So anyway India Ink tells this story about a stuck up beauty queen, her enemies and secret life. Sorta reminds me of Lydia in school. Remember her? The one who stole my boyfriend? B**tch. Murder soon to follow. Oh, never mind!
272 pg
11 points

I went to Earth Lore today to get essential oils so I could make the Lite Dream Oil recipe. The recipe calls for six different oils, many of which were not available. At $8.95 a bottle, the measly allowance I get wouldn't stretch that far anyway. I did make an apple oil and cinnamon oil concoction. And I used a miniature Godiva chocolate liqueur bottle from the S'Mores Martini that I sipped the other night, and a little tiny bottle to carry with me. Here, I'll tuck a picture of them inside. The US quarter is there to give you an idea of size. 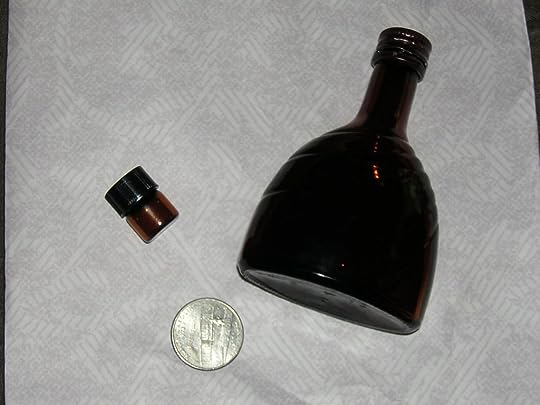 Last night I read a scary book after lights-out, so I had to read under the covers by flashlight. I can hardly wait to tell The Church Of Dead Girls as a Campfire Story tonight around the fire. Boy will everyone be scared!
448 pg
14 points

Today I read about three childhood friends who lived near Mystic River, and although they had a bond among them, when they grew up their lives were really different from one another's life. One became a policeman, one became a criminal, and one was rather ordinary outwardly, but had some mental problems created by his childhood. A movie was made about these guys, but it ended differently. In the book the policeman knows that his criminal friend did something bad, but he can't prove it and will continue to try even after the story is over. In the movie, the policeman knows about his friend's crime, but lets him get away with it, and happily goes to a parade with his friend and his family. I liked the book ending better.
416 pg
22 points

Today I read the diary of a woman who called herself Moll Flanders to hide her real name of Mary. Just like my Camp Nickname is Chris Cross.☻ I know I shouldn't read someone else's diary, and this one in particular was banned from other people's reading of it. Moll had to do a lot of immoral things to keep herself fed and clothed in a time when women had very little rights without a husband. I'm glad things will be different for me when I grow up. Oh I just found out that a man,Daniel Defoe, actually wrote this book! He must have been a really nasty fellow.
Shhh!!! Here comes somebody, I'm hiding the book under the mattress. Don't tell.
339 pg
12 points 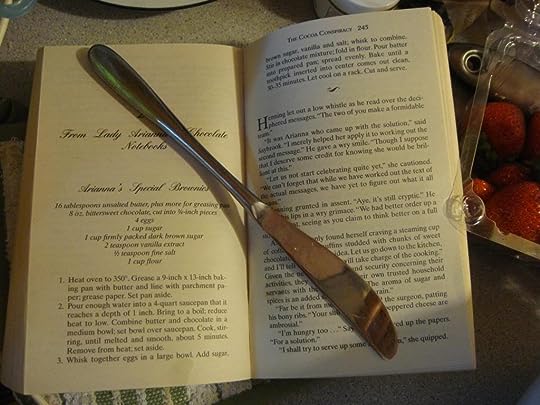 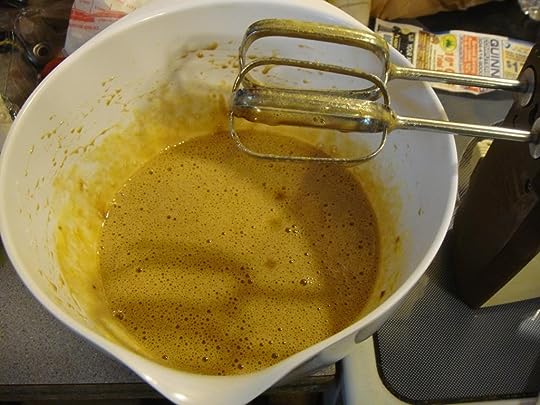 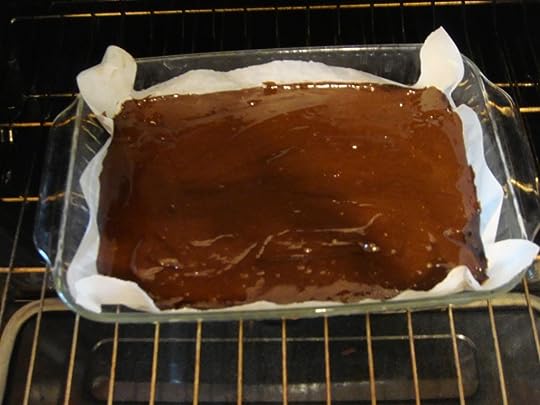 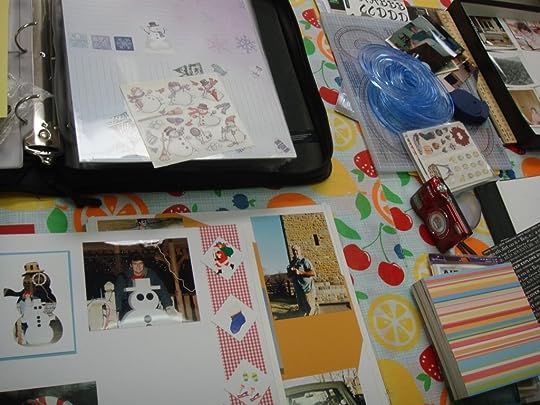 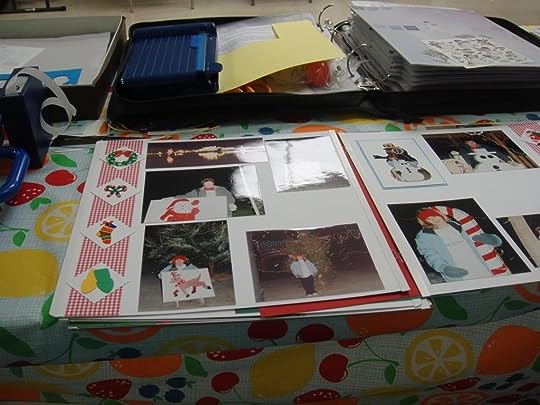 Death Waxed Over
Arts and Crafts = 10 pts + 10 pts for candleholder
The book had tips at the end for candleholders. This is a plain glass with ribbon glued to it. For outdoor use, I have citronella tea lights, and small votives for indoor. 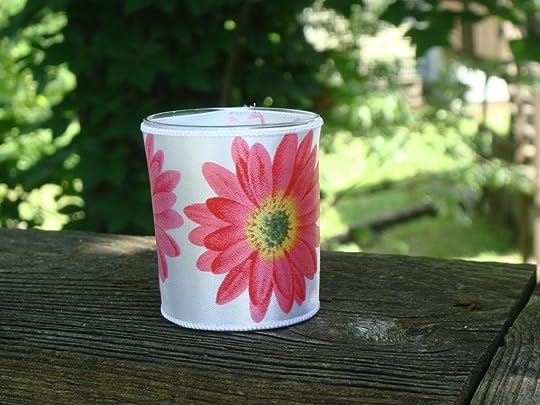 Charlotte's Letters from Camp Jingalo (aka: What I did on my Summer Vacation)

And this is what I did at camp this week...

Task: The License Plate Game: I would like to visit Ireland. The Misremembered Man
10 pts + 1 extra point for 307 pages.

2. The Codex for the task Read a book set in a place you’ve never been, but would like to visit on vacation (set in Honduras - not so sure about wanting to go there after reading the book)- 404 pages. 12 points


License Plate Game
Murder Under the Microscope
10 points for task

12 points for this book

editing this post because I just finished The Mist

11 points for this book

extra points: I didn't see the movie the mist but this is the scene I think they would mess up
(view spoiler)[ there is a part in the book where a young worker for the market wants to venture into the mist because the generator is clogged and he thinks he will be right outside the door for a minute-unclog whatever is blocking the generator and get back in the store. of course our hero tries to convince him not to go out there but the young guy won't listen. The storage door is partially opened and before he can do much of anything slithering pink tentacles emerge from the mist and wrap themselves around the young man. the tentacles are sucking the life out of him while at the same time trying to drag him completely out into the mist. he's holding on to the door for dear life and our hero tries to help him but in the end the tentacles are too strong- our hero can't hold onto the guy and the guy loses his grip on the door and is dragged into the mist.

I think the moviegoer should only get a glimpse at what is attacking the guy because I think it's more scary/suspenseful to let one's imagination take over as to what is happening- the focus should be on the desperate attempt to pull the kid back into the store- and ultimately losing to some scary unknown thing in the creepy mist. (hide spoiler)]

hopefully 33 points in total if my extra points count :)

Somehow I missed this whole thread for the entire week! I only got two books read because it was a god-awful crazy week!
I read

for arts and crafts but I never got the recipe made let alone a picture of it. but here's my review anyway:http://www.goodreads.com/review/show/...
I read for movie night:

which I thought was fabulous. here's my review: http://www.goodreads.com/review/show/...
And I just finished

which I haven't reviewed yet but I will be giving it 4 or 5 stars - I really enjoyed it.
Sorry I couldn't have read more, I had some good books in line to read but it was just one of those weeks!

Fairlee, you took on a big challenge with your book.

But you had fun, right?

See you at the next Toppler.:)

Ann wrote: "Somehow I missed this whole thread for the entire week! I only got two books read because it was a god-awful crazy week!
I read

for arts and crafts but I never g..."

Hey, everyone give me some time to re-add the point count. I'm not sure it is correct now that everyone is updating their diaries.

Almeta wrote: "Ann wrote: "Somehow I missed this whole thread for the entire week! I only got two books read because it was a god-awful crazy week!
I read

Plus 3 points for pages

Don't give it a second thought. That's a huge book, even for a week. I just hope you enjoyed yourself at camp!

for the arts and crafts book. I intended to read another book on the plane, but I slept off and on and ate for 19 hours (10 of which I could have been reading)!

I didn't even get a chance to cook a meal like I had planned and take a pic. Sorry to be a lame camper, but I guess it wasn't a great idea to go to camp the week before flying back "home" for the summer! :)

Hope everyone had fun at camp!

Well, it's not like you had anything else to do... :) Don't feel bad, any contribution is welcome. And the whole idea was to have fun! If you had fun, then you had a seccessful Toppler!

jaxnsmom wrote: "Well, it's not like you had anything else to do... :) Don't feel bad, any contribution is welcome. And the whole idea was to have fun! If you had fun, then you had a seccessful Toppler!"

Yes... i had fun. I always have fun trying to get involved in these challenges. I love this group of readers and how you guys make it fun! I aim to be a better camper (participant) next time! :) 2AM here in jersey (2Pm tomorrow my Malaysian time) so I'm off to bed! :)

...and just a note about the candles... that's great. I think i'll make some of those for citronella candles when I get back in the fall. I will buy the ribbon here! Wonderful idea! :)

The hardest part about the candles - finding glasses that are straight and not curved or angled.

Charlotte wrote: "Charlotte's Letters from Camp Jingalo (aka: What I did on my Summer Vacation)"

I finished Light A Penny Candle during the toppler, so I have 10 points (Place I'd like to visit) plus 4 extra points for length (582 pages in my edition). So that's 14 points. Not too bad considering I was on vacation sightseeing in D.C. most of the week! The 2nd book I read wound up not meeting any of the categories, but I enjoyed it anyway! Summer Melody

I have got to figure out how to post my links/pictures to this page. I wanted to do the talent show and scavanger hunt, but didn't have time to learn how to use the new photobucket account I made before my vacation. It's tough to live for 5 days without my laptop!

Charlotte wrote: "I have got to figure out how to post my links/pictures to this page. I wanted to do the talent show and scavanger hunt, but didn't have time to learn how to use the new photobucket account I made ..."
Charlotte, let me know if I can help. Would love to see your photos!