Mod
Austen's last finished novel, Persuasion, is her most melancholic work (if that's a proper term) reflecting possibly her more mature years of work and life. 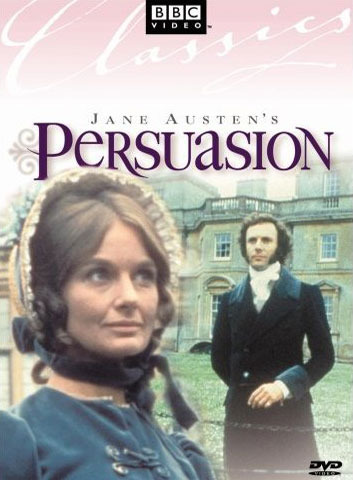 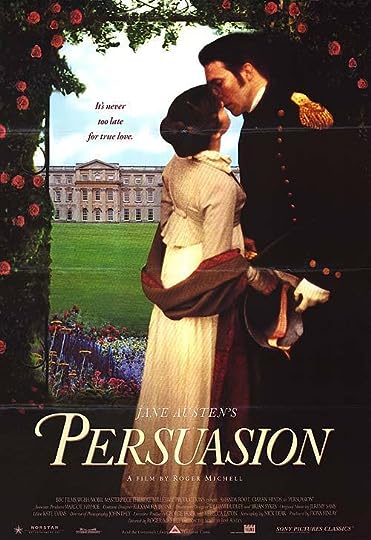 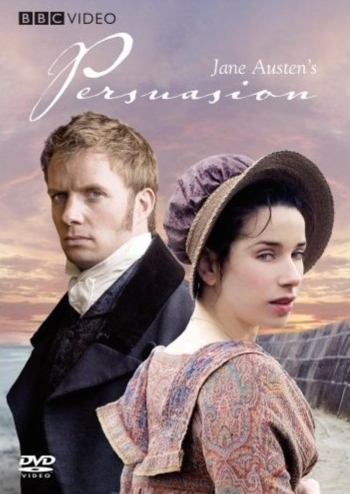 With this book we will conclude the cycle of her works in comparison with adaptations - wow how time flies! Next month we will move on to the books written by her fans. I targeted Karen Joy Fowler with The Jane Austen Book Club and Shannon Hale with Austenland, because there were films made from them, but of course you may read some other fiction related to Austen's opus, such as those including some zombies and sea monsters :)

Good choices for fan fiction! I liked both books.

This is my favourite Jane Austen novel and you are right Zeljka it is more mature read.

Anne Eliot relationship with her family and beau Captain W is emotional. Well emotional for one that it appeals to. It certainly unfair how her family treated her. I became so attached to her, so anyone who treats her unfairly, I immediately disliked them [erhem with a passion].

I like the relationship between the Crofts. They are just sweethearts who looked after themselves. awwwww :D.

I just like the imagery in the novel. I felt the sea breeze at Lyme and I could hear the people in the streets of Bath. Jane Austen is really good in creating scenery.

Persuasion 1971 is one of the best film adaptation I have seen for any Jane Austen novel. I feel like the producer took the novel and just dumped into the movie. Yes, what I just said did not make any sense, lol. The characters in the novel are so easy to identity in this film.

For the 1995 and 2007 version were just 'ok' to me. I like the small mannerism of Captain Wentworth in the 2007 version: the frown, the smile, that comes and goes so easy. For the 1995 version, Anne emotional heart attack is so obvious.

I think by now, you must realize that I have a bias for the book, haha.

Mod
Marren wrote: "This is my favourite Jane Austen novel and you are right Zeljka it is more mature read.

Anne Eliot relationship with her family and beau Captain W is emotional. Well emotional for one that it appe..."

Great post, Marren. I've read this novel so long time ago I can hardly wait to read it again, because there was something really beautiful in it that haunted me pretty long after I've read it.

I've seen both 1995 and 2007 versions pretty recently, and I liked the latter more. It was way less morose, and for my taste, I must admit, Penry-Jones was quite handsome Captain Wentworth :)

Mod
Lol, I got ahead of myself and read this at the beginning of last month, so I have to go back and remember what I thought about each version. The book was ok, not fabulous, not horrible. It's like the precursor to The Notebook, in that there's the whole waiting for nearly a decade before getting back together. I hope I don't step on anyone's toes, but who honestly holds onto a lost relationship that long? It sounds romantic in theory, but a lot happens in a few MONTHS, let alone a few YEARS.

Zeljka wrote: "Marren wrote: "This is my favourite Jane Austen novel and you are right Zeljka it is more mature read.

Anne Eliot relationship with her family and beau Captain W is emotional. Well emotional for o..."

Oh he is handsome :P

Alana wrote: "Lol, I got ahead of myself and read this at the beginning of last month, so I have to go back and remember what I thought about each version. The book was ok, not fabulous, not horrible. It's like ..."


That can sure happen Alana, in her case she got a happy ending. I guess she held on because she was the one who let him go in spite of the fact that she loved him and he did nothing wrong.

i am really enjoying this read. Jane Austen really knows how to make annoying character's annoying - Mary Musgrove is right in step with those other dreadful characters from S&S, P&P, Emma, and Mansfield Park. I do not understand what is up with Mrs. Clay --- she has her eyes on Mr. Elliot, but it seems something else is going on with her...ideas?

I too have also wondered what Mrs Clay's role in the novel is sopposed to mean especially the end Any Ideas?

*PLEASE DO NOT READ IF YOU HAVE NOT READ THE NOVEL*

I cannot figure how to do that spoiler thing :)

Oh girl yes, Mary is soooo annoying, she complains about how sick she is when she is not so bad. I think complaining makes her sick, hehe.

Mrs Clay is like the opportunist she is trying to see where she can get a gentleman to take care of her after her hussie died. So she latched unto Sir Walter. This is what Austen said about her:

"Mrs Clay affections had overpowered her interest, and she had sacrificed, for the young man's sake, the possibility of scheming longer for Sir Walter. She has abilities, however, as well as affections; and it is now a doubtful point whether his cunning, or hers, may finally carry the day; whether, after preventing her from being the wife of Sir Walter, he may not be wheedled and caressed at last into making her the wife of Sir William."

Marren thanks for the quote - it helps.. Now I am wondering about the title of this book and its significance between Anne and Captain Wentworth. She was persuaded by other not to marry, and then persuaded that he liked one or other of the Musgrove sisters....but in the end what is JA trying to say - that we should not let others influence us on matters of love?

Also I am wondering whatever became of Elizabeth Elliot ....

I agree with your stance on Jane Austen's nudging us that we should not let others influence our love choice IF we know for certain that he/she is the one. Anne was easily persuaded in everything and by everyone. She was persuaded to break a man's heart, she was persuaded that she was the one who always served everyone yet she was always left behind. I think this novel is about independence as well. Yes, in their society reliance on family was the norm but Anne could have spoken out for herself a bit more.

For Elizabeth we can say may IFS: she married, she stayed single. I guess a good sequel would take care of that but I am not really into them.

Mod
I have read Persuasion at last two days ago - and really can say this book was the most contemplative (not sure is it right word to use) of all them. There weren't so many witticisms and satirical sentences as in other novels. Some characters were caricatures for themselves for sure, like Sir Walter, Elizabeth and Mary, but I had impression that the tone of the book was overall more serious than usual. Did you think so too?

Mary Musgrove was really annoying, so obviously self-centered and awful person in general. I really wonder how her husband and his family tolerated her at all. Different times I guess - they were supposed to put up with everything, but it's odd they didn't even bother to try to correct her bad manners. In Austen's world it seems everybody simply had to be outwardly nice to the other people, nevermind how intimately they knew them :/

About Elizabeth Elliot I wondered just the same, somehow I think she remained single, as Austen mentioned in some sentences in first chapters, when women come to certain age they find suitors much harder than before despite their charms. That thing puzzled me a bit, regarding so often mentioned "loss of the bloom" for Anne Elliot - I mean, she was still in her twenties, what was that supposed to mean? Did women of that time - without so much make-up and other modern age stuff that tends to harm our skin today etc - really aged quicker than we do nowadays? Or that was simply prejudice of that time, once they knew your real age they supposed many things they wouldn't at first glance. Sometimes I really wish I know better the history of that time, at least the social one - I hope those Jane Austen biographies will help :)

Mod
I think it's just different social ideas at different times. In our day, we live longer, women have careers and don't start families till their 30s many times, and no one really thinks differently (except in the South, where I would most certainly be an old maid... well, no, if I'd never been married I'd be an old maid... anyhoo) about it. It's just a different era.

Thank goodness it is a different era in this case :).