DORIUM: "On the fields of Trenzalore, at the fall of the Eleventh, when no living creature may speak falsely or fail to give answer, a question will be asked. A question that must never, ever be answered."

The Fall Of The Eleventh Draws Closer With Each Of Our Owns Breaths We Can't Stop It, The Day Is Marked, A Fixed Point In Time, The Eleventh Is Dying ... But There Is Another ...

What will it take to be the 12th Doctor?

It’s the end of another era for Doctor Who, as Matt Smith announced on Saturday that he is to leave the show this Christmas. He will not return for 2014’s Series 8, as fans had previously expected him to, and he now has only two stories – the anniversary special and the 2013 Christmas special – left in his tenure. In four short years, Smith has brought a continuum of excitement, exuberance, sinister darkness and interesting headwear to the role, and he’ll be sorely missed by fans.

Doctor Who wouldn’t be the fifty-year-old institution of a show that it is though without its aspect of change. Smith is merely the eleventh man to fly to the TARDIS, and though mourning has begun in the Whoniverse, speculation has already gripped fans of who the Twelfth Doctor will be.

Matt Smith somewhat broke with tradition when he was cast at the age of 26 to portray a 900-year-old man. Though many doubted that he could handle the role, he’s impressed both fans and critics and achieved what many believed was an impossible task, of following in the footsteps of David Tennant. Thanks to Smith’s eccentric portrayal, the role has never been more open to actors; the days of BBC English have gone for the Doctor, thanks to David Tennant’s faux-cockney twang and Christopher Eccleston’s Mancunian take on the Time Lord (“lots of planets have a north!”), and Moffat has even hinted that the Doctor may regenerate into a woman one day.

Both Idris Elba and Chiwetel Ejiofor being linked with the role – and for the role of Bond in Elba’s case – certainly indicates that the Doctor isn’t limited to being white, and the surprisingly high odds for David Tennant to return really does suggest that fans believe anything can happen.

If there’s one quality that Moffat and co. will be looking for in a potential new lead though, it’s a mercurial streak. The Doctor is an exciting, impulsive, genuinely hilarious and painfully lonely character that’s been unrivalled by any other television personality, past or present, and it though it takes a great actor to portray him, it takes someone with a special charisma. Jon Pertwee may have been in his fifties when he took the role, but he invigorated the character with energetic enthusiasm and an action-man quality; likewise, Tom Baker felt like a true alien, and David Tennant connected so powerfully with his audience because he brought a sense of fun to the character that Christopher Eccleston didn’t, for all the doom and gloom of the Time War.

Whilst surprise bookies’ frontrunner, 35-year-old Rory Kinnear (Skyfall), has both the presence and demeanour to take on the role of a thousand-year-old Gallifreyan, it’s no wonder that Benedict Cumberbatch is a name being touted by fans. Cumberbatch, who’s already worked with Moffat and expressed interest at a long-term role in Who, has earned enthusiasts a-plenty for his masterfully capricious take on Sherlock Holmes; though it may prove more than Doctor Who – something that he can’t exactly film much around – to prize him away from his ever-accumulating admirers in Hollywood, he’s certainly the figure of a Doctor that fans want to see.

Cheaper, easier options may prove to be Ben Whishaw (also of Skyfall), Rafe Spall (Prometheus, Life of Pi), Robert Sheehan (Misfits) or even a certain Hugh Laurie, who’s back in the UK after completing the last series of House.

It might seem unlikely that the BBC will cast anyone other than the archetypal white, middle class British 35-year-old male to play the Doctor, because the world are watching; not only because of the anniversary, but also due to the rising profile of the show overseas. But surely if there’s one thing that Matt Smith has taught us, it’s that anyone can be the Doctor: it doesn’t matter if the lead actor is 26, or if he’s Scottish, shaven-headed, short, hat-wearing or only available for a year. The character of the Doctor boils down to two rather contradictory traits: the years of pain and loss that gives the show its drama and heartbreak, and the otherworldly silliness that appeals to children. It doesn’t matter who it is: as long as he feels like the Doctor, he’s right

Mod
I think Hugh Laurie would be pretty awesome.

Mod
Kristen wrote: "I would probably die from joy if it was like Benedict Cumberbatch"

Isn't he from the Sherlock TV series??

Mod
Yeah, Cumbermatch plays Sherlock. Although he is an awesome Sherlock, I somehow can't see him as the Doctor. That's just me personally.

I have absolutely no idea about Bridget Jones. Have you seen 101 Dalmations? Or A Bit of Fry and Laurie?

I agree, he looks great as sherlock but we've had a Doc like him and Matt was better :P

Mod
OK, so the dude who plays Jasper, one of the two idiot criminals. But if you're still not sure, Google! That's what it's for. ;P

Yeah, exactly. I just don't think he'd be as good for the role or bring something new to it.

LOL I can't even imagine it!

Mod
He's the one with the blonde spiky hair or the thin iditoty one right :P

Nope I'm with Glitchy, no way !

Mod
Yeah, the tall thin one. He's also in Blackadder. 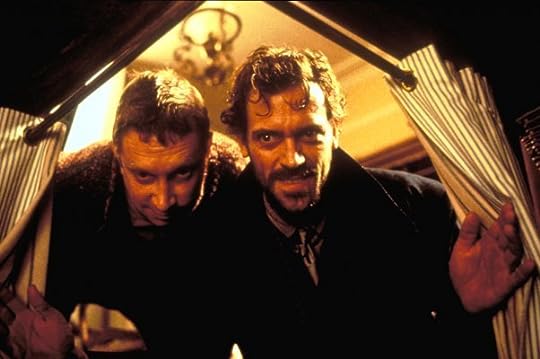 Mod
Hehehe. You deliberately chose a very evil-looking pic of him. :P

It called to me :B

Mod
Because of the evilness present? :P

Mod
... more the twinkle in their eyes that got me :P

Mod
More like the malicious glint. :P Although I have to admit, the other dude, I can't remember his name, does look like he wants to pet them.

Mod
Your kidding, he's like hmmm moneyyyyyy he want to pet the money not the puppies :P

Is it just me or does the other guy look a bit like Arthur Weasley in this shot? Also the dad of Rory !

Mod
He is Arthur Weasley. I can't remember Rory's dad.

Mod
Which episode did we actually see him in? Can you remember?

Mod
Several: power of three, dinosaur one, ummm and another I suppose

I was so confused at this, I was like DrWho is child friendly :O 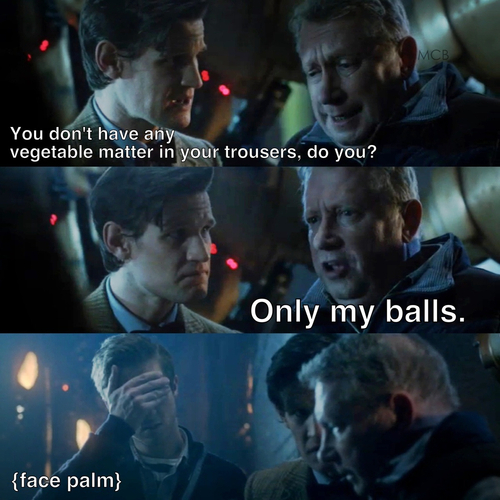 Exactly. It is at its core a show for everyone, especially families and children.

Mod
Yeahh...I was so freaked out, my mouth was :O

Mod
It is evolving though ...wait into what? :P

Mod
Yeah, it is. Who knows? *waggles eyebrows mysteriously*

Mod
(lol ok so probably not the best time then ... how long is a while :P)

Mod
(It would have been like an hour fifteen, an hour and a half if I had remembered to come online when I got back. And then after I forgot I went for a nap. Sorry.)

Mod
(That's ok, I do that too, quite refreshing ... have we ever seen the Doctor really sleep ? Thanks for letting me know, I'll remember to come on when all aren't in school *rolls eyes*)

Mod
(Nope, apart from the episode where they had to distinguish between reality and dream, but then that was an induced sleep. Lol, that's OK. :P)

Mod
I guess not then, being knocked out never really counts does it :P

Benedict Cumberbach!!
I saw this thing on Facebook with three people who it could be. Can't remember who but one was ginger

Mod
Oh I saw he was rumoured to play The Master in the 50th, both himself and Moffat said otehrwise though, John Simm still holds the reign as Master ;)

I saw Rupert Grint, leanardo DiCaprio, Emma Watson and many more ideas posted on FB too ! Was it Rupert Grint you saw? 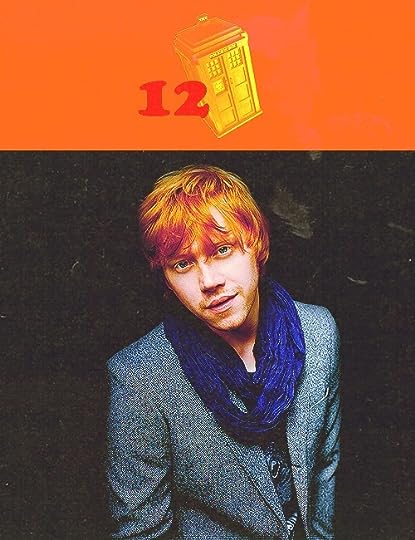 I just tried to search it but couldn't find it. I don't think it was him though

Mod
K Maybe Ed Sheeran - either him or a mystery ginger no one yet knows anything about (could be a fan ;))

Mod
I hold the truth in my words. *wise nodding movements*

This reminds me of dumbledore

Mod
I was thinking of a small comical Yoda.

Mod
The small green pointed eared foe of mine from Star Wars...he is my greatest opponent ... well that and concentration xD