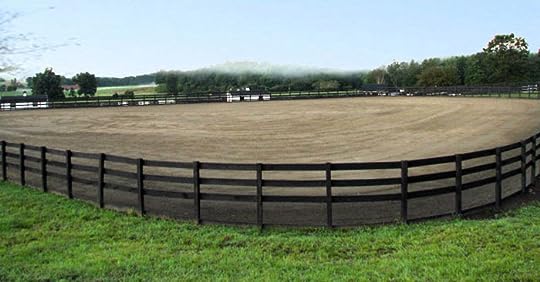 Mod
Aron followed her outside to the outdoor arena, he hadn't said a word after the outburst she had in the stables. It was true,Aron wasn't ready for the real world. Though,he didn't want to be. Truth is,he was a bit scared.She had given him a reality check,and it had gotten him good. He was still in his gear,and he wondered if she had any gear. Maybe he could get her some... Stop it Aron you sound pathetic. You don't need to stoop down to her level. He thought.His sudden thought to himself snapped him back into the real world and he realized they were already inside the arena. He leaned back against the fence before saying "Well go on. Show me how exquisite your riding is."He said,shooing her off with the wave of his hand.

((I didn't see another one, but I created this one. Weird.))

'Once again, I'm not here to show you how wonderful I am, or how excellent Flame really is. I'm here to practice, to become the best. I don't claim to be anything special.' Her voice was still very sweet and innocent as she led the fiery coated gelding into the arena. He stood solemnly as she mounted him, moving into the routine they had been practicing. He moved beautifully, as elegant as some of the expensive, imported arabian horses within the stables. She didn't worry about helmets, or gloves, all that mattered to her was the connection between her and her horse, and to be honest, she knew very well deep down that Flames' movements could easily prove his words infinitively wrong.

Mod
Aron shrugged as he watched her walk away from him and towards the other side of the arena. The rumors that Aron had heard were true,she was amazing. He had heard many things from everybody,but he ceased to believe them unless he saw it himself. Aron didn't want to tell her about the rumors though, he wanted her to believe that he was bad. She seemed quite nice,and he knew that whenever he got close to a girl he would hurt them eventually. Which is why he was always so cruel and mean to people. He didn't want to hurt anybody anymore, so he pushed them away with his words and actions. Though, Scotland looked so graceful when she rode. Aron had always wished that he could be as graceful as some riders, but sadly he lacked swiftness.

Scotland dismounted eventually, leading the red chestnut gelding in. 'That was all him; He's definitely a diamond in the rough.' She didn't mean to brag, or anything, but to her, Flame was her whole world. He didn't leave much room for romance, or a lot of friendships, but Scout didn't mind. 'I'm sorry I was harsh, earlier,' Why did she apologize all the time? Scotland couldn't understand, she just knew she had always been very compassionate.

Mod
Aron snapped out of the trance he had been in,realizing that she was no longer riding but she was right in front of him. When she apologized, he was quite shocked. Though he put on a poker face and didn't let it show. Aron sighed as he ran a hand through his hair. He was going to have to do the right thing,like it or not.
"Actually, you have no reason to apologize. I was in the wrong, you were just being kind towards me."He mumbled.Aron was never good at apologies, so when he did apologize they were often slurs of words or un-comprehendable mumbles.

((I'm pretty sure she'll kill him with all this sweetness and kindness, if she hasn't already ;) ))

Scotland stopped, frozen in complete astoundment at his words. Did he...he...apologize to her? She didn't know how to respond! So, being that she didn't know how to respond in the situation, she became that adorable, shy girl so suddenly, stumbling over her own feet as she led the magnificent gelding towards the middle of the arena, staring at Aron with such intensity it scared her herself. 'Thank you, but you didn't do anything wrong. All of that is water under the bridge.' And with that, a sweet, innocent smile graced her lips as she loosened the girth of Flame's saddle, letting him rest for a few moments.

Mod
(view spoiler)[ Oh yes. Aron's going to go insane and he's going to mumble about a world made of sugar and candy with rainbows everywhere. (hide spoiler)]

Aron suddenly became the guy who he always hid inside,the not so bad one, the one that actually had a heart. He held a hand to the back of his neck nervously as he chuckled softly, a slight grin on his face. "Oh but I did. You cannot deny that I was totally at fault." Aron said as he looked up to face her, his features changing from angry to kind and gentle. He was certainly good at putting up a poker face because if he never showed her this side of him,she would have never known.
"You were quite good too. I mean, you seem very graceful..."He said,his voice trailing off.

'Like I said, it's water under the bridge. If we dwelled on everything that people said to us or have done to us, then we become hard, and cold. I can't say that I really dwell on things for too long, nor do I get very angry, except for when my horse is brought into things.' She said, leaning against the sturdy gelding with a small, kind-hearted smile on her lips. 'Now, if you don't mind I'm going to take Flame in, and then I'll gladly finish brushing out Jack for you.' She offered, kindly. What was she thinking? She must have been crazy to even consider that, but she was such a kind hearted girl, she didn't like to be mean.

"Well then I guess I've dwelled on many things."He mumbled. "As for you dwelling on things, I do not believe you've dwelled on one thing. I don't understand how you can be so kind when people are so malicious."Aron replied with a sigh. This girl had opened his eyes, showed him something he had never seen before. He felt bad, but there was still that small part of him that didn't care.

'I don't think you dwell on things, I think you're truly a nice guy deep down who's covered by this...glamour, and poshness because its all you've ever known.' Scotland replied as she set Flame's saddle and bridle on the fence, letting him roam the arena as she leaned on the fence, watching him. 'I don't know why I'm so compassionate, to be fairly honest. I just...care, its in my nature I suppose.' She said in a murmur, a soft, sweet slightly girlish giggle escaping her lips as Flame chewed on her long ponytail.

Mod
Aron laughed" God.You act like you know everything about me when you really don't. I'm not like this because of money. Hell I'd be like this even if I was dirt poor." He said,the words holding a bit of coldness.He could admit she was adorable and all,but when he got down to it his bad side wasn't very happy with her. He was going to be himself,even when he was being nice. He wasn't as bad as when he was acting rude,but he was still mean when nice.

'I'm just making assumptions.' Scotland defended, completely laid back as she held up her hands in a defective gesture, that innocent smile playing on her lips. Eventually, she'd break that shell, but only if he stuck around long enough, which she doubted. Not that she made time for anyone but her siblings and her horse, of course. 'You know, that's a complete shame because for that milisecond when you were apologizing and being kind, I was actually charmed. It didn't last long though.' With that, Scout attached a leadrope to Flame's reins and led him out of the arena, ending the conversation.

((Maybe she can leave him thinking and such, and we can skip a day or two and meet in the paddocks? :3))

((XD Just because she's all sweet and kind of a pushover doesn't mean that she doesn't have a bit of attitude. Plus, she can't put him in a sweets induced coma without a bit o' sass xD. I'll post in the paddocks))