Mod
We are starting on World War Z: An Oral History of the Zombie War. You may start the discussion below!

I've finished it. Can't help myself but started earlier :)) *kinda "cheating", I know

I think I belong to the minority group on this book. I think it was well written, detailed, and realistic, but then I didn't have interest at all and only skipped and skimmed when I read it :|

I cheated as well haha.

Finished it a few days ago.

Many interesting chapters so I wasn't bored at all.

There are some realistic bits in it, showing the worst possible ways in dealing with 'disasters', lack of preventive measures, miscommunication, cover-ups etc. I love the part where all white-collar jobs become useless and the reorientation programs.

I cried reading about the K9. oh well, always have a soft spot for dogs. Never thought I'd cry reading a zombie novel though ;p

I'm cheating too since I'm still in a reading rut and I don't know how fast I can read. It's okay so far but I think I'd be more interested if the section for each character were a bit longer so we could have time to relate to them better. Right now it feels a bit jumpy.

@Dini: that was exactly how I felt too

Dini wrote: "I'm cheating too since I'm still in a reading rut and I don't know how fast I can read. It's okay so far but I think I'd be more interested if the section for each character were a bit longer so we..."

I am happy with the current pace for each character. It still allows me to pieced the big picture without overly committed into the character that is not in my preference.

It is common for a sci-fi not to dwell to much on the characters, but more on the theme or idea. The characters are just pieces for the author to express the idea behind.

Foe WWZ, the pieces of stories are like puzzle, bit by bit forming the actual account of the "already happened" war. It is about understanding what actually happened, not a story telling in a general sense.

At first i had no interest to read this book. I am not a zombie lover. But later, i said to myself to read something different. So i read it.

The book doesn't disappoint me, after all. Although the stories like a puzzle, and has many characters..geez.I feel like walk in the maze to reach the end. But the stories, successfully, absorbed me.

I don't know, if it's me or what, but when i read first chapter about how the plague spread in China, i imagine the weird zombie that appeared in that lame mandarin zombie movies heheheu (something from my childhood, i guess..watched that weird zombie jump around with a paper stick on its forehead :D)

Well, when i see WWZ's trailer, the one with Brad Pitt in it...i wonder, does hollywood could make the book a good movie, or just simply ruin it.

Namida wrote: "At first i had no interest to read this book. I am not a zombie lover. But later, i said to myself to read something different. So i read it.

The book doesn't disappoint me, after all. Although t..."
I still think that it will make a good movie. Single POV many times builds the immersion and become the 'connecting' tool between the movie and audience.

@Raymond: yea i hope so..cant wait to watch the movie too.

Are we still going to do a nonbar? *smirk*

I don't think it's going to spoil the book reading, considering the Hollywood take on it

Oni wrote: "It is common for a sci-fi not to dwell to much on the characters, but more on the theme or idea. The characters are just pieces for the author to express the idea behind. ..."

I was thinking it'd be better if the interviewer focused on just a limited number of characters and alternate between their points of view. But I do understand the strength of this kind of narrative in giving as many viewpoints about the zombie war from as many parts of the world as possible. That said, though, while I haven't finished the book, I've flipped ahead a bit and was glad to see that the narrative did return to a few of the characters interviewed.

And while some of the politics and military stuff in earlier chapters went over my head, I was happy to see that the author did his homework in researching about Asia in the Korea and Japan sections. As I'm a bit of an Asiaphile, I thought the author did a good job in describing North/South Korea relations and the phenomenon of otaku/hikikomori in Japan, and even mentioning a famous Japanese comedy duo in the footnote. :D

I'm curious about the movie too. I wonder how the movie will translate the book.


Yes, it's definitely gonna be like that ;p
Still want to see the zombies though...I hope they do justice to the battle scenes

They definitely should do Yonkers!

Dini, sorry to disappoint you. I doubt there will be any Battle of Yonkers from the movie. The Battle of Yonkers only works for slow zombie, while from the trailer, they give you super zombie, not just running zombie, but running with inhuman speed. And I guess they will have inhuman strength also. There is no way you can defeat that kind of zombie. Except for Bratt Pitt.

Maybe I still will watch it. But I have given up any hope that it will resemble the book, even just a little bit.

So it's not just zombie war but super zombie war? Maybe Brad Pitt can beat them because he's a vampire (from Interview with the Vampire). LOL

Anyway, if anyone still interested in watching it together let me know.

Dini wrote: "So it's not just zombie war but super zombie war? Maybe Brad Pitt can beat them because he's a vampire (from Interview with the Vampire). LOL"

Think of him as P. Redeker with more muscle and compassion :)

I haven't gotten round to reading this! Would love to watch it together but I'm out of town till end of June >.< But I'll chip in my two cents after reading it.

Silvana wrote: "Anyway, if anyone still interested in watching it together let me know."

I'd still like to watch. I think I missed the date in the last whatsapp conversation, is it gonna be next week?

The date has not been decided yet. Will follow up and update :)

There is an audio book with amazing voice talents from Nathan Filion, Simon Pegg, Alan Alda, Masi Oka and many more.
List of cast: http://en.m.wikipedia.org/wiki/World_...

i LOVEEEE this book!!!!!! haven't watch the movie yet but OH MY GOD i love the Yonker scene so much!still on page 150 but totally sucked into this book! first zombie book i've read,usually i read something lighter like dystopian but oh my...totally worth my time!

I finished the book and liked it better than I thought I would. Glad to have read this with you all :)

Anyone who wants to join please send me a direct message. Thanks!

Some preview before the movie. Don't say I didn't tell you :)
http://movies.yahoo.com/blogs/movie-t...

We'll meet you at Blitz. It's at Audi 8, ask for the ticket with seat F11 or F12. Might not get cell reception at Blitz

Thanks everyone who joined the movie night. Even though the movie strays faaaaaaaarrrr away from the book, we still had fun :D

Oni wrote: "Some preview before the movie. Don't say I didn't tell you :)
http://movies.yahoo.com/blogs/movie-t..."

Marc Forster is officially in my director blacklist. 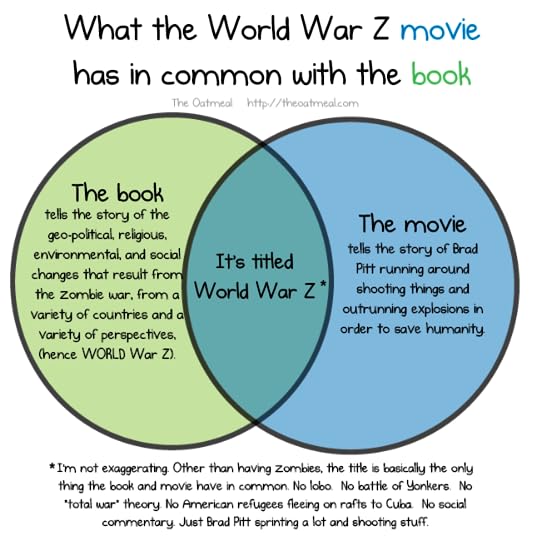 Mod
Don't forget him strutting along in between zombies as if he was in catwalk.
for me it fails for one reason:
NOT ENOUGH JAMES BADGE DALE.
nuff said.

I had a great time last night watching and bashing... er, discussing the movie with you all. :D The conclusion: Brad Pitt is always lucky, and he never dies.

And the zombie is funny..., with the staring eyes, click-clacking teeth.
And from the ending, there might still be a sequel. But they are going to have a hard time to find a title, because there are NO LETTER AFTER Z!

World War Z: An Oral History of the Zombie War (other topics)