This blog post at Tor.com says it all so well.

So twitter exploded. So glad hat all those people were not spoiled. I laugh at those who are mad and refuse to watch anymore. Good riddance. If they thought this would have a happy ending.....

Forgot about the eagle.
Hodor takes a nap.
They mentioned the black gate. I wonder if they will have a helping hand to find it.
Rickon delivers his best lines in 3 seasons and leaves!

Kind of speechless, knew what was coming but still not prepared, it was a well done episode

...and yes, y'all can say "Red Wedding" now without spoiler tags...

Catelyns scream at the end was a let down for me. Loved the episode completely, just felt the actress could have done a little better job portraying her emotions while watching her son die.

I feel my true emotions about talisa shoed in this episode when she was stabbed in the belly and I literally jumped out of my seat yelling "fuck yes!" - today I learned something new, I apparently really hated her made up character 0_o .

I haven't watched the whole episode yet just the Red Wedding scene on Youtube and it was absolutely heartbreaking.


*Secret*Fatty* wrote: "I feel my true emotions about talisa shoed in this episode when she was stabbed in the belly and I literally jumped out of my seat yelling "fuck yes!" - today I learned something new, I apparently really hated her made up character 0_o"

You scare me, Secret Fatty O_o.

*Secret*Fatty* wrote: "Catelyns scream at the end was a let down for me. Loved the episode completely, just felt the actress could have done a little better job portraying her emotions while watching her son die.

Catelyn was perfect in this episode. I guess the final stab made by Roose Bolton left her numb. The way she screamed, pleaded with Walder Frey and Robb for his life was the best acting by anyone this entire season.


And how good was David Bradley as Walder Frey? In ONE episode, he may have eclipsed Joffrey Baratheon and Ramsay Snow as the most despicable bastard on the show.

Saw this on twitter, i realize folks will need something to cheer them up today 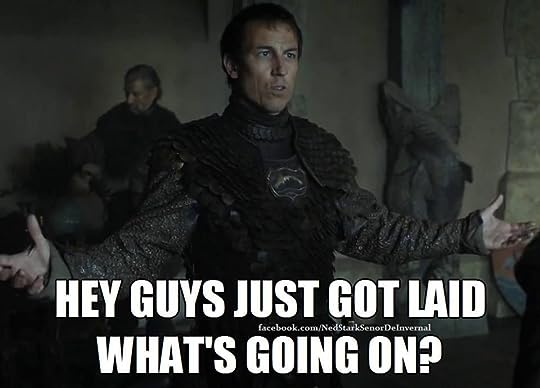 Nermin, I love that.

In the book I didn't care about Robb or his death all that much, (Grey Wind's death just about killed me) but here in the TV show, it hurt like hell to watch him die. Madden has brought Robb alive for me in way that the books never did.
But the overall book Red Wedding was much more devastating to me, it was good here in the TV show, but it lacked something. Or maybe I'm just used to the idea of it and what happened, maybe sitting with it all this time made it less traumatic.

I dunno. As many times as I've read it, and though I knew it was coming, I found myself sucker punched when it did.

I kept hoping that it would end well. David Bradley was excellent. He even lured me into feeling safe, and that bygones were bygones. The betrayal was so convincing and heartwrenching.

This realization has scared me as well ;)

Does anyone remember if in the books Catelyn suspected / clued into what was going to happen like she did in the show when she shared that look with Bolton ? Or was that just some extra heartbreak they added in... I would look it up but I don't have my books right now

Yes, I remember it was the same in the book, too.

This realization has scared me as well ;)"

It's OK, I wasn't a huge fan of Talisa either but I hated when they stabbed her belly over and over again. It was very cruel and it made me cry a lot:(

We may feel like crying, so let's laugh about it instead:

"Why doesn't George R.R. Martin use Twitter?
Because he killed all 140 characters."

Thanks, Chris, this was hilarious:)))

People's reaction to the Red Wedding

"What the fuck is happening?" LOL

But after watching those reactions, I might need to wait awhile. Heh.

They made me want to watch it again, maybe tonight if I have the time.

The wound is still too fresh.

All the better to dig deeper into that wound.
I sound sadistic, masochistic, but I assure you I'm not...much. lol

Yeah, I'm going to watch it now, fuck Longmire, he can wait. hahaha

I watched it again. As awesome as the first time. :) People's reactions were hilarious. I wonder how they will react next week if (view spoiler)[ they show Robb wearing Grey Wind's head. (hide spoiler)]

I haven't read this book yet because I'm getting worried about how long it's taking GRRM to finish up the series. So I have watched this season without having read the book. I just pulled the book off the shelf and moved it to my nightstand.

My first reaction was how sad I was for Arya. She got so close, my heart just broke for her. I didn't care much for Rob's wife (I didn't want to see her die or anything but I wasn't to stressed) but I was really shocked about Rob and Catilyn. I'm really excited to see what this does to the realm.

I want to kill Frey so damn badly. I want him nailed to a rack as his intestines are pulled from him as he screams.

I'd bring him to Ramsay to play with. That would be...interesting to watch.

Ala wrote: "God damn, it hurts.

I want to kill Frey so damn badly. I want him nailed to a rack as his intestines are pulled from him as he screams.

Amen. The fucking Squib. I'd nail his damn cat Mrs. Norris to a fencepost too.

I hope they don't! :S (view spoiler)[AH! there is only so much emotional trauma that we can take in one season, plus I think it would be a little bit gruesome to show on tv... even for HBO, no? That was so degrading to Robb and I hope they don't do that to Richard Madden... anyways its just something that I personally don't need (or want) to see (hide spoiler)]

Speaking of Argus Filch David Bradley, look at the two episodes he's credited for appearing in:

I'd say that if we see his name on a future episode, we'd better get ready for something pretty horrible to happen.

My favorite moment was the silent credits. Powerful stuff.

Silent credits? I remember someone screaming....oh! Wait, was that me? anyway.
I don't know what I have expected but I certainly did not expect to cry like a baby. I didn't cry when I first read the chapter. I was shocked for a while , sure. Like "What.....Wait.....What?! Did this just happen?"

But that was nothing compared to what happened today. I found myself wishing I could just stop it. Close my computer...walk away.

I think my favorite moments of the episode were all Catelyn's moments. *starts sobbing again*

Anybody knows why Rickon was heading to the Last Hearth? I thought he went to Skagos.

Silvana wrote: "Anybody knows why Rickon was heading to the Last Hearth? I thought he went to Skagos."

Well, it is possible they went there because we don't really know where Osha and Rickon are throughout books 3-5. We only find out that they went to Skagos later, which may have happened after they visited the Umbers. Maybe the Umbers helped them flee to Skagos?
Basically, anything could've happened, including the fact that they're not really in Skagos.

It struck me as an heroic bit of writing when I first read it, then for months I wondered how it would be managed on HBO. This morning, my wife told me there was a huge outcry against the gratuitous violence, but compared with the book, it was subtle and tasteful... well, maybe not tasteful, but I can well imagine there are a lot of very unhappy series fans this morning.

When I first read the books, too, I was struck by the intelligence of removing the distraction of the "war" with the Lannisters. ASoIF, was to me, always Jon Snow's and Arya's story. Now HBO will have to really flesh out their characters. My favorite bit of the episode was Arya's face as she saw her countrymen killed only a few yards away and was powerless to do anything to stop it.

I was so busy watching my SO's facial expression (he hasn't read the books) that I almost didn't watch the episode. So Talisa and her plot killing baby are gone, as expected. It's a shame the Robb arc didn't get more screen time until the last two episodes, because it became apparent Madden is actually a pretty decent actor (he's always seemed very wooden to me, but I suppose one can argue that Robb Stark is pretty wooden too).

I was still more upset over Grey Wind. :(

Evilynn wrote: "I was so busy watching my SO's facial expression (he hasn't read the books) that I almost didn't watch the episode. So Talisa and her plot killing baby are gone, as expected. It's a shame the Robb ..." Ohhh... I'd forgotten that nastiness. Thanks so much for depressing me even more!

Richard Madden and Kit Harington are burdened with the same curse. Great actors but the show mostly neglect them in favor of more King's Landing and Dany scenes, plus Robb Stark and Jon Snow aren't really the emoting types. When they let go of their seriousness a bit, they are actually very good. Jon's expression as he stabbed Orell, saying "You were right the whole time" was perfect.

And Robb as he got up and spoke his last word, "Mother". Heartbreaking.

That was the perfect icing on the cake! That way, the Rains of Castamere music-over wouldn't hide the audible sobbing.

I'm in awe of the quality of that episode.