Publisher's Weekly tweeted yesterday that Diana Gabaldon has signed contract with Starz for Outlander movie for 2014. It was announced at Book Expo America.
Thought I share the updated news for the fans.

Wahoo! Thanks for sharing. Bet this revives the Jamie casting thread. :)

Mod
It's going to be a TV series, not a movie. :) (I've been fangirling over it since they first starting talking about it last year.)

They've ordered 16 episodes over 2 seasons, but there's no word on whether that will be Outlander alone or Outlander + Dragonfly in Amber.

Filming is set to start in Scotland in October, so casting shouldn't be too far away. It'll be interesting to see who they

Ron Moore of Battlestar Galactica is the head writer/developer and he spent quite a bit of time going over the books with DG and she's said she thinks the outline he has is good. So hopefully it won't be awful.

Vicky wrote: "It's going to be a TV series, not a movie. :) (I've been fangirling over it since they first starting talking about it last year.)

Damn Vicky! I really wish Goodreads had a thumbs up/like button. Love your fangirl moment and all the Outlander wisdom. So good to hear it will be a series. There is no way that book could fit into a 2 hour movie.

I think he definitely has the eyes...they better make his hair red. :P

Mod
I liked Sam from the beginning, but I think Diana Gabaldon's comments really cement him for the role.

She saw his casting videos which included two scenes. The scene between Dougal and Jamie after Dougal exposes Jamie's scars in the tavern (Chapter 11, Page 189 in my eBook) and the scene where he explains to Claire why he's going to punish her for running off (yes, THAT scene). And this is what she said:

"First five seconds, I’m interested—he looks totally different than he did in _any_ of the stills—and five seconds later, Sam Heughan’s GONE, and so am I. It’s Jamie Fraser, right _there_ in front of me, moving, talking. One of the biggest thrills ever."
Here's the link to the whole post: https://www.facebook.com/AuthorDianaG...

For an author to say that about a character she's lived with for 25 years, it gave me the chills. She is hugely supportive of him. He's Scottish, he's 6'3", he has the right build (according to Diana herself) and he has the presence.

He's also really into it. He read the book before auditioning, is starting a second read and has humbly said that Jamie is "a true gift of a part." He's already engaging with the crazy fangirlsbase on Twitter and I think he's committed to doing the part justice. 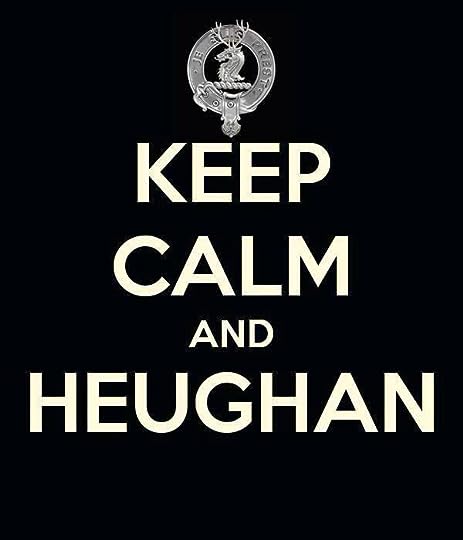 @Vicky, crazy doesn't begin to cover the level of insanity

AHHHHHHH!!! I'm so excited! I haven't seen this guy before, but DG's comments and watching him a bit on youtube...I can see it happening. IF he can get the accent down.

Edit: Just found out he's Scottish, so now I feel like an ass for the accent comment, lol. I shouldn't assume an English accent on youtube makes an English actor!

Mod
Katie wrote: "IF he can get the accent down."

I think he already does ;)
http://unitedvoices.tv/sites/default/...

Vicky wrote: "I liked Sam from the beginning, but I think Diana Gabaldon's comments really cement him for the role.

I had to Google Image him (didn't know who he was) and when I saw a lot of androgynous-ness I got worried... scrolled down saw one rugged picture of him and was like "okay the boy has potential"... then I saw this http://tinyurl.com/kh7rqd2 and said "well damn, look at that!"

Guenevere wrote: "Vicky wrote: "I liked Sam from the beginning, but I think Diana Gabaldon's comments really cement him for the role.

I had to Google Image him (didn't know who he was) and when I saw a lot of andro..."

Stacia ~ Vixen of Variety wrote: "Guenevere wrote: "Vicky wrote: "I liked Sam from the beginning, but I think Diana Gabaldon's comments really cement him for the role.

Yeah, couldn't find the source. That image went straight to Diana's FB but I couldn't find where it originated... but I'm tired and refuse to be tenacious so ehh!

Did you see the new trailer for The Outlander series on Starz? Bookriot posted it.

FYI you can also watch the fan event that aired live on Saturday: http://www.starz.com/originals/outlan...

Whoo! I read the first couple of books recently and loved them--I had no idea until just a couple days ago (thanks to all you VF fans!) that they're making this series. Awesome!

Vicky wrote: "I liked Sam from the beginning, but I think Diana Gabaldon's comments really cement him for the role.

She saw his casting videos which included two scenes. The scene between Dougal and Jamie afte..."

I am so excited about this t.v. series. Sam is soooo cute!!! I hope his hair will be red:) It will be out this summer, right? :) I saw a clip on youtube where Sam teaches us how to pronounce the Gaelic words correctly. (I melted... he radiates charm:)

Here's a list to Starz' playlist of Outlander things: https://www.youtube.com/playlist?list...

The Outlander Disappearance Trailer is the newest (and longest) trailer.

Somehow I missed the Outlander books, just as I missed Game of Thrones, when they came out. A few years back at DragonCon, someone handed me a free book. I put it in my bag and carried on my way. When I sat down to watch the show, I realized that I had read the premise of the story somewhere and went to my bookshelf knowing that the book handed to me, for free, at Dragoncon was that very story. Also like Game of Thrones, I watched the first season/first half season before getting into reading. Besides the story factor, I'm a huge Battlestar Galactica fan, so when I read that Ronald D. Moore was working on it, as well as Bear McCreary composing, I was sold.

I watched the first six episodes and then dove into Outlander, and I'm about 61% (according to my Kindle) through Dragonfly in Amber. I'm going to try and read as much as I can ahead because I am one of those that loves to compare between book and screen. So far, I'm loving the story and I can barely put it down to focus on other things.

I'm glad you like it Mandie, it's my favorite series.

I've read the first four books of the Outlander series, and am now midway through Fiery Cross. They're good, but occasionally stretch credibility. Her premise of time-travel being immutable and unchanged goes against my beliefs; snowball effect and all that. The romance is fun, though.

Actually, I like Game of Thrones better! One reason is that the cast of characters is much larger and more diverse. The stable of actors are thus called upon to perform in greater situations. Gabaldon also tends to hoard her fantasy elements, spoon-feeding them out in baby-size allotments, and that gets old really fast.

I am loving this TVshow so far! Think it really does the book justice.

These books are so addictive! I read them all first in 2012, and I think I've pretty much read them once a year since then....because I just need to spend a month or two in that world. They become so much more rich and fascinating as the story goes on, and I can't even pick a favorite at this point!

I think the show is doing a beautiful job. It takes some creative license to make changes, but most of them aren't major. A few have ticked me off a bit, but I just remember that the show is an entirely different entity from the books. The books haven't changed, the show is it's own thing. The actors have been remarkable; they completely embody the characters and it's easy to love watching it!

I have a question for those that read the book and watch the show. The scenes in the dungeon with Jack Randall and Jamie: was it harder for you to read it, or watch it? Personally, while I found it hard to read, I think it was worse to watch. With the book, it was all in my head and if needed you could skim it or skip it altogether. With the show, you have to see it all in excruciating detail, unless you look away or fast-forward.

What do you think of how they handled these scenes? I like that they didn't downplay it or skip it all together to make it easier to watch or make it less contraversial or whatever. Well, at least up to the point where it ended...

I don't find those types of scenes hard to read, disturbing yes, but I can read them just fine.

The show though, was hard to watch, and the rest of it is going to be worse. I actually watched right up until the scenes started, then paused it for a bit until I felt mentally prepared to watch the rest. I'm thinking I'll have to take a few breaks during the finale.

I think the show is doing an excellent job and Tobias, Cat and Sam are nailing it - it's incredibly powerful stuff they are conveying.

I found it difficult to read, because it made me extremely uncomfortable. Any really graphic rape scene makes me incredibly uncomfortable (Girl With a Dragon Tattoo was almost unbearable), but I found the show a bit...I don't know, easier? Still horrid, but easier to step back in my mind and say, "These actors are doing an amazing job with a very difficult scene," unlike reading the scene in the book, where there is no escape and the characters are more "real" to me.