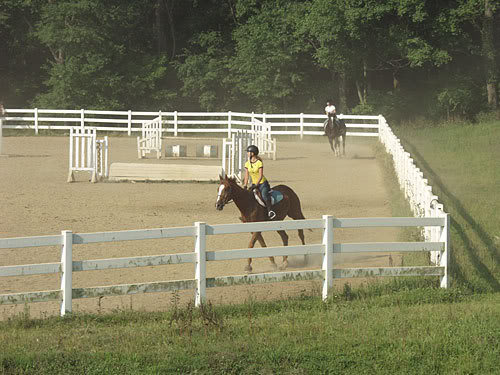 Denver led Fable out of the Stables and into the outdoor ring, dragging Desiree along with him. He handed her a helmet and grinned sheepishly, 'He loves to run, so make sure you hold him back just a little bit. I learned that the hard way.' He said, though he wasn't joking this time. Smoothly, he kissed her cheek and then her forehead in one quick sweep before making his way at a jogging pace to the fence line. Slowly, he climbed over it and onto it, settling on the top bar. 'Go ahead. Lizzie said just the small jumps if you want to jump him, though.' Denver called out to her.

Des thanked him as she took the helmet and placed it over her fiery tresses. She didn't comment on the two kisses he gave her seeing as she was on cloud nine in that moment and didn't have it in her to scold him, he never listened anyway. She nodded at his words before she gracefully mounted Fable. Her slim fingers curled around the reins as she gripped them in her small hands. She took a few deep breaths before kicking Fable into an easy trot to start. Fable didn't seem to agree with her though, picking up his pace with each step until he had worked his way up to a canter. Des allowed him to speed up so far before she kept more of a handle on his speed. As she guided Fable around the arena her red lips curled up into a huge, genuine smile that lit up her whole face as her emerald green eyes shone with delight. She loved it all: the sound of Fable's hooves hitting the dirt, the feel of the wind passing her as she and Fable rounded corner after corner, the feel of all her problems and fears washing away, rider and horse moving in sync.

Denver watched her with a serious grin on his lips; This was his plan, alright. He knew that his sister, Lizbeth didn't have time to ride Fable as often, and he didn't know exactly how to mount and ride, let alone exercise a hotheaded, haughty Warmblood stallion. 'Des, you're wonderful on him! Would you like to ride him permanently?' He yelled out to her, 'I mean, obviously he's my sissy a horse, but you can ride him every day if you want. I've already cleared it with her. Some of the shows coming up? You can enter those too if you'd like.' Denver climbed over the fence and leaned against it, now standing in the arena.

When Denver's words reached her ears she was so shocked that she nearly fell right off Fable. Des caught herself before that could happen though and quickly slowed Fable to halt right in front of Denver. Her green eyes were wide in shock and disbelief. "Are you serious?" she asked him, slightly breathless "'cause if you are joking I will murder you in your sleep" she said, narrowing her eyes slightly. The mere thought of riding Fable for an hour or so had her bursting with excitement, being able to ride him everyday had her nearly screaming with joy, but she somehow managed to contain her excitement. The only signs of her pure and utter happiness laying in her eyes.

'No joke. You work so hard and its clear your a much better rider then I am. After all, you can actually ride a horse and mount it without getting on backwards.' He had to turn everything into a joke to deflect from his real feelings on things. Reaching out to pet Fable, the horse snorted and he stepped back, slightly fearful. 'I-, yes, dear. You'll get to ride him as much as you want as long as you care for him. Liz said you'll be reporting to me on his progress.' Denver winked casually and grinned, recessing back to his spot on the fence. Slowly, he glanced at her with a mischievous grin on his lips. 'So what'd ya say?' He questioned, cutely.

Des shot him a flat look at his joke, but cracked a slight smile after a moment. She steadied Fable when he backed away from Denver, something that made her shoot him a look that said: wow, even the horse is scared of you."Thank you for this Denver" she said, her voice soft as she looked away from him awkwardly. She wasn't used to people doing kind things for her, especially not something like practically giving her a horse. When he asked her what she thought she gave him a "duh" look "of course I'd love to do it" Des said, nodding her head vigorously. A smile formed on her lips once again as she looked down at Fable below her.

'You've gotta work hard, now. As you can tell hes kind of brutesque, like the mother in law you'll have when we get married someday.' He said with a slight teasing smirk, winking at her. 'And we have lots of little equestrian babies,' He added, and then laughed hard at his own words. Looking up at her, Denver was about to say something incredibly flirty when he wasn't paying attention and slipped right off the fence, bumping his head against the rail. His vision went pitch black for a moment and then it came back to him a few minutes later, to which he stood up slowly.

((Desiver babies would be adorable xD Although I'm pretty sure it must be coincidence that everyone is getting hurt, maybe. ;)))

Des narrowed her eyes slightly at the mention of them marrying one day. "Not even in your dreams Den-" her words immediately were cut off by a gasp that passed her lips when she saw him fall. Without a moments hesitation she was off Fable, tying him up and rushing to Denver's side. "Denver! Are you okay?" she asked him, her sweet voice filled with concern and worry. As he slowly stood she took his arm and moved it so it was around her shoulders, allowing her to help him stand and keep him upright. "Please tell me you're alright" she said as she let her eyes drift to where he hit his head. She and Denver had their differences and he may have been annoying, but in a strange way, she still considered him a friend and she was just as worried about him as she would have been if it had been Jason, her best friend, instead.

((They would be so cute! Eh, it gives them all a chance to be all cute and concerned xD))