Mod
these are coaches and crew for racers who need them!


Name:
Last:
age:
gender:
look:
personality:
history:
why they are in prison:
crew:*What do they do in the crew? Coach,car repairs, ect*
other:

Name: Lena (Called by her last name because other inmates think her name is too girly.)
Last: Lennon
age: 19
gender: Female
look: 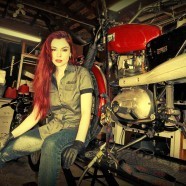 personality: Lennon is a sarcastic not looking for anything in life but how to get to tomorrow. That's not too much to ask is it?
history: Lennon was raised in a home of racers and by default was taught how to repair all of the cars that even passed onto her family's race track, but one day she found herself alone and hungry. So she did the logical thing and began stealing food. She was caught after stealing two thousand dollars worth of food and on instinct, she fought back not wanting to be arrested. Trapped. So she was sent straight here.
why they are in prison: Theft and Assult
crew: Mechanic
other: Best mechanic you'll find for miles.

Anyone wanna be alex's crew member?